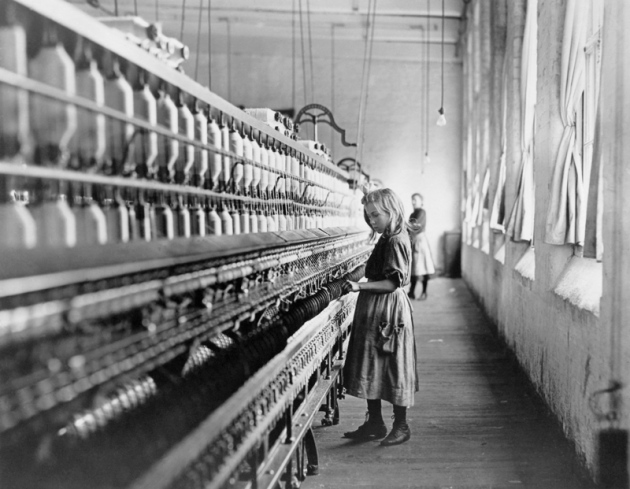 The right to form unions usually came before child labour protections in a country's constitution.

Timing can be everything when it comes to successfully expanding constitutional rights. Now, a study1 looking at how constitutions around the world have evolved has revealed patterns that could help people predict the best moment to introduce such changes.

Amendments are generally introduced into a country’s constitution in a certain sequence, the authors report in a paper on the preprint server arXiv, and now under review at a journal. In addition, their computer analyses corroborate previously proposed ideas that the addition of some provisions is heavily influenced by the zeitgeist — the dominant social mores of the time — whereas the adoption of others reflects a country’s colonial history.

The study validates computational techniques that could be applied to pressing questions about how constitutions reflect and affect societies, says Mila Versteeg, a legal scholar at the University of Virginia in Charlottesville. “These methods might be able to move the ball if applied to the right questions,” she says.

Organizations and advocates could use the results to push for policies in a more strategic way, say the paper’s authors. “This can be seen as a road map to help get you to where you want to be,” says lead researcher Alex Rutherford, a data scientist who was working at the United Nations children’s agency UNICEF in New York City when the study was conducted.

The ties that bind

Rutherford and his colleagues used two kinds of computer analyses to look for patterns in provisions from the constitutions of 194 countries. In one, using hand-coded text, they found that the number of provisions increased over time (see ‘Evolution of constitutions’). Moreover, the team found that provisions generally appeared in a particular order. Making education compulsory, for example, was usually preceded by the establishment of a right to a free education.

Some of the sequences were less straightforward: the right to form trade unions preceded laws against child labour, for example. This progression probably reflects the identities of the people who have traditionally scripted constitutions, says Rutherford. Adult men, for instance, seem to have considered their own protections before thinking about others, including those who were unable to push for their own rights, he says. “I think we should protect the most vulnerable first, but this paper says this is not how laws have progressed historically.”

The team then performed a network analysis to identify words that the constitutions had in common and to detect how they grouped together. In some cases, with fundamental provisions such as freedom of religion, clusters included countries that had the same former colonizers.

Meanwhile, amendments such as those prohibiting torture or protecting the environment tended to emerge at specific points in time, regardless of a country’s colonial history. “If you draft a constitution now, you’d be more likely to include a clause on the environment than you would 20 years ago, since we didn’t know much about what was going on back then,” says Rutherford. 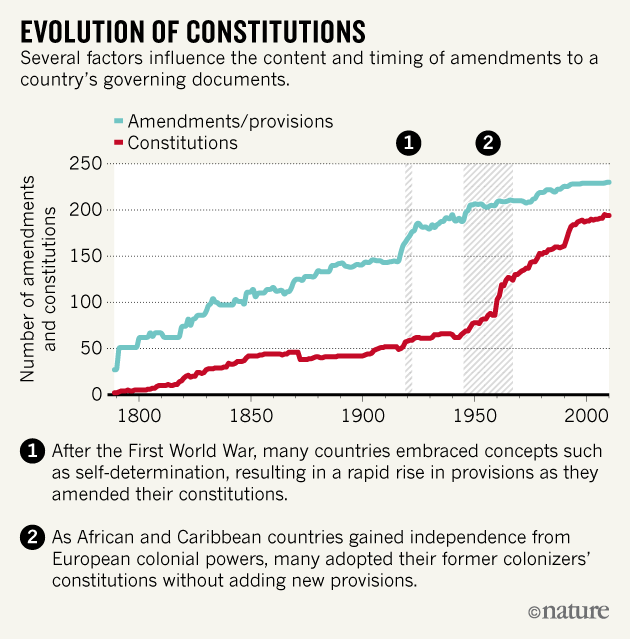 Seeds of the future

Constitutional specialists say the team’s timeline of provisions seems to be new. “It makes intuitive sense, but I don’t think anyone had tried to show it empirically,” says David Law, a political scientist at Washington University in St Louis, Missouri. The indexed data that Rutherford and his colleagues used came from the Comparative Constitutions Project, a US-based non-profit organization partnered with Google. The project hand-codes constitutional texts by turning the words into zeroes and ones.

The credibility of the network approach is boosted by the fact that the analysis of constitutional language came to similar conclusions as previous, less-automated studies. Versteeg suggests that network analysis might next be applied to questions such as what sorts of rights are not well enforced, and whether constitutions can yield subtle clues signalling that a democracy is in decline.

To get at the latter query, Versteeg suggests analysing constitutional texts from democratic countries that have altered their constitutions and become increasingly authoritarian — such as Hungary and Turkey — to find language that gives a ruler more power. Next, researchers could search for these signatures in other countries, such as the United States. “Could we tell when added rights are actually red flags bearing the signs of authoritarianism?” Versteeg asks.