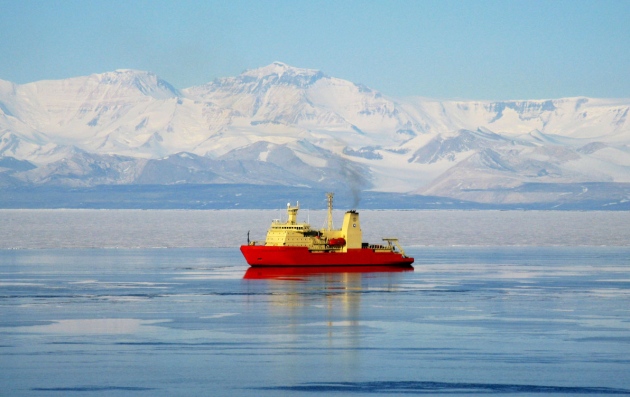 The icebreaker Nathaniel B. Palmer of the US Antarctic Program is part of a rapidly shrinking fleet.

They already have to contend with cruel seas and crueller grant reviewers, but American marine scientists may face an even bigger problem: barring major investment, the federal oceanographic fleet is going to be down to half its current size by 2026.

At the end of May, the White House released an assessment of the vessels run by its various agencies for research and survey work. It shows a fleet battered by multiple issues. Government pressure on budgets has led to a number of ships being sold or mothballed, staffing costs have increased and fuel costs for research ships have risen fourfold since 2003.

“The community is deeply concerned that the ability to go to sea will be significantly reduced in the next decade, as research ships are retired or laid up,” says Mark Abbott, dean of the College of Earth, Ocean, and Atmospheric Sciences at Oregon State University in Corvallis. The average age of the ships is more than 23 years, and many are scheduled to retire in the coming years. Unless new vessels are built, the total number of vessels available to scientists will plummet (see graph).

Abbott, who is president of the Oceanography Society based in Rockville, Maryland, says that the community is also concerned by the rising costs of operating ocean facilities, which restrict the money available for science.

Not all news about the fleet is bad. The Sikuliaq, a new vessel for use in polar regions, has been funded, and two research ships are being built by the US Navy. The Neil Armstrong and the Sally Ride will be operated by the Woods Hole Oceanographic Institution in Massachusetts and the Scripps Institution of Oceanography in San Diego, California, respectively. But these vessels, even if they enter service as scheduled, will not be sufficient to stem the decline of the fleet. 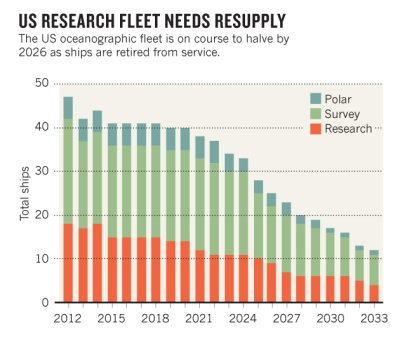 More help could come from the National Science Foundation, which is looking into commissioning another three ships, currently called the Regional Class Research Vessels. But no decision on whether these will actually be built has yet been taken.

Reimers says that the community is “is quite concerned about the lack of growth in support for the core disciplinary research and facilities” but that “some decrease in fleet capacity is viewed as necessary to make way for more capable, modern vessels”.

The more aged parts of the fleet lack features crucial for much research, such as the ability to stay exactly in position at sea. So a decline in numbers may be in part offset by an increase in the capabilities of those vessels in service.

The report states that modernization efforts mean that there will be nine retirements and six additional ships in the fleet up to 2022. “With the introduction of highly advanced ships and the retirement of older, less-capable vessels, the Fleet will become more efficient and capable of supporting stakeholders’ demands over the next decade,” it says. However, after 2022, “the Fleet will experience a reduction in size and capacity due to several vessels nearing their projected end of service life”.

For reasons that are not entirely clear, the number of requests for ship time on the academic fleet also seems to be declining. However, demand still outstrips supply, and this disparity is likely to worsen.

“I foresee a continued demand for ships, consistent with what it’s been in the past several decades,” says David Checkley, a marine scientist at Scripps. “The decline in fleets that’s projected is worrisome. We need an investment that is congruent with very large projects that governments undertake if we’re to continue to study the oceans.”