Obama’s budget US President Barack Obama’s fiscal year 2017 budget plan, released on 9 February, calls for a 4% bump in research and development funding. But science advocates and lawmakers are unhappy with Obama’s decision to boost science by relying on ‘mandatory’ spending rather than on the ‘discretionary’ funding stipulated by Congress, which decides how much money each agency will receive. Obama has requested $8 billion for the National Science Foundation, up 6.7% over 2016’s estimate. The request for the National Institutes of Health is $33.1 billion, up 2.6%, and NASA’s budget request is $19 billion, down $300 million. See go.nature.com/hr9j6d for more. 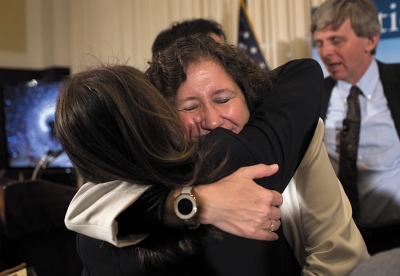 Gravitational waves ring out Delighted physicists at the Advanced Laser Interferometer Gravitational-Wave Observatory (LIGO) revealed on 11 February that they had heard the gravitational ‘ringing’ produced by the collision of two black holes about 400 million parsecs (1.3 billion light-years) from Earth. The black holes, about 36 and 29 solar masses, merged into a single, gravitational sink in space-time weighing 62 solar masses. The merger temporarily radiated more energy — in the form of gravitational waves — than all the stars in the observable Universe emitted as light in the same amount of time. See page 261 for more.

Resistance rising Bacteria in humans and animals across Europe continue to show significant resistance to common antimicrobial treatments. The European Centre for Disease Prevention and Control and the European Food Standards Agency said in a joint report on 11 February that “high to extremely high” levels of resistance to multiple drugs were seen in some types of Salmonella in 2014. Resistance that would “significantly” reduce the effective treatments available was also seen in some Campylobacter types. Resistance to colistin — a last-resort antibiotic treatment — in Salmonella and Escherichia coli was found in chickens.

Asian genomes An effort to sequence the genomes of 100,000 people from Asia was announced on 11 February. The GenomeAsia 100K project, hosted by Nanyang Technological University in Singapore, aims to characterize the genomes of individuals from an initial list of 19 countries across the continent. The project will also gather medical information and microbiome samples. The project consortium says that the biology of the world’s Asian population is under-represented in scientific research, and hopes that its results will accelerate precision-medicine applications for Asian patients.

LISA masses freed Less than a week after the first detection of gravitational waves was announced (see page 261), a European Space Agency (ESA) probe has demonstrated a crucial technology for future space-based detectors of the waves. On 16 February ESA said that its LISA Pathfinder mission performed one of its most delicate stages — to suspend two small solid test cubes freely in a vacuum enclosure inside the probe. The spacecraft launched on 3 December and on 23 February will begin its science mission by bouncing a laser beam between the two cubes in freefall.

Gas leak plugged A huge gas leak at a storage facility of the Southern California Gas Company has been “temporarily controlled”, the firm says. A 13 February assessment by California’s Air Resources Board suggests that 94,000 tonnes of natural gas have escaped during the leak in Aliso Canyon, which was first detected on 23 October, and declared an emergency by the state governor in January. In an 15 February statement, Southern California Gas Company said that it was now cementing the leak to permanently seal the well.

Philae’s long sleep The European Space Agency (ESA) has given up hope that their comet-probing lander, Philae, will ever work again. On 12 February, the space agency announced that Philae, the Rosetta spacecraft’s lander, was entering “eternal hibernation”. Philae landed on comet 67P/Churyumov-Gerasimenko in November 2014 and operated for 64 hours before going into hibernation. The craft last sent a signal to scientists in July last year. ESA scientists are no longer sending signals to the lander, and say the chances of hearing from it again are “close to zero”. 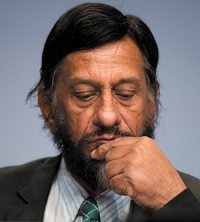 Pachauri protests Rajendra Pachauri (pictured) was appointed executive vice-chairman of Delhi-based think tank The Energy and Resources Institute (TERI) on 8 February. Last year, Pachauri resigned as chair of the Intergovernmental Panel on Climate Change after claims that he had sexually harassed a now-former TERI employee. He was also replaced as TERI director-general. On 10 February, a second former employee accused Pachauri of sexual harassment. Alumni of TERI University have started a petition in protest against Pachauri’s appointment, and the scientist has taken a voluntary leave of absence.

Italy GM reprimand The University of Naples in Italy formally reprimanded 11 scientists, including laboratory chief Federico Infascelli, on 10 February, after an investigation committee concluded that three research papers co-authored by them contained manipulated data. The papers’ two corresponding authors are also forbidden from publishing for two years without approval from their department director. The papers claimed that animals were harmed by eating genetically modified feed. Police in the Veneto region used Infascelli’s work to justify destruction of a genetically modified crop last year; the farmer is now seeking compensation.

KI head resigns Anders Hamsten, the vice-chancellor of the Karolinska Institute (KI) in Stockholm, has resigned after acknowledging that he mishandled an investigation into surgeon Paolo Macchiarini. The KI will also reopen its misconduct inquiry into Macchiarini, it announced on 13 February. In an open letter in the Swedish newspaper Dagens Nyheter, Hamsten wrote that he had “completely misjudged” Macchiarini, who has been accused of research misconduct and ethical breaches in his work implanting artificial windpipes into patients. Last August, Hamsten cleared Macchiarini after an external investigation found that the surgeon had committed misconduct in seven research papers. See go.nature.com/7bpza6 for more.

Renewables rise Energy from renewable sources reached 16% in 2014 in the European Union, up from 15% in 2013, according to 10 February figures from Eurostat, the EU’s statistical office. The EU as a whole has a target to get 20% of its energy from renewables by 2020, with individual countries having different burdens. In 2014, Finland had the biggest increase in renewables, increasing by 2 percentage points, whereas Bulgaria slipped by 1 percentage point — although both countries remain on track to make their targets by 2020. 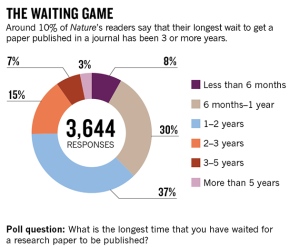 An online poll answered by more than 3,600 Naturereaders suggests that some 10% have waited at least 3 years for one or more of their papers to be published in a journal (see Nature 530, 148–151; 2016). But more than one-third had never waited longer than a year. Readers were also asked what they thought was the best way to speed up publication. More than 40% suggested that peer reviewers should stop asking for unnecessary revisions, and 22% asked journal editors to make quicker, clearer decisions.

The number of species of living sharks, skates, rays and chimaeras, according to a list collated at the University of Hamburg, Germany. The list includes 509 species of shark, 630 skate and ray species and 49 species of chimaera fish, a cartilaginous species.
Source: S. Weigmann J. Fish Biol. http://doi.org/bcj4 (2016).

22–28 February
The 4th session of UNESCO’s Plenary of the Intergovernmental Science-Policy Platform on Biodiversity and Ecosystem Services (IPBES) convenes in Kuala Lumpur.
go.nature.com/p43aaz