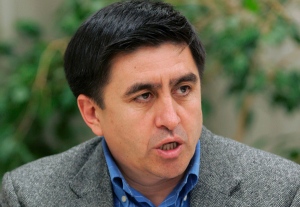 Shoukhrat Mitalipov says honest mistakes were made in a push to get cloning results published quickly.

A blockbuster paper that reported the creation of human stem-cell lines through cloning has come under fire. An anonymous online commenter found four problems in the paper, which was published online on 15 May in the journal Cell1.

Shoukhrat Mitalipov, who led the stem-cell team, told Nature that three were innocent mistakes made while assembling the data. The fourth, he says, was not a problem at all. To many in the field there was an unfathomably rapid rush to publication: just three days from submission to acceptance and another 12 days to publication.

“The results are real, the cell lines are real, everything is real,” says Mitalipov, a reproductive-biology specialist at the Oregon Health and Science University in Beaverton.

Mitalipov says he returned from Europe on Wednesday and found himself swamped with e-mails and calls from editors at Cell, as well as from journalists. “I just got home a couple hours ago. The editors, everyone was going crazy,” he says.

Mitalipov says he consulted first author Masahito Tachibana, who compiled the data for the paper, and confirmed that the paper contains simple errors. The scientists say that they plan to talk to Cell today to discuss an erratum.

The problems were raised in a critique on PubPeer, a website where people can make anonymous comments about published papers.

The first problem was an image duplication. Figure 2F, which shows a cloned stem-cell colony “with typical morphology”, is reproduced in the top left of Figure 6D where it is labelled as “hESO-7” — an embryonic stem-cell line derived not from cloning but from in vitro fertilization (IVF). Mitalipov says that the duplication was intentional but that the labelling was reversed. The top left panel in 6D should have been labelled hESO-NT1, indicating a cloned colony, as in Figure 2F. The top right figure should have been hESO-7.

Even so, the decision to use the same image to illustrate two different properties, once to show typical morphology (2F) and once as a basis for comparison of cell markers between embryonic stem cells from normal IVF embryos and cloned embryos (6D), is “not ideal,” says Martin Pera, a stem-cell expert at the University of Melbourne, Australia. “It’s considered bad form, unless you have a reason to do it.”

Mitalipov says the decision was made because of the limited number of available photographs that had a measure bar on the image.

The anonymous critic pointed out that the paper also contained duplications in scatterplot images, which show that the types of genes activated in the cloning-derived cell lines are similar to those in stem cells derived from IVF embryos — evidence that cloning yields true stem cells. In Figure S6 in the supplementary data, two scatterplots are identical. Mitalipov says that the wrong data were used for one scatterplot and that it will be replaced by the correct scatterplot.

Another question concerned other scatterplots in the supplementary data (also Figure S6). Two of them show a thin line indicating a very high degree of overlap — each is 99.8% — in the pattern of gene activity  between two cell ‘replicates’. These are cloned stem cells from the same original colony that were then cultured in different plates. One would expect those patterns to be close, but the anonymous critic said that they are too close. Mitalipov says that they just turned out that way and that the raw data are online for anyone to look at.

“The explanations [by Mitalipov] are plausible, but we will have to wait for the results of a thorough investigation,” says Pera.

Robin Lovell-Badge, who heads the Division of Stem Cell Biology and Developmental Genetics at the Medical Research Council's National Institute for Medical Research in London, also warns against quick judgement. “I expect the errors above were also due to the rush to publish. The authors should be given a chance to answer and correct mistakes.”

Anyone with access to the cells should be able to confirm that they were created by cloning. The embryonic stem-cell lines should have the nuclear DNA from the fibroblast cell line that was cloned — a line widely used by the scientific community (or available from Mitalipov) — but mitochondrial DNA from the egg donor.

Mitalipov is now consulting his institutional review board and putting together material-transfer agreements with some ten institutions so that others will have a chance to see his cells. “The first thing we want to do is have people confirm our results,” he said. “We are not hiding these cell lines.”

Many scientists were shocked that Cell accepted the paper in just three days, especially given the scientific and ethical controversies surrounding the field of cloning. The last group that claimed to have created human embryonic stem-cell lines from cloning — led by Woo Suk Hwang, then a professor at Seoul National University in South Korea — produced two papers, in 2004 and 2005, which both turned out to be full of fabricated data that papered over the fact that the group had never produced cloned cell lines. The first doubts to emerge came in the same form: duplicated and manipulated images.

"Whatever the explanation is, it's amazing that there is another issue with a paper in SCNT [somatic-cell nuclear transplantation]. The four-day review process was obviously inadequate,” says Arnold Kriegstein, director of the stem-cell programme at the University of California, San Francisco. “It's a degree of sloppiness that you wouldn't expect in a paper that was going to have this high profile. One worries if there is more than meets the eye and whether there are other issues with the work that are not as apparent.”

Six years ago, when Mitalipov created cloned embryonic stem cells in monkeys, editors at Nature forced him to wait some six months for publication until the feat was verified independently. Both the original paper and the confirmatory data were published together2, 3. “This time, we’re a trusted lab. We had already shown our results were real,” Mitalipov said.

Mitalipov admits he wanted to rush publication this time so that he could present results at the International Society for Stem Cell Research meeting in June. “Maybe it was rushed. But it was nothing to do with Cell,” he said. “It was my mistake.”

He plans to issue an erratum quickly. “We are working with Cell to have a proper statement.” Mitalipov said he takes full responsibility for the final results, even though Tachibana assembled the data. “There was lots of stress in putting together all these images. I don’t want to say this was his fault.”

But he stands by the results. “I personally made the cell[s] and, with Masahito, I saw them grow into colonies.”

Cell has now published a statement responding to the errors in the paper.

“Based on our own initial in-house assessment of the issues raised in PubPeer and in initial discussions with the authors, it seems that there were some minor errors made by the authors when preparing the figures for initial submission,” Cell's editorial team said in a statement sent Thursday afternoon. “While we are continuing discussions with the authors, we do not believe these errors impact the scientific findings of the paper in any way.”

Cell also defended its rapid review of the paper. “The comparatively rapid turnaround for this paper can be attributed to the fact that the reviewers graciously agreed to prioritize attention to reviewing this paper in a timely way. It is a misrepresentation to equate slow peer review with thoroughness or rigor or to use timely peer review as a justification for sloppiness in manuscript preparation,” the statement said.