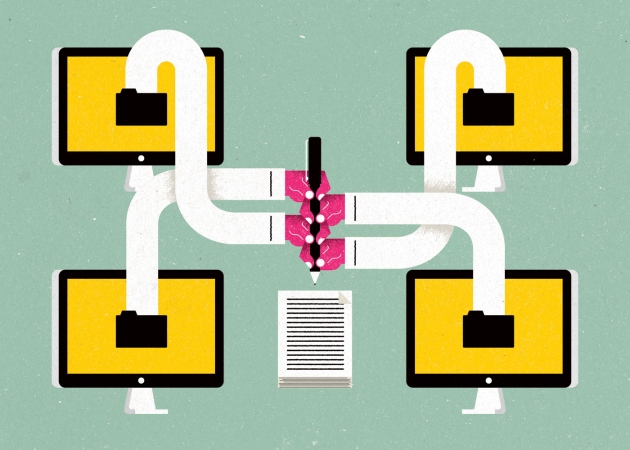 When Fernando Cagua was preparing to write up his findings on the economics of whale-shark tourism, he didn't fire up Microsoft Word. He opened his web browser.

Cagua, an ecologist at King Abdullah University of Science and Technology in Thuwal, Saudi Arabia, was keen to try out an online writing environment that would allow him and his three co-authors to work on the same paper simultaneously. Over the past few years, a small cadre of tools have sprung up expressly for this purpose. Although the features vary, each is designed to ease a key difficulty in writing multi-authored research papers: handling collaboration. And some of the creators have wider ambitions — to fundamentally alter the way that scientific papers are written and published.

Writing a paper is traditionally a stepwise process. One author shares drafts with colleagues and then waits for everyone to reply or moves forward independently, folding in revisions and queries as they arrive. The more co-authors, the more complicated this gets, says Russell Neches, a microbiology PhD student at the University of California, Davis. “Managing that process can be more difficult, more time-consuming and more work than the research itself,” he says.

Collaborative tools simplify this process by allowing multiple authors to edit and format an online document at the same time. The most widely used general-purpose collaborative writing app is probably Google Docs — essentially a stripped-down, online version of Microsoft Word. But there are also more-technical tools designed specifically for researchers. These applications add options such as the ability to control a document's layout and to add citations in a way that suits scientific manuscripts. The tool that Cagua had his eye on, for instance, writeLaTeX, was so named because it uses the typesetting computer language LaTeX — popular among physical scientists and mathematicians for rendering mathematical formulas, tables and figures. (The tool is produced by a company also called writeLaTeX, supported by Digital Science, a division of Macmillan, which publishes Nature. In January, the firm relaunched the tool and renamed it Overleaf.) Other scholar-focused online writing apps include shareLaTeX, Fidus Writer and Authorea.

A minority of researchers use these apps, but their number is growing. In the past year, registered users of Overleaf have reached 100,000, says writeLaTeX co-founder John Hammersley, and they have created more than 1.4 million documents with the tool. Authorea has 10,000 users, according to its co-founder Alberto Pepe. Jenna Morgan Lang, a postdoc in the same group as Neches, says that she has one Authorea-written paper in preprint and six more in development. “I do love it,” she says, “and I tell everyone who will listen that they should be using it, too.”

At the heart of the collaborative approach is the way the tools keep track of different versions of the same document. Authorea, for example, breaks documents into user-defined, paragraph-sized chunks that only one author can edit at a time, but multiple researchers can work on different sections of a document simultaneously. The system records every change in a document history. “You can go back and understand how a scientific paper evolved from the first word to the last,” says Pepe.

For Authorea, that concept is based on the software-management system Git, used by programmers to keep track of changes on collaborative code-writing projects, and by data scientists to record their analysis workflow. Other tools take different approaches: Google Docs and Fidus Writer allow all users access to the entire file simultaneously, and track changes more or less like Microsoft Word, but Fidus Writer, for example, does not record the detailed history of every single edit (although a user may save time-stamped document versions). Overleaf allows both a version history and a track-changes facility — but the latter is available only to paying subscribers. Although each tool offers a free account, only researchers willing to pay monthly fees (US$7–12 for Overleaf and $5–25 for Authorea) can access the advanced features, such as more storage space or private accounts.

The tools are much more than just word processors and collaboration managers, however. Authorea allows users to build and format bibliographies by searching and importing references from PubMed or CrossRef, or using DOIs (digital object identifiers); Overleaf allows imports from reference managers Zotero and CiteULike. Authorea also enables users to export documents in any of about 40 different journal formats, including those of Nature, Science and Proceedings of the National Academy of Sciences. By recasting the same data through different journal filters, “it's a bit like Instagram for scientific papers”, Pepe wrote in one blogpost.

At writeLaTeX, Hammersley has ambitions to integrate the writing and publishing of articles even more closely. Users can click a button to transmit their article directly to journal editors; the company currently has arrangements with around a dozen journals, and many more will follow in the next few months, Hammersley says. However, Cagua says that he did not find the process particularly automatic with a paper he transmitted to PeerJ; he had to resubmit information in his original LaTeX file that was not automatically picked up by the journal. But Hammersley says that integration with journals is a work in progress. Ultimately, he hopes that a paper's author and its journal editor might collaborate on the article together in the browser window.

Cagua also ended up writing most of his whale-shark paper in Google Docs, because his co-authors were not well versed in LaTeX and so found the original writeLaTeX “too intimidating”. A raw LaTeX file — text interspersed with code that tells typesetting programs how to display the prose and figures — can look off-putting to the uninitiated, or just ugly, like reading the HTML source code behind a web browser's display. In the relaunched version, Overleaf, a rich-text editing environment hides the code and makes writing friendlier for non-experts. Fidus Writer and Authorea also support LaTeX, as well as other computer languages for controlling the display of raw text, including HTML and Markdown.

Authorea's “fundamental mission”, Pepe says, “is to re-imagine the scientific article”. Conceived to advance the open sharing of scientific research, the program supports software such as IPython notebooks, which allow readers to explore and manipulate the data underlying published figures. “We believe in the idea of an interactive, data-driven article,” Pepe explains — an idea that he has explored in a prototype 'Paper of the future' (see go.nature.com/plgshx). A few journals are cautiously experimenting with interactive graphics and data in their articles, although for the most part, this is still rare.

“We believe in the idea of an interactive, data-driven article”

An Authorea-written document can double as both a readable paper and an online research notebook containing raw data, notes Alyssa Goodman, an astronomer at Harvard University who was Pepe's postdoctoral adviser when he developed the software. “The part you can read that looks like a paper is the tip of the iceberg that describes everything underneath,” she explains.

Using that feature, Neches collaborated with two researchers in Michigan who he chatted with on Twitter but has never met in person. Together, they studied whether materials printed with a 3D printer were sterile for use in bacterial culture experiments. Authorea, he says, provided a forum for team members to upload raw data and methods, from which they could co-assemble a manuscript online. “It was very much as though we had created a laboratory in which we worked together,” he says. “It probably would not have happened at all without a tool like Authorea existing.”