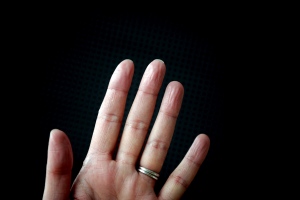 Scientists think that they have the answer to why the skin on human fingers and toes shrivels up like an old prune when we soak in the bath. Laboratory tests confirmed a theory that wrinkly fingers improve our grip on wet or submerged objects, working to channel away the water like the rain treads in car tyres.

People often assume that wrinkling is the result of water passing into the outer layer of the skin and making it swell up. But researchers have known since the 1930s that the effect does not occur when there is nerve damage in the fingers. This points to the change being an involuntary reaction by the body's autonomic nervous system — the system that also controls breathing, heart rate and perspiration. In fact, the distinctive wrinkling is caused by blood vessels constricting below the skin.

In 2011, Mark Changizi, an evolutionary neurobiologist at 2AI Labs in Boise, Idaho, and his colleagues, suggested1 that wrinkling, being an active process, must have an evolutionary function. The team also showed that the pattern of wrinkling appeared to be optimized for providing a drainage network that improved grip. But until now, there was no proof that wrinkly fingers did in fact offer an advantage.

In the latest study, participants picked up wet or dry objects including marbles of different sizes with normal hands or with fingers wrinkled after soaking in warm water for 30 minutes. The subjects were faster at picking up wet marbles with wrinkled fingers than with dry ones, but wrinkles made no difference for moving dry objects. The results are published today in Biology Letters2.

"We have shown that wrinkled fingers give a better grip in wet conditions — it could be working like treads on your car tyres, which allow more of the tyre to be in contact with the road and gives you a better grip," says Tom Smulders, an evolutionary biologist at Newcastle University, UK, and a co-author of the paper.

Wrinkled fingers could have helped our ancestors to gather food from wet vegetation or streams, Smulders adds. The analogous effect in the toes could help us to get a better footing in the rain.

Changizi says that the results provide behavioural evidence "that pruney fingers are rain treads", which are consistent with his own team's morphological findings. What remains to be done, he adds, is to check that similar wrinkling occurs in other animals for which it would provide the same advantages. "At this point we just don't know who has them, besides us and macaques.”

Given that wrinkles confer an advantage with wet objects but apparently no disadvantage with dry ones, it's not clear why our fingers are not permanently wrinkled, says Smulders. But he has some ideas. “Our initial thoughts are that this could diminish the sensitivity in our fingertips or could increase the risk of damage through catching on objects."