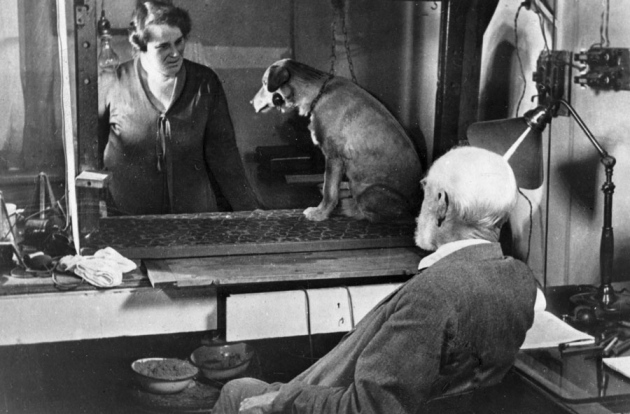 Pavlov watches an experiment with one of his dogs in 1934.

Physiologist Ivan Pavlov conditioned dogs to associate food with the sound of a buzzer, which left them salivating. Decades later, researchers discovered such training appears to block efforts to teach the animals to link other stimuli to the same reward. Dogs trained to expect food when a buzzer sounds can then be conditioned to salivate when they are exposed to the noise and a flash of light simultaneously. But light alone will not cue them to drool.

This ‘blocking effect’ is well-known in psychology, but new research suggests that the concept might not be so simple. Psychologists in Belgium failed to replicate the effect in 15 independent experiments, they report this month in the Journal of Experimental Psychology1.

“For a long time, you tend to think, ‘It’s me’ — I’m doing something wrong, or messing up the experiment,’” says lead author Tom Beckers, a psychologist at the Catholic University of Leuven (KU Leuven) in Belgium. But after his student, co-author Elisa Maes, also could not replicate the blocking effect, and the team failed again in experiments in other labs, Beckers realized that “it can’t just be us”.

The scientists do not claim that the blocking effect is not real, or that previous observations of it are wrong. Instead, Beckers thinks that psychologists do not yet know enough about the precise conditions under which it applies.

The blocking effect underpins the idea that surprising or unexpected experiences drive learning. A dog being trained to associate a sound with the arrival of food will at first find that noise novel — reinforcing the notion that sound equals kibble. Once that link is made, any attempt to link another stimulus to the delivery of food will seem redundant, and fail. Studies of the brain’s dopamine system seem to confirm this idea: the levels of dopamine — a chemical that signals pleasure — surge higher after an unexpected reward than an expected one.

But the latest study suggests that the process of learning might be more complicated than scientists had realized. The research is part of a broader push in the social sciences to test the reliability of published results — an effort that has led some researchers to suggest there is a ‘replication crisis’ afoot, because many results that seem solid cannot be reproduced. Last year, for example, a team led by Brian Nosek, a social psychologist who directs the Center for Open Science in Charlottesville, Virginia, sought to replicate the published findings of 98 psychology papers; 61% of their attempts failed to do so.

Nosek says that if the latest findings on the blocking effect are confirmed by further research, that could help scientists to better understand how learning happens.

In their experiments, Beckers and his colleagues tested different types of sensory stimuli, ways of delivering food pellets and species of rats and mice. The team also used different researchers to conduct each experiment. In every case, they failed to observe a statistically significant blocking effect.

“It’s remarkable that a team of researchers is able to publish so many null results,” says Eric-Jan Wagenmakers, a psychologist at the University of Amsterdam. “This would have been impossible 10 years ago.“

Nevertheless, the analysis has limitations. Many of the replication experiments have small samples, with only eight animals. Some also used mice, which don’t react as predictably as rats. Aspects of the experimental design could explain why the team did not observe the blocking effect, says David Shanks, a psychologist at University College London.

One way to investigate further, he says, would be to 'pre-register' a multi-lab project to examine the blocking effect. Pre-registration would require the study's organizers to record their methods, and the outcomes they plan to measure, before they start experiments — and pledge to publish their results, no matter what they find. This would allow different groups of scientists, including strong proponents of the blocking effect, to run standardized experiments on the phenomenon.

“It’s nice that there’s a replication debate that isn’t about people hurling insults at each other,” says Shanks. “There’s actually some intellectual substance to it.”

An earlier version of this story erroneously gave the date of the photo as 1904.