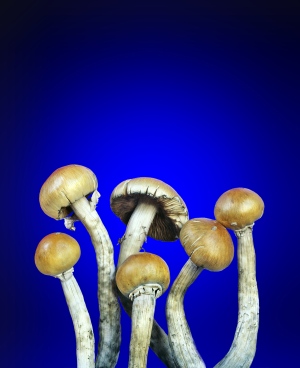 Eating these may open the "doors of perception" by decreasing brain activity.

Far from expanding your mind, the hallucinogenic chemical found in magic mushrooms induces widespread decreases in brain activity, researchers report today in the Proceedings of the National Academy of Sciences1.

Psilocybin has been revered for centuries for its ability to induce mystical experiences, and has potential therapeutic value for various psychiatric conditions. The drug is known to activate serotonin receptors, but how this produces its effects is little understood.

In one of the few studies of its kind, David Nutt, a neuropsychopharmacologist at Imperial College London, and his colleagues used functional magnetic resonance imaging to monitor the changes in brain activity during the transition from normal consciousness to the psychedelic state induced by psilocybin.

The researchers recruited 30 volunteers, all experienced users of hallucinogenic drugs, and scanned their brains twice: once after the participants had been given a salt-water placebo and once after the injection of a moderate dose of psilocybin, which produced a short 'trip' that came on within seconds.

“Psychedelics are thought of as ‘mind-expanding’ drugs, so it has commonly been assumed that they work by increasing brain activity,” says Nutt. “Surprisingly, we found that psilocybin actually caused activity to decrease in areas that have the densest connections with other areas.”

The largest decreases were observed in the the medial prefrontal cortex (mPFC) and the anterior and posterior cingulate cortices (ACC and PCC, respectively). The scans also showed a reduction in functional connectivity between the mPFC and PCC, so that their normally synchronous activity was de-synchronized.

Furthermore, the intensity of the drug’s effects — as reported, subjectively, by the participants — was closely related to the extent of decreased ACC and mPFC activity, with the strongest effects associated with the largest decreases.

The mPFC, PCC and thalamus are thought to act as 'connector hubs' that have a pivotal role in co-ordinating the flow of information through the brain2, and the researchers say that this accounts for the effects of hallucinogens, which induce a state of “unconstrained cognition”.

In his 1954 book The Doors of Perception, novelist Aldous Huxley, who famously experimented with psychedelics, suggested that the drugs produce a sensory deluge by opening a “reducing valve” in the brain that normally acts to limit our perceptions.

The new findings are consistent with this idea, and with the free-energy principle of brain function developed by Karl Friston of University College London that states that the brain works by constraining our perceptual experiences so that its predictions of the world are as accurate as possible.

Nutt and his colleagues suggest their results could explain some of the therapeutic effects of psilocybin. Depression involves hyperactivity in the mPFC, leading to the pessimistic outlook and pathological brooding characteristic of the condition, so mPFC deactivation could alleviate those symptoms.

The researchers also observed reduced blood flow to the hypothalamus, and suggest that this explains anecdotal reports that psychedelics alleviate symptoms of cluster headaches, which are associated with increased hypothalamic activity.

However, Nutt’s findings conflict with those of other studies.

“We have completed a number of similar studies and we always saw an activation of these same areas,” says Franz Vollenweider at the University of Zurich in Switzerland. “We gave the drug orally and waited an hour, but they administered it intravenously just before the scans, so one explanation is that the effects were not that strong.”

And according to Keith Laws, a neuropsychologist at the University of Hertfordshire, UK, the results could be explained in another way. “Deactivation of the mPFC and PCC are linked to anxiety and anticipation of pleasant and unpleasant experiences,” he says. “This is a stressful situation, even for experienced drug users, and I suspect that they measured something to do with anxiety.”