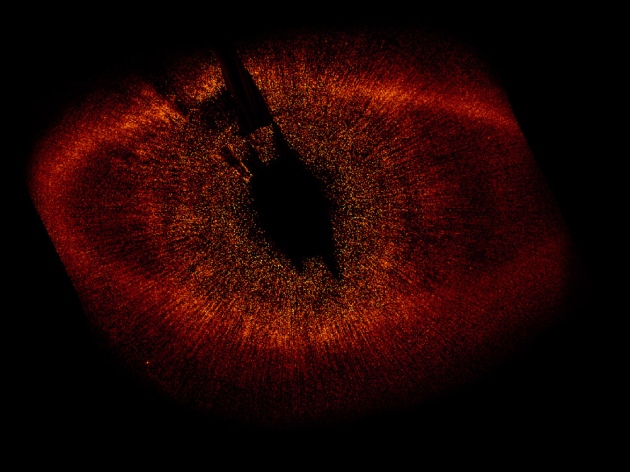 Irregularities in the debris disk around the star Fomalhaut may just be due to the dynamics of orbiting dust rather than to the presence of planets.

The narrow, sharp-edged and slightly off-centre rings of dust that surround some stars may be the result of interactions between gas and dust, rather than the gravitational effects of planets, as previously proposed. The finding, published in this week’s Nature1, could dramatically affect estimates of the number of exoplanets hiding in such stellar systems.

Many nearby stars, especially young ones, are surrounded by disks of dust debris, which orbit the stars at distances roughly equivalent to that at which Pluto orbits the Sun. Embedded in some of those disks are dust rings that have unexpectedly crisp edges and slightly lopsided orbits. Wladimir Lyra, an astrophysicist at the California Institute of Technology in Pasadena and co-author of the latest study, says that researchers have often attributed such irregularities to the gravitational tugs of exoplanets that are too dim to be observed directly.

This phenomenon is comparable to the purported sculpting by 'shepherd moons'2, 3 of portions of the ring systems that surround Neptune and Saturn. The star Fomalhaut (HD 216956) displays one of the most prominent examples of dust ring irregularity, and some suggest that a sharp-edged, eccentric ring of dust that surrounds the star is linked to the presence of planet-sized objects4.

“It’s often easy to see something you cannot explain, and then blame it on something you cannot see,” says Lyra. But now, detailed computer models developed by Lyra and his co-author Marc Kuchner, an astrophysicist at NASA’s Goddard Space Flight Centre in Greenbelt, Maryland, suggest that scientists need not invoke planets to explain the anomalous structures.

Previous simulations have largely ignored the effects that any gas present in the debris disks might have on dust, says Kuchner. But the team’s models include dust–gas interactions, including those that affect the movement of dust grains in a similar way to air resistance. Lyra and Kuchner also improved representations of the physics of orbiting dust.

Instead of producing only diffuse, circular disks of dust, the models sometimes generated well-defined dust rings with offset orbital paths — just like those seen around Fomalhaut and other nearby stars. “We were amazed when we saw the results the models were giving,” says Lyra.

The idea that gas in a dusty debris disk could have such effects had been proposed before, but not analysed in detail, says Douglas Lin, an astrophysicist at the University of California, Santa Cruz. Lyra and Kuchner's results “show that the [dust–gas] interactions indeed occur as envisioned”, Lin says. What makes this research particularly timely, he adds, is that scientists are now discovering debris rings around stars that lie outside our Sun's immediate galactic neighbourhood.

Although exciting, the latest findings cast a pall of uncertainty over estimates for the total number of planets in the galaxy, possibly shifting those projections towards much smaller numbers. “Now, we cannot be sure that an anomalous ring is due to a planet,” says Alexis Brandeker, an astrophysicist at Stockholm University. “We know that there are plenty of planets out there, it’s just that now we can’t say that they’re definitively present in these particular systems.”

But the dust–gas interactions might work alongside hidden planets to sculpt the dust rings, says Lin. It is possible that some of the debris disks with anomalous dust rings do contain planets, he notes. “We just can’t prove it.”