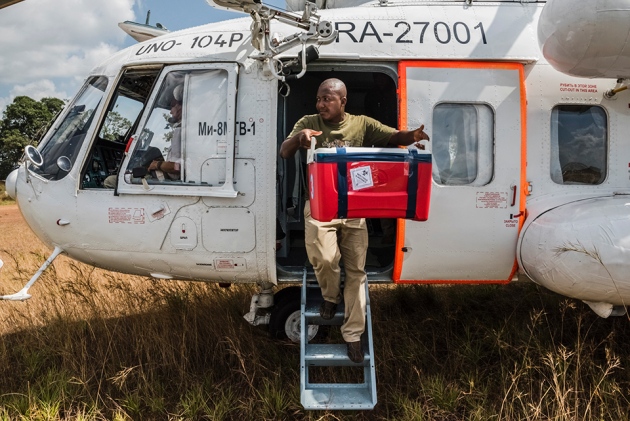 As West Africa’s Ebola outbreak winds down, an effort is under way to make the best use of the tens of thousands of patient samples collected by public-health agencies fighting the epidemic. On 6–7 August, the World Health Organization (WHO) convened a meeting in Freetown, Sierra Leone, to discuss how to establish a biobank for up to 100,000 samples of blood, semen, urine and breast milk from confirmed and suspected Ebola patients, as well as swabs taken from the bodies of people who died from the virus. Held by health agencies in both West Africa and the West, the samples could be valuable in understanding how the current Ebola crisis evolved, preparing for future outbreaks and developing public-health research capacity in a region that depends on outside experts.

“There are many, many ways that this resource could be precious,” says Cathy Roth, an adviser to the WHO directorate in Geneva, Switzerland, which arranged the meeting as part of a series of international discussions about the creation of an Ebola biobank. One of the difficulties is that there is no blueprint for how such a biobank would work, so countries have not yet committed to joining it.

One proposal has been to link existing collections in an online biobank with a reference laboratory in Africa that would hold certain samples — for instance, collections taken from notable groups of patients, or from people who were followed especially closely throughout the course of their disease. Such a facility would be a first for the region; there is currently no high-containment lab in the Ebola zone that is suitable for studies of live, highly dangerous viruses.

Although the samples vastly outnumber those collected in previous outbreaks, they are still a finite resource. Ongoing discussions will need to grapple with who decides what the samples can be used for and what kinds of research should be emphasized.

“We want to have defined research priorities, because these samples do represent an exhaustible resource.”

“We want to have defined research priorities, because these samples do represent an exhaustible resource,” says Ethan Guillen, project manager of the Ebola initiative at Médecins Sans Frontières (MSF) in Geneva, which is advocating for the biobanking project.

Assigning control over these decisions to the three countries where the majority of Ebola cases occurred — Guinea, Liberia and Sierra Leone — is a major priority for MSF. Historically, much research on viral haemorrhagic fevers such as Ebola has been done by scientists in developed countries using samples taken from developing countries. Guillen sees that as part of the reason why, 40 years after Ebola was first documented in Africa, there is not enough public-health capacity in some countries to contain the disease or effective tools to treat or prevent it.

Guillen says that affected countries need a system in which “their scientists have a say in what happens and can learn from the experiences, so there doesn’t have to be such a reliance on outside actors”.

Already, thousands of samples have been shipped out of Africa by foreign government agencies that stepped in to test patients for Ebola during the outbreak. Several, including the US Centers for Disease Control and Prevention (CDC) in Atlanta, Georgia, the European Mobile Laboratory Project and the Pasteur Institute in Paris have expressed cautious support for the biobanking idea.

“CDC is supportive of the concept of Ebola biobanks for samples, particularly in the affected countries, which would offer organizations around the world access to samples from the largest Ebola outbreak in history,” the agency told Nature.

Only the European mobile lab provided detailed information on how many samples it has — about 3,000 in a high-containment lab in Hamburg, Germany, says virologist Stephan Günther of the Bernhard Nocht Institute for Tropical Medicine in Hamburg, which implements the lab project. Günther says that the European mobile lab is acting as custodian of the samples, which are still owned by the countries in which they were collected. The project has signed agreements with Sierra Leone and Guinea that guarantee access for researchers from those countries, he adds.

Public Health Canada says that it has not yet shipped samples out of West Africa but would not reveal where it is holding them, citing “biosafety and biosecurity concerns”.

The CDC says that it is keeping samples both in West Africa and the United States but would not state how many it holds. In December, it shipped 7,000 from Sierra Leone to the United States (see Nature http://doi.org/6jm; 2014). However, the agency has come under fire recently for major lapses in biosecurity (see Nature http://doi.org/6jn; 2015), and raised this among a number of potential hurdles to creating a biobank.

Guillen says that he is hopeful that these issues can be worked through. “We need better research tools,” he says. “Hopefully we can move quickly to get these tools in place.”