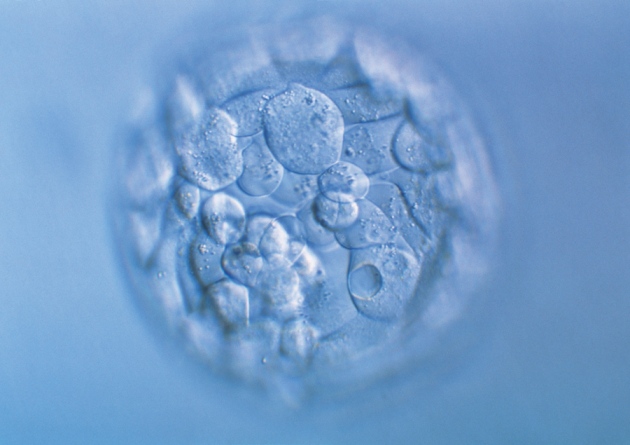 A human blastocyst, an early-stage embryo of the kind used in research, comprising 150 or so cells.

Three independent research teams have now used cloning technology to make human embryonic stem cells carrying the genomes of existing people. The first announcement, using genomes from fetal and infant cells, came last year1. The next two reports have emerged in the past month, detailing human embryonic stem cells that were custom made from cell samples derived from living adults, including a 75-year-old man2 and a 32-year-old woman with type 1 diabetes3.

This repeated cloning of embryos and generation of stem cells, now using cells collected from adults, increases the likelihood that human embryos will be produced to generate therapy for a specific individual. The creation of more human embryos for scientific experiments is certain. Regulatory structures must be in place to oversee it.

These accomplishments were made possible by numerous tweaks, and by mastery of difficult techniques and of the administrative work required to collect enough eggs from healthy young women. Each research team inserted nuclei taken from human skin cells into unfertilized eggs from which the original nuclei had been removed. These constructions grew in a dish into early-stage embryos — hollow balls of about 150 cells. Dozens of embryos and about ten stem-cell lines were derived across the three studies.

With reliable techniques now available, researchers will want to compare the therapeutic potential of cloned embryonic stem cells with stem cells made from the easier technique of reprogramming adult cells. Doing so could require the production of cloned embryos from people with a range of diseases. Experiments that depend on custom-made embryos could also be used to investigate complex human diseases, infertility and, perhaps eventually, to generate genetically matched replacement tissues for people who lose organs to disease or degeneration.

For some, this raises two dangerous spectres: cloned human babies, and a future in which human embryos are callously created and destroyed for various kinds of research. Both scenarios can be avoided. Current policies (and probable biological barriers) are sufficient to mitigate the first. The second can be headed off by adding a provision to existing oversight structures.

Earlier variants of the embryo-cloning technique, called somatic-cell nuclear transfer (SCNT), produced domestic animals including cows, dogs and, most famously, Dolly the sheep. Efforts in humans have focused on cloning embryos not for pregnancies (reproductive cloning) but for laboratory work (research cloning). It is important to keep these two purposes separate.

Human reproductive cloning is already preemptively illegal in more than 30 countries and in 13 US states. Even in US states where reproductive cloning is not banned, it would require regulatory oversight by the Food and Drug Administration (FDA). The frequently observed ill health of cloned mice, sheep and other animals make safety concerns alone sufficient for the FDA and similar agencies in other countries to block attempts to clone a human baby. This is the position of scientific guidelines issued by the International Society for Stem Cell Research, the US National Academy of Sciences and the 1997 National Bioethics Advisory Commission.

“Barriers to obtaining eggs will limit the production of embryos.”

Debate is raging, however, over a related procedure for reproduction: transferring maternal chromosomes from a faulty egg into a healthy egg from which the chromosomes have been removed, which is then fertilized with a partner's sperm4. In vitro research in human gametes and successful reproduction in macaques suggest that women carrying mitochondrial diseases could bear genetically related children in this way without passing on defective mitochondria.

Although produced with similar techniques to cloning, the resulting embryo would not be a clone. The radical manipulations of the donor egg and transferred chromosomes, however, might compromise the health of any resulting child5. Ongoing animal studies are unlikely to provide sufficient safety data for regulators to decide whether human trials should proceed. Human embryos created for research by nuclear transfer might aid preclinical assessment. In other words, embryos created for research could be used in work that helps women with defective eggs to have children.

Laws governing SCNT work in humans generally reflect the desire to stop human reproductive cloning while supporting valuable science. However, the ethics of creating and destroying human embryos for research are complex. Laboratory-produced human embryos have, at minimum, a symbolic value for most people and should not be used carelessly6. Whether the latest advances could lead to research that trivializes embryos is uncertain. Nevertheless, wise policy would allay social fears while maintaining public support for scientific research.

Some countries, notably Germany and Canada, have made it a criminal offence to create embryos for research by any means, including by in vitro fertilization (IVF), SCNT or from unfertilized eggs with original nuclei. Australia, Singapore and the United Kingdom allow the creation of research embryos by SCNT, but only under regulation by government agencies. The UK Human Fertilisation and Embryology Authority (HFEA) and Australia's Embryo Research Licensing Committee review and approve proposals to license the creation of embryos for specific scientific experiments. Although scientists complain about delays, these bodies have allowed research to proceed with public confidence, and facilitated crucial advances in assisted reproductive technologies.

Policies across the United States run the gamut. Polls conducted during the presidency of George W. Bush (which banned the use of federal funds for research on embryonic stem cells created after 9 August 2001) showed that most Americans approved of research on stem cells derived from surplus embryos in fertility clinics but objected to creating embryos specifically for research7. Now that President Barack Obama has lifted the funding restriction, today's policy mirrors this ambivalence: public funds may be used only on embryonic stem cells derived from donated surplus embryos originally made for reproduction.

In 1994, a panel of the US National Institutes of Health (NIH) drafted guidelines for the creation of research embryos but political pressures prevented them from going into effect. These stipulated that creating embryos for research requires, for instance, that: surplus IVF embryos would be unsuitable for meeting scientific goals; research goals would greatly benefit science and society; the minimum number of embryos would be created to answer the question; and their use would be limited to the shortest time necessary, at most within 14 consecutive days of development in vitro8. These are precisely the types of consideration that national-licensing bodies such as the HFEA take into account, but the United States currently has no such review mechanisms for proposals that seek to create research embryos.

Here, a legacy from the Bush era might help. In the absence of NIH funds (and concomitant ethical guidelines) the US National Academy of Sciences recommended that every organization performing research on embryonic stem cells establish a dedicated review committee and require scientists to submit relevant protocols for its approval before proceeding with experiments. Academic institutes and even for-profit companies voluntarily did so. These committees, which are still in place, seem well suited to assess the creation of research embryos.

Their duties, however, will need to be expanded. Currently, these committees are responsible for tracking provenance and research use of stem-cell lines derived from IVF embryos. In my view, the committees should be required to evaluate scientists' rationales in proposals to create embryos for research. It is possible that different institutions, like different countries, will come to different conclusions about which experiments should proceed, confusing the public or perhaps prompting productive debate.

This approach does have limitations. Stem-cell-research oversight committees might lack the expertise or remit to consider all situations in which embryos might be created, such as reproductive uses of heavily manipulated or cultivated gametes, as would be used for transferring maternal chromosomes from an unhealthy egg. So alternative approaches are also worth considering. Still, review mechanisms work best when they build on existing regulatory practices. Adapting structures already in place will address ethical issues adequately without hindering science unduly.

It is easy to see how the three most recent cloning studies broke scientific ground, but that assessment will become thornier as work progresses. Barriers to obtaining eggs will limit the production of embryos for less-than-cutting-edge research. But it is important to review specifically whether the questions that a custom-made embryo could help to answer justify its creation.