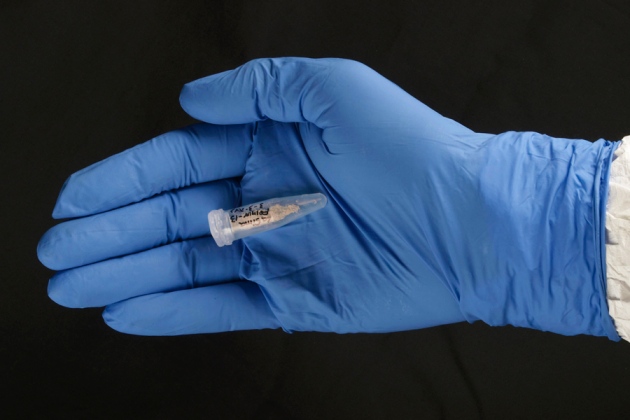 Matthias Meyer has just published the results of what may be the world’s most wasteful genome-sequencing project. In decoding just 0.1% of the genome of the oldest DNA ever recovered from an ancient human, the molecular biologist at the Max Planck Institute for Evolutionary Anthropology in Leipzig, Germany, threw out enough raw data to map the modern human genome dozens of times over.

But the excess was necessary, because the DNA in the 430,000-year-old bones was degraded and contaminated. Meyer’s feat of recovery has revealed that the remains, from a cavern in northern Spain, represent early Neanderthals — and has pushed back estimates of the time at which the ancient predecessors of humans must have split from those of Neanderthals (M. Meyer et al. Nature http://dx.doi.org/10.1038/nature17405; 2016).

“Starting such a thing is already very ambitious, and managing it is even more impressive,” says Ludovic Orlando, an ancient-DNA researcher at the Natural History Museum of Denmark in Copenhagen. “We are really reaching the limits of what is possible.”

The analysis addresses confusion over which species the remains belong to. A report published in 2013 sequenced a femur’s mitochondrial genome — which is made up of DNA from the cell’s energy-producing structures that is more abundant in cells than is nuclear DNA. It suggested that at least one individual identified from the remains was more closely related to a group called Denisovans — known from remains found thousands of kilometres away in Siberia — than it was to European Neanderthals (M. Meyer et al. Nature 505, 403–406; 2014).

“It’s wonderful news to have mitochondrial and nuclear DNA from something that is 430,000 years old. It’s like science fiction. It’s an amazing opportunity,” says Maria Martinón-Torres, a palaeoanthropologist at University College London.

The remains are known as the Sima hominins because they were found in Sima de los Huesos (Spanish for ‘pit of bones’), a 13-metre-deep shaft in Spain’s Atapuerca mountains. Few ancient sites are as important or intriguing as Sima, which holds the remains of at least 28 individuals, along with those of dozens of cave bears and other animals. The hominins might have plummeted to their death, but some researchers think they were deliberately buried there. 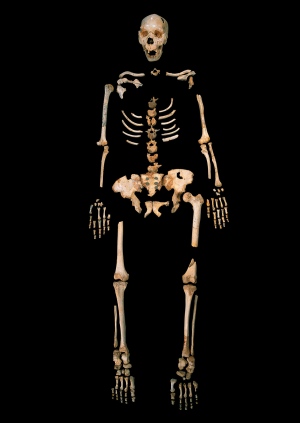 The skeleton of an early Neanderthal from Sima de los Huesos in Northern Spain.

The Sima hominin skulls have the beginnings of a prominent brow ridge, as well as other traits typical of Neanderthals. But other features, and uncertainties around their age — some studies put them at 600,000 years old, others closer to 400,000 — convinced many researchers that they might instead belong to an older species known as Homo heidelbergensis.

Confusion peaked when Meyer, his colleague Svante Pääbo and their team revealed the mitochondrial connection to the Denisovans. But they hoped that retrieving the skeletons’ nuclear DNA — which represents many more lines of ancestry than does mitochondrial DNA, which is inherited solely from the maternal line — would clear things up.

Meyer’s team managed to glean nuclear and mitochondrial DNA from five Sima samples, probably representing different individuals. A key factor in their success, says Meyer, was that since 2006, archaeologists had carefully refrigerated teeth and shoulder-blade tissue from the pit to preserve the ancient DNA — awaiting advanced molecular-analysis techniques.

The nuclear DNA, Meyer’s team reports in Nature on 14 March, shows that the Sima hominins are in fact early Neanderthals. And its age suggests that the early predecessors of humans diverged from those of Neanderthals between 550,000 and 765,000 years ago — too far back for the common ancestors of both to have been Homo heidelbergensis, as some had posited.

Researchers should now be looking for a population that lived around 700,000 to 900,000 years ago, says Martinón-Torres. She thinks that Homo antecessor, known from 900,000-year-old remains from Spain, is the strongest candidate for the common ancestor, if such specimens can be found in Africa or the Middle East.

The team’s latest mitochondrial sequences, meanwhile, again confirm the puzzling link between the Sima hominins and the Denisovans. Meyer suggests that the ancestors of the two groups carried mitochondrial DNA that is reflected in both — but which is not present in later Neanderthals. This elimination could have happened by chance, but Meyer now favours the hypothesis that an as yet unknown species from Africa migrated to Eurasia and bred with Neanderthals, replacing the mitochondrial DNA lineages. (Supporting this idea, stone-tool technologies spread from Africa to Eurasia around half a million years ago, and again 250,000 years ago).

It is hard to rule out these or other ideas without new data, says Meyer. The full or nearly full genome of a Sima hominin, or genetic data from other early Neanderthals, would be necessary.

“It’s fascinating and keeps us all on our toes trying to make sense of it all,” says Chris Stringer, a palaeoanthropologist at the Natural History Museum in London. Stringer says that the recovery of such old nuclear DNA gives him hope that researchers will be able to analyse ancient DNA that stretches even further back in time. “Instead of just being stuck with trying to resolve the last 100,000 years,” he says, “we can really start to put some dates from DNA further down the human tree.”