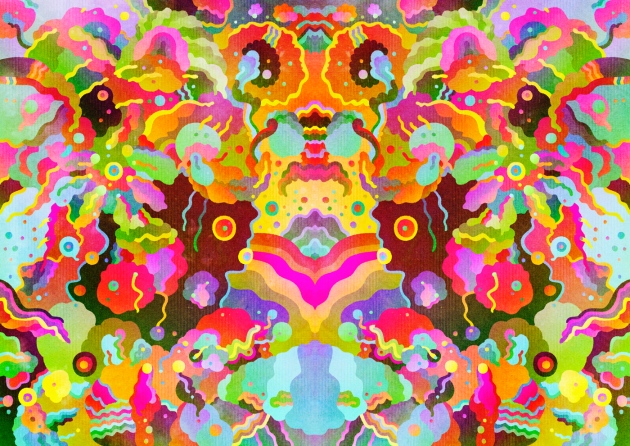 An image inspired by the reported experiences of psychedelic drug users. Anecdotal evidence of 'acid casualties' — users who develop chronic psychoses —is not supported by data from large populations, researchers say.

Data from population surveys in the United States challenge public fears that psychedelic drugs such as LSD can lead to psychosis and other mental-health conditions and to increased risk of suicide, two studies have found1, 2.

In the first study, clinical psychologists Pål-Ørjan Johansen of EmmaSofia, a non-profit advocacy group based in Oslo, and Teri Suzanne Krebs of the Norwegian University of Science and Technology in Trondheim, scoured data from the US National Survey on Drug Use and Health (NSDUH), an annual random sample of the general population, and analysed answers from more than 135,000 people who took part in surveys from 2008 to 2011.

Of those, 14% described themselves as having used at any point in their lives any of the three ‘classic’ psychedelics: LSD, psilocybin (the active ingredient in so-called magic mushrooms) and mescaline (found in the peyote and San Pedro cacti). The researchers found that individuals in this group were not at increased risk of developing 11 indicators of mental-health problems such as schizophrenia, psychosis, depression, anxiety disorders and suicide attempts. Their paper appears in the March issue of the Journal of Psychopharmacology1.

The findings are likely to raise eyebrows. Fears that psychedelics can lead to psychosis date to the 1960s, with widespread reports of “acid casualties” in the mainstream news. But Krebs says that because psychotic disorders are relatively prevalent, affecting about one in 50 people, correlations can often be mistaken for causations. “Psychedelics are psychologically intense, and many people will blame anything that happens for the rest of their lives on a psychedelic experience.”

The three substances Johansen and Krebs looked at all act through the brain’s serotonin 2A receptor. The authors did not include ketamine, PCP, MDMA, fly agaric mushrooms, DMT or other drugs that fall broadly into the category of hallucinogens, because they act on other receptors and have different modes of biochemical action. Ketamine and PCP, for example, act on the NMDA receptor and are both known to be addictive and to cause severe physical harms, such as damage to the bladder3.

“Absolutely, people can become addicted to drugs like ketamine or PCP, and the effects can be very destructive. We restricted our study to the ‘classic psychedelics’ to clarify the findings,” says Johansen.

“This study assures us that there were not widespread ‘acid casualties’ in the 1960s,” says Charles Grob, a paediatric psychiatrist at the University of California, Los Angeles. He has long has advocated the therapeutic use of psychedelics, such as administering psilocybin to treat anxiety in terminal-stage cancer4. But he has concerns about Krebs and Johansen’s overall conclusions, he says, because individual cases of adverse effects use can and do occur.

For example, people may develop hallucinogen persisting perception disorder (HPPD), a ‘trip’ that never seems to end, involving incessant distortions in the visual field, shimmering lights and coloured dots. “I’ve seen a number of people with these symptoms following a psychedelic experience, and it can be a very serious condition,” says Grob.

Krebs and Johansen, however, point to studies that have found symptoms of HPPD in people who have never used psychedelics5.

The second of the new two studies, also published in the Journal of Psychopharmacology2, looked at 190,000 NSDUH respondents from 2008 to 2012. It also found that the classic psychedelics were not associated with adverse mental-health outcomes. In addition, it found that people who had used LSD and psilocybin had lower lifetime rates of suicidal thoughts and attempts.

“We are not claiming that no individuals have ever been harmed by psychedelics,” says author Matthew Johnson, an associate professor in the Behavioral Pharmacology Research Unit at Johns Hopkins University in Baltimore, Maryland. “Anecdotes about acid casualties can be very powerful — but these instances are rare,” he says. At the population level, he says, the data suggest that the harms of psychedelics “have been overstated”.

An earlier version of this article stated that Johansen was affiliated with the Norwegian University of Science and Technology.