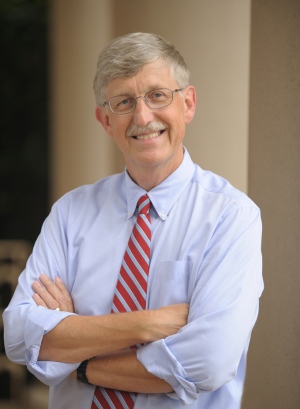 Francis Collins, who heads the US National Institutes of Health, reached an agreement with the Lacks family about publication of the HeLa cell genome.

This week a policy allowing controlled access to the HeLa cell genome goes into effect. The policy is the result of three meetings between Francis Collins, the director of the US National Institutes of Health (NIH), and relatives of Henrietta Lacks, the woman whose cervical tumour gave rise to the HeLa cell line, between April and July.

German researchers had released the HeLa genome1, without the family's knowledge, in March, and Nature was about to publish another HeLa sequencing project, led by a team at the University of Washington in Seattle. Both publications were suspended temporarily owing to concerns about the privacy of the Lacks family, who were profiled in the widely read The Immortal Life of Henrietta Lacks by Rebecca Skloot. The Nature paper is published this week2.

In an exclusive, one-hour interview on the NIH campus in Bethesda, Maryland, Collins told Nature about the meetings with the Lacks family and how he brokered a deal to release HeLa genomic data while respecting the wishes of the family.

What was your response to the publication of the HeLa genome?

It took a few days for me to become aware it had been put out there. As a sequence of a cancer cell, it adds to what is a hugely, rapidly growing database of information. At the same time, HeLa cells, because of their unprecedented and ongoing utility in the biomedical research community, take a special place. My lab is growing HeLa cells today. We’re using them for all kinds of gene-expression experiments, as is almost every molecular biology lab you know.

Do you think the scientists who conducted this work were insensitive towards the Lacks family?

Once this was raised as something that might make the Lacks family uncomfortable, I think both groups responded. The German group was in accord that the sequence should be taken down. The Washington group was comfortable delaying publication. I wouldn’t call that insensitive.

What did you tell the Lacks family?

They’ve been intensely familiar with HeLa cell story — they’re part of that story. But ‘genome’ was not necessarily a familiar word. The second meeting I think I spent about half the time at the white board drawing diagrams of DNA and explaining what happens when cancer develops and how there are mutations that appear to drive that cell to grow when it shouldn’t, and walking them through the genomics of cancer, which was new information to them, as it would be to most people. We also told them about some of the exciting findings that came out, particularly the explanation for how HeLa cells grew so prodigiously.

What did the family members tell you?

Initially, they did want us to understand how the experience they had gone through with the whole HeLa cell story had been unsettling. I got a clear sense that they were very much in support of the idea that HeLa cells had done good things, that this was something their family had contributed and that medicine was advanced because of this.

There were questions about what the sequence could tell them about Henrietta and about themselves.  We told them that we could connect them with genetic counsellors, that we could connect them to medical-genetics experts. The family had been unwilling participants in research in the past, and [we told them] that if they wanted to, they could be knowing, voluntary participants in research. We have a really cool whole-exome sequencing programme here on campus called ClinSeq and we said they could be participants in that.

Did you try to push them to support the re-release of the HeLa genome?

We tried to walk through what the options might be, and to listen. One option was to go ahead and deposit [the genome] in a completely open-access model, which is what happened first. The second option was to establish a data-access committee that would review requests for access and decide whether they fit the criteria for sequence access , namely medical research. The third option, and we put this on the table, was that the sequence would not be released. Obviously, that would be pretty drastic.

The problem with the open-access model for them was that if in the future they would like [something about the genome] not to be known, they would have no control. The problem with no access at all — they understood it would potentially slow down some aspects of medical research, but they also understood that would be pretty hard to enforce, given that the cells are all over the place. There are lots and lots of snippets of HeLa sequence that have been out there now for years as part of other projects. Our friends at the National Center for Biotechnology Information tallied it up, and there are about 400 genomes’ worth of total HeLa sequence.

Will limiting access to the HeLa genome slow research?

I think those who are highly motivated and really have a plan for using the sequence will not see this as a sufficient reason not to go through those steps. What we’re trading this off against is the really important principle of respect for persons, in this case for a family that has been very publicly identified, and that from their view — and their view is the thing that matters most here — could be compromised by completely open access to this information.

Will this agreement serve as a precedent?

I think this is a unique situation, to have a cell line that is used this widely — more than any other in the world. But even more than that because although the donor of the cell line is long since gone, the relatives are so publicly known because of a best-selling book that so many people have read. Their lives have been disclosed already; therefore, I think we owe them. I think it’s both highly justified but highly unique.

Why not ban all research on tissues from unconsenting donors?

The goal of medical research is public benefit, to try to make discoveries that are going to help people. And although the use of archived specimens is limiting in certain ways, [those tissues still offer] an incredible trove of material. If you shut off access to them, you would undoubtedly slow research right now, in terms of diseases such as cancer. The trade-off would not justify that extreme position.

Will the discussions with the Lacks family catalyse policy changes?

The fact that we’re having this conversation and that there is now this disclosure of the outcome will generate a lot of interest. Ultimately, going forward, I’m very much of the mind that the most appropriate way to show respect for persons is to ask. Ask people, “Are you comfortable having this specimen used for future genomic research, for a broad range of biomedical applications?” And if they say no — no means no.

What will you tell the Lacks family the next time you see them?

I look forward to that opportunity because I would like to say something to them to denote the really powerful experience that we’ve all been through together. This is pretty unique. This has wrapped in it science, scientific history, ethical concerns, the bringing together of people of very different cultures, a family with all the complications that families have. But what a remarkable family. I really want the chance to express to the family how impressed I have been with their ability to take on a situation of this sort. They could have decided to say no and railed against the whole thing, and I think they deserve a huge amount of credit for having put that kind of effort into a situation they weren’t expecting either.