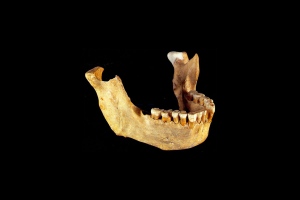 New dating of animal bones associated with this jawbone from southern Spain and other remains puts into question whether Neanderthals were alive as recently as 30,000 years ago.

Neanderthals may have vanished from southern Spain thousands of years earlier than previously thought, a carbon-dating study argues this week in Proceedings of the National Academy of Sciences1.

The archaic humans known as Homo neanderthalensis lived throughout Europe more than 50,000 years ago in the Middle Palaeolithic Age, before going extinct around the time when modern humans reached Europe from Africa. Many archaeologists propose that the last Neanderthals lived in the Iberian Peninsula: for instance, Gorham’s Cave in Gibraltar contains Neanderthal artifacts, and charcoal from fires there has been carbon-dated to less than 30,000 years ago2.

In recent years, however, archaeologists studying the extinction of Neanderthals and the arrival of modern humans in Europe have realized that many of the samples used to obtain such dates are contaminated with modern carbon, resulting in dates that are thousands of years too young.

A team led by Tom Higham, an archaeologist at the University of Oxford, UK, is re-dating dozens of human and Neanderthal sites across Europe using methods that remove contamination from the protein collagen in bones. The project has discovered that humans reached Britain more than 40,000 years ago — some 10,000 years earlier than was thought — and has challenged evidence that Neanderthals created objects such as shell beads that suggest a capacity for symbolic thinking.

In the latest study1, Higham and his former graduate student Rachel Wood, now at the Australian National University in Canberra, tried to date remains from 11 sites on the Iberian Peninsula using their decontamination methods. Previous efforts put the remains as young as 36,000 years old.

However, Wood and Higham found that just two of the sites — Jarama, outside Madrid, and Cueva del Boquete de Zafarraya, near the southern tip of Spain — contained bones with enough carbon to be dated. Their work suggests that these remains are more than 45,000 years old, with some older than 50,000 years, the practical limit of carbon dating. Wood says that the team’s study calls into question evidence that the last populations of Neanderthals found refuge in the Iberian Peninsula.

Not so fast, say other archaeologists. “It’s difficult to pick two places in Iberia and say that’s what happened everywhere,” says Clive Finlayson, an archaeologist at the Gibraltar Museum, whose team excavated Gorham’s Cave. The two sites that Wood and Higham studied are at high altitude, he says, and would have been inhospitable in a Europe that was entering an ice age. However, bone collagen doesn’t preserve well at the warmer sites in which Finlayson thinks the last Neanderthals lived, “so we are at bit of an impasse”, he says.

Dating methods that don’t rely on carbon could provide more certainty, says Finlayson, and he is applying such techniques to sites in Gibraltar. Wood says that new archaeological sites are needed to get a clearer picture of the Iberian Peninsula’s history. “The problem," she says, "is that there’s not a huge amount of evidence for anything in the Palaeolithic.”