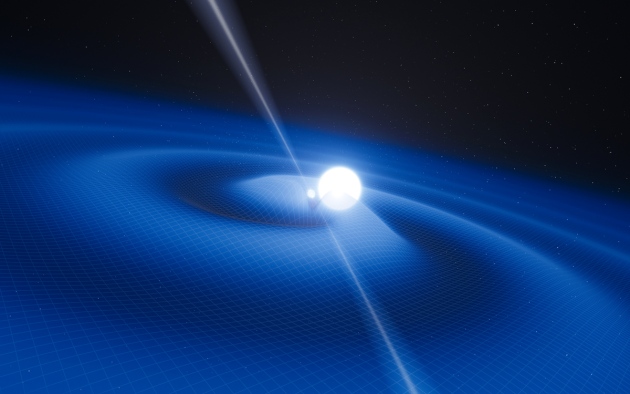 Two stars circle each other in an orbit that gets progressively tight as predicted by general relativity — according to which the stars lose energy by emanating gravitational waves (blue spirals in this artist's impression).

Albert Einstein’s theory of gravity has passed its most stringent astrophysical test yet, correctly predicting how a closely orbiting pair of dense stars are spiralling towards each other.

The findings rule out a subclass of competing theories of gravity, John Antoniadis of the Max Planck Institute for Radioastronomy in Bonn, Germany, and his colleagues report today in Science1.

“This system provides a rare opportunity to constrain many non-Einstein models of gravity,” comments Alan Kostelecký, a theoretical physicist at Indiana University in Bloomington, who was not involved in the study.

The stellar duo comprises a neutron star — the ultradense cinder of a supernova explosion — and the compact remnant of a Sun-like star, known as a white dwarf.

Team member Ryan Lynch, of McGill University in Montreal, Canada, discovered the neutron star using the Robert C. Byrd Green Bank Telescope in West Virginia. The star is classified as a pulsar because as it rapidly spins it emits radio waves that sweep across the sky with clockwork regularity — about 25 times per second.

Lynch and other collaborators then identified an ageing white dwarf at the same location as the pulsar, and by observing it with the European Southern Observatory’s Very Large Telescope in Paranal, Chile, they calculated the masses of both stars, which were crucial for testing the gravity theory. The pulsar, which tips the scales at twice the Sun’s mass, is the most massive neutron star ever measured.

General relativity predicts that celestial objects orbiting each other produce ripples in the fabric of space-time, known as gravitational waves. The effect is too small to have detectable consequence for objects that are not extremely massive and in tight orbits. But because these two stars are so massive and separated by a relatively small distance (only twice as far as the Moon is from the Earth), they are expected to irradiate a substantial amount of energy as gravitational waves.

Gravitational waves have yet to be detected directly. But the energy carried away by the waves would cause the orbit of two close stellar partners to shrink by a specific amount, according to general relativity. That effect, first documented in another pair of stars — a pulsar and a neutron star that are in a more widely separated orbit and less extreme in their heft — garnered the 1993 Nobel Prize in Physics.

For the recently discovered pair, general relativity predicts that the 2.46-hour orbital period of the two stars should decrease by about eight-millionths of a second every year. That tiny decrease is just what Antoniadis and his collaborators have found, using the three largest radio dishes on Earth to measure variations in the arrival time of the pulsar’s radio waves.

Physicists expect general relativity to break down at some level, because the theory is inconsistent with quantum mechanics, notes Lynch. “But the results from our study show that we'll have to look even harder to find just when that happens,” he adds.

The finding rules out a group of alternative theories of gravity, according to which the orbit of the stellar pair should shrink many times faster than general relativity predicts, says Antoniadis.

Physicist Clifford Will of the University of Florida in Gainesville says that the team has narrowed the number of possible alternatives to general relativity. However, he thinks that Antoniadis and his colleagues “overstate somewhat the implications of the results for testing general relativity”, noting that there are still many competing theories that would agree with the new data.