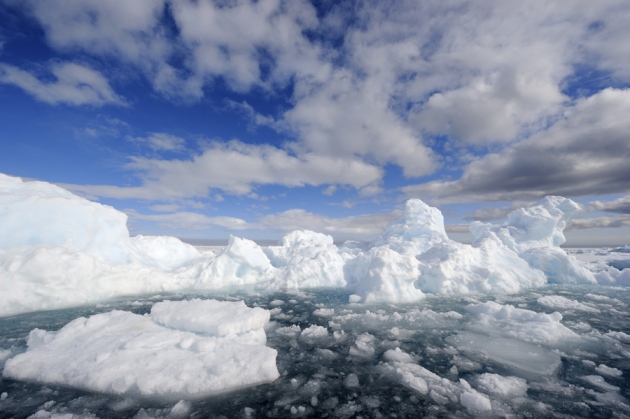 Larger areas of open ocean and warming surface waters will alter evaporation, cloudiness, precipitation and storm patterns across the Arctic and beyond.

Before indifferent satellite eyes, the top of the world is undergoing a transformation. The Arctic ice pack, a primary indicator of climate change, has shrunk in recent weeks to an extent that no computer model and few scientists had thought possible.

After five years that all saw less ice than previously documented in the 34-year satellite record, this year’s record loss has scientists questioning their models. They are also striving to understand the complex cascade of effects — from shifting weather patterns to displaced marine species — that the accelerating retreat could trigger.

The massive melt has occurred in relatively normal weather conditions, with only one strong summer storm to hasten the break-up of the pack ice. Mark Serreze, director of the NSIDC, says that much of the Arctic pack is now thin first-year ice — frozen only last winter — which requires much less energy to break apart and disperse than multi-year ice. “We have entered a new regime,” he says. “The sea ice is in such poor health in spring that large parts of it can’t survive the summer melt season, even without boosts from extreme weather.” 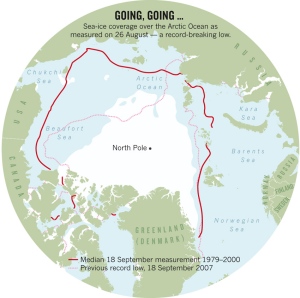 Computer models that simulate how the ice will respond to a warming climate project that the Arctic will be seasonally ‘ice free’ (definitions of this vary) some time between 2040 and the end of the century. But the observed downward trend in sea-ice cover suggests that summer sea ice could disappear completely as early as 2030, something that none of the models used for the next report by the Intergovernmental Panel on Climate Change comes close to forecasting1.

“There’s a tremendous spread between observations and model projections,” says Serreze. “It might be that natural variability is larger than assumed, or perhaps models don’t get the change in ice thickness right.” Uncertainty also remains over the strength of various natural ‘feedbacks’. For example, an exposed ocean is darker than an ice-covered surface and so absorbs more solar heat, causing yet more warming and melting.

A lack of fine detail about circulation patterns in the Arctic Ocean could also be throwing off the models. For example, a survey carried out in 2008 revealed 20 formerly unobserved eddies, each some 15 to 20 kilometres in diameter, in waters north of Canada. “Whether these are new features, and what role they might play for ocean-mixing processes, we don’t know yet,” says Yves Gratton, an oceanographer and Arctic researcher at the National Institute of Scientific Research in Montreal, Canada.

Ice loss could also accelerate if the ice pack’s underlying waters warm up. Unlike in most of the world’s oceans, the coldest water in the Arctic, at −1 °C to −2 °C, is at the surface; below a depth of 200–300 metres, saltier and warmer water of about 1 °C flows in from the Atlantic. The cold surface layer — called the halocline — isolates the sea ice from the warmer water below.

But the halocline is vulnerable to warming from above, says Henning Bauch, a marine geologist at the GEOMAR research centre in Kiel, Germany. A thinning halocline — something that has not yet been observed — would not only jeopardize the sea ice but could also melt the carbon-rich permafrost beneath shallow coastal waters2, releasing greenhouse gases into the atmosphere.

Meanwhile, Arctic biology is already changing, as the retreat and thinning of sea ice allows more sunlight to penetrate the upper ocean and deprives certain species of habitat, says Jørgen Berge, a marine biologist at the University of Tromsø in Norway. For example, the dominant Arctic zooplankton — the copepods Calanus hyperboreus and C. glacialis — are being replaced by Atlantic C. finmarchicus. Meanwhile, Arctic cod (Arctogadus glacialis) is increasingly being out-competed by its larger Atlantic cousin Gadus morhua3.

Other species are showing unexpected resilience. In January, a research cruise into the pack ice north of Svalbard, Norway, found evidence that Apherusa glacialis — amphipods, or small crustaceans, that feed on algae growing beneath the ice and are the main food source for many Arctic sea birds — are less dependent on extensive sea ice than previously thought. Just as some coastal organisms drift with the tide to retain their positions in river estuaries, these amphipods can sink to depths at which pole-ward ocean currents sweep them farther north, where they can find and colonize surviving sea ice4.

“This looks like an adaptive trait that allows key Arctic-ice fauna to persist in changing sea-ice environments,” says Berge, who led the study. He points out that the Arctic Ocean has been ice-free during the summer several times during the past 2.5 million years, and that as recently as 8,000–6,500 years ago, during a period known as the Holocene Thermal Maximum, much more of the Arctic was ice-free than it is today5 — with no mass-extinction events known to have occurred.

Farther afield, this year’s record sea-ice melt might foreshadow a harsh winter in parts of Europe and North America. Recent research, although preliminary, suggests a connection between late-summer Arctic sea-ice extent and the location of areas of high and low atmospheric pressure over the northern Atlantic. The highs and lows can remain relatively fixed for weeks, shaping storm tracks and seasonal weather patterns such as extended cold surges6.

Ralf Jaiser, a climate scientist at the Alfred Wegener Institute for Polar and Marine Research in Potsdam, Germany, found a significant correlation in 1989–2011 meteorological data between late-summer Arctic sea-ice extent and atmospheric-pressure anomalies that favour extreme weather such as prolonged cold snaps in winter7. He reasons that in autumn, the open Arctic Ocean sheds heat to the high-latitude atmosphere. The warming tends to reduce the large-scale atmospheric-pressure gradient and weakens the dominant westerly winds in the Northern Hemisphere. Those winds normally sweep warm, moist Atlantic air to western Europe; their weakening leaves the region more prone to persistent cold.

“The impacts will become more apparent in autumn, once the freeze-up is under way and we see how circulation patterns have influenced the geographical distribution of sea ice,” says Judith Curry, a climate researcher at the Georgia Institute of Technology in Atlanta. But, she adds, “We can probably expect somewhere in the mid/high latitudes of the Northern Hemisphere to have a snowy and cold winter.”