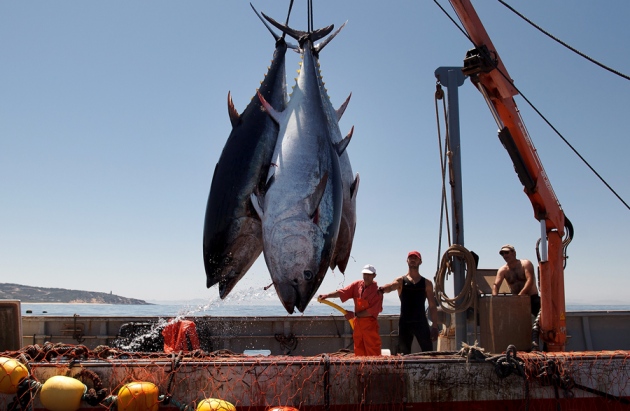 Bluefin tuna accumulate mercury by virtue of their position atop the ocean food web.

Mercury levels in the upper ocean have tripled since the beginning of the Industrial Revolution, and human activities are to blame, researchers report today in Nature1.

Although several computer models have estimated the amount of marine mercury, the new analysis provides the first global measurements. It fills in a critical piece of the global environmental picture, tracking not just the amount of mercury in the world's oceans, but where it came from and at what depths it is found.

“Nobody's attempted to do a more comprehensive overview of all the oceans and get an estimate of total mercury in the surface and some deeper waters before,” says David Streets, an energy and environment policy scientist at Argonne National Laboratory in Lemont, Illinois, who was not involved in the study.

Researchers collected thousands of water samples during eight research cruises to the North and South Atlantic and Pacific oceans between 2006 and 2011. To determine how mercury levels had changed over time, they compared samples of seawater from depths down to 5 kilometres with water closer to the surface, which had been more recently exposed to mercury pollution from land and air.

Their analysis reveals that human activities — mostly the burning of fossil fuels, but also mining — had boosted the mercury levels in the upper 100 metres of the ocean by a factor of 3.4 since the beginning of the Industrial Revolution. The total amount of anthropogenic mercury in the world's seas now stands at 290 million moles, with the highest levels in the Arctic and North Atlantic oceans.

“They were really able to look back in time with their study,” says Noelle Eckley Selin, an atmospheric chemist at the Massachusetts Institute of Technology in Cambridge, who was not involved in the study.

The researchers say that ocean circulation patterns have helped to blunt the effects of some of the rise in marine mercury. Circulation patterns that drive very cold, salty and dense water to sink into the deep ocean carry large amounts of mercury from shallower depths where life abounds. That provides some protection to marine life, as mercury's toxic effects magnify with every step up the food chain. For example, the mercury levels in a top predator such as tuna are 10 million times higher than those in the surrounding seawater.

But study co-author Carl Lamborg, a marine geochemist at Woods Hole Oceanographic Institution in Massachusetts, says that the deep water's ability to sequester mercury may soon be exhausted. Humans are on track to emit as much mercury in the next 50 years as they did in the last 150 years, he notes.

“You're starting to overwhelm the ability of deep water formation to hide some of that mercury from us, with the net result that more and more of our emissions will be found in progressively shallower water,” Lamborg adds. That increases the odds that mercury levels in key food species will rise, increasing humans' exposure.

Between 5–10% of US women of childbearing age already have blood mercury levels that that increase the risk of neurodevelopmental problems in their children2, and an estimated 1.5 million–2 million children are born in the European Union each year with mercury exposure levels associated with IQ deficits3. Wildlife and marine life is not spared either. Studies have found that mercury levels compromise the reproductive health and fertility of some fish and birds4, 5.

David Krabbenhoft, a geochemist with the US Geological Survey in Middleton, Wisconsin, says that the new study suggests that efforts to reduce mercury pollution could be effective, because oceans are not uniformly contaminated.

“Work like this strongly suggests that generational changes have been seen in the oceans' mercury levels — and if that's the case we would expect them to undergo responses linked to, hopefully, reduced mercury outputs from mankind moving forward,” he says.

Lamborg agrees. “The new data suggest that the problem is actually a bit more tractable,” he says. “It's a cause for optimism and should make us excited to do something about it because we may actually have an impact.”