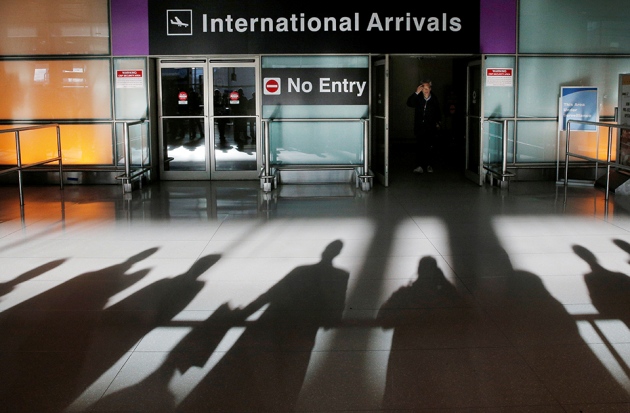 Many foreign-born scientists with US visas are reluctant to leave the country with immigration rules in flux.

Hani Goodarzi is sticking close to home these days. The cancer biologist at the University of California, San Francisco, cancelled a talk at the University of Calgary in late January and has put international travel on hold indefinitely. That’s because Goodarzi, an Iranian citizen who holds a US green card, is afraid that if he leaves the United States he might not be let back in.

He is not alone. Many foreign-born scientists say they are reconsidering plans to work or study in the United States, even though federal courts have indefinitely blocked US President Donald Trump’s travel ban. The policy, which Trump signed on 27 January, sought to deny entry to citizens of seven Muslim-majority nations for 90 days — including those with valid US visas.

Some researchers worry that the Trump administration will find a way to reinstate the policy, and perhaps even expand its reach. The government is reportedly preparing a reworked ban that would exclude current visa-holders, and Trump has also made brief mention of instituting a “merit-based” immigration system. The lingering uncertainty over US immigration rules is prompting some scientists to curtail crucial research trips and may dissuade other researchers, students and entrepreneurs from considering the US as a destination.

“There is this spread of psychology of fear,” says Mustafa al’Absi, a behavioural scientist at the University of Minnesota in Duluth. “This is where the burden is: what’s going on in the air more than the facts.”

The Trump ban affected citizens of Iran, Iraq, Libya, Somalia, Sudan, Syria and Yemen — including those who had already secured permission to visit or live in the United States. In the first days after the policy took effect, numerous reports surfaced of students and faculty from US universities who were trapped overseas or detained in airports.

Even though the ban has been blocked pending legal challenges, many institutions are still playing it safe. “All foreign nationals should carefully assess whether it is worth the risk to travel outside the country,” officials from the international office of Harvard University in Cambridge, Massachusetts, said in a 28 January letter to students and faculty — advice that is still in place for people from the seven countries. Researchers from other universities told Nature that they had received similar guidance.

Goodarzi says that he won’t leave the country unless it is an emergency, even though the White House moved to exempt green-card holders from the ban before the courts intervened. “I don’t think I can risk it at this time,” he says. That will prevent him from attending international meetings that could help to establish his scientific reputation as he builds a new lab.

Similarly, al’Absi and his colleagues at the University of Minnesota have ended a collaboration with researchers in Yemen to study the mental-health effects of khat, a recreational drug commonly taken in parts of Africa and the Middle East. The US group had scaled back the project a few years ago, in response to political upheaval in Yemen, but the prospect of working there at all seems impossible now given the direction that US immigration policy has taken, al’Absi says.

An Iranian–American astronomer, who did not want to be named because he has international travel coming up, says that the vetting process to enter the US is already very strict. He went through multiple interviews and fingerprinting to get his green card and later, his US citizenship. "It's not like giving out candies," he says.

It’s not clear whether the current uncertainty over immigration will dissuade foreign students from enrolling in US universities. More than 216,000 international students used temporary visas to enrol in science or engineering graduate programmes at US institutions in 2015, according to the US National Science Foundation. About 35,000 were working as postdocs in those fields.

“The worry we have is a snowball chilling effect,” says Benjamin Corb, director of public affairs at the American Society for Biochemistry and Molecular Biology in Rockville, Maryland. Prospective students from places that were not included in Trump’s ban may still wonder if their country could be affected in the future, and avoid the United States, he adds.

New York University, which has more international students than any other US institution, has not seen a decrease in interest from foreigners, says Thomas Sirinides, associate director of international student services. But applications to graduate programmes are not due until August, and the situation could change by then, he says. “If [international students] don’t feel confident they can finish a degree, they don’t want to come here to start a degree,” Sirinides adds.

In Malaysia, a Muslim-majority country that was not included in the Trump ban, “there’s confusion mixed with a little worry,” says James Coffman, executive director of the Malaysian–American Commission on Educational Exchange in Kuala Lumpur. The political climate in the United States is one reason that Coffman expects fewer Malaysians to apply to American universities this year.

Half a world away, in California’s Silicon Valley, investors and entrepreneurs are trying to understand how Trump’s immigration policies will affect the thriving start-up scene — which draws heavily on foreign science and engineering talent. “If it’s not friendly to stay here after you build your start-up, then why bother coming?” says Arvind Gupta, founder of IndieBio, a biotech accelerator programme in San Francisco, California.

Investors could also be put off if obtaining visas for start-up founders becomes harder or more expensive, he adds. Such fears have prompted Gupta to consider opening IndieBio’s first office outside the United States.

Some science groups are trying to come up with their own creative solutions to immigration problems. When the American Physical Society’s international-affairs committee meets in May, its members will discuss how the society can blunt the effects of the travel ban.

Potential actions could include redoubling efforts to help foreign researchers obtain US visas, or setting up virtual mentorships and collaborations for young scientists outside the country, says Maria Spiropulu, a physicist at California Institute of Technology in Pasadena and a member of the committee.

Still, Spiropulu is optimistic about the future. “We will remember this as a turbulent time,” she says. “I cannot believe that this world will persist.”