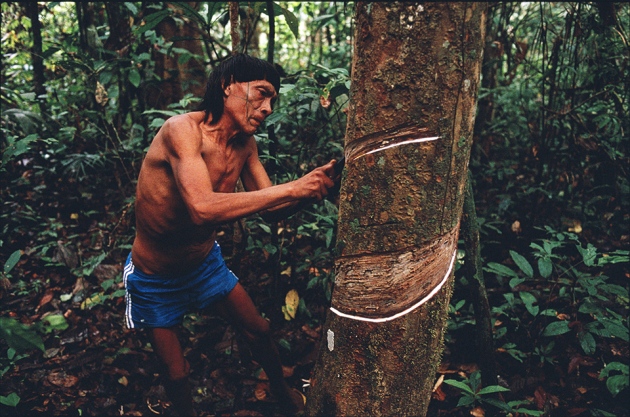 Ibalaba (shown extracting latex from a rubber tree), a man from the Amazonian Surui tribe, whom researchers have found bear genetic traces of a long-lost migration to the Americas thousands of years ago.

A mysterious group of humans crossed the Bering land bridge from Siberia into the Americas thousands of years ago, genetic analyses reveal. Modern-day signatures of this ‘ghost population’ survive in people who live deep in the Brazilian Amazon, but the two research teams who have made the discovery have different ideas about when and how these migrants reached the Americas1, 2.

"This is an unexpected finding," says Jennifer Raff, an anthropological geneticist at the University of Texas at Austin who was not involved in either study. "It’s honestly one of the most exciting results we’ve seen in a while."

North and South America were the last continents that humans settled. Previous studies of DNA from modern and ancient Native Americans suggest that the trek was made at least 15,000 years ago (although the timing is not clear-cut) by a single group dubbed the ‘First Americans’, who crossed the Bering land bridge linking Asia and North America.

“The simplest hypothesis would be that a single population penetrated the ice sheets and gave rise to most of the Americans,” says David Reich, a population geneticist at Harvard Medical School in Boston, Massachusetts. In 2012, his team found evidence for a single founding migration in the genomes from members of 52 Native American groups3.

So Reich was flabbergasted when a colleague called Pontus Skoglund mentioned during a conference last year that he had found signs of a second ancient migration to the Americas lurking in the DNA of contemporary Native Amazonians. Reich wasted no time in verifying the discovery. “During the session afterward, he passed his laptop over the crowd, and he had corroborated the results,” says Skoglund, who is now a researcher in Reich’s lab.

Skoglund’s discovery — which is published online on 21 July in Nature2 — was that members of two Amazonian groups, the Suruí and the Karitiana, are more closely related to Papua New Guineans and Aboriginal Australians than other Native Americans are to these Australasian  groups. The team confirmed the finding with several statistical methods used to untangle genetic ancestry, as well as additional genomes from Amazonians and Papuans. “We spent a lot of time being sceptical and incredulous about the finding and trying to make it go away, but it just got stronger,” says Reich.

Their explanation is that distant ancestors of Australasians also crossed the Bering land bridge, only to be replaced by the First Americans in most of North and South America. Other genetic evidence suggests that modern-day Australasians descend from humans who once lived more widely across Asia. “We think this is an ancestry that no longer exists in Asia, which crossed Beringia at some point, but has been overwritten by later events,” Reich says. The team calls this ghost population “Population Y”, after the word for ancestor, Ypykuéra, in the languages spoken by the Suruí and Karitiana. They contend that Population Y reached the Americas either before or around the same time as the First Americans, more than 15,000 years ago.

Skoglund was not the only scientist to uncover an unexpected connection between Americans and Australasians. As part of a study tracing the timing of humans’ migration across the Bering land bridge, Eske Willerslev, an evolutionary geneticist at the Natural History Museum of Denmark in Copenhagen, and his colleagues also noticed the link. But they contend that Australasian DNA reached the Americas less than 9,000 years ago. They discovered traces of Australasian ancestry in contemporary Aleutian islanders living off the coast of Alaska and propose that ancient Aleutians introduced the DNA into other Native American groups after the islands were first settled. Their study is published in Science1.

“Our interpretation might differ as to how this gets in, but the signal is obvious in both papers,” says Maanasa Raghavan, an evolutionary geneticist who is part of the Copenhagen team. Both teams dismiss the possibility that the ancestry was carried more recently by trans-Pacific mariners, she notes.

Lars Fehren-Schmitz, a biological anthropologist at the University of California, Santa Cruz, who is collaborating with Reich on a separate project to sequence DNA from ancient South Americans, questions whether the hypothesis of a more recent migration can explain the presence of Australasian DNA in the Amazon. “This scenario makes no sense to me. Why should they travel all the way from the far north to the Amazon without leaving any trace in the Americas?” he says. Raghavan says that interbreeding between neighbouring populations could have carried the Australasian DNA from the Aleutians to the Amazon, even if no individuals made the trek.

Raff, too, favours Reich and Skoglund’s interpretation. She thinks that the humans who colonized America from Siberia were more diverse than was once thought, with ‘Population Y’ isolated enough from the ‘First Americans’ to leave distinct genetic signatures.

DNA gleaned from ancient skeletons in the Americas may settle the debate. “They’re going to need to sample more ancient genomes from the Amazon. Good luck with that,” says Raff.

“The Amazon is quite possibly the worst place imaginable for DNA preservation,” with its humid climate, says Skoglund. But further sampling should be possible in other parts of the Americas and in Siberia, where Population Y presumably once lived.

“We’ve got very different models. The rubber will meet the road when we get more ancient genomes,” says David Meltzer, an archaeologist at Southern Methodist University in Dallas, Texas, who is part of the Copenhagen team.“I think this is actually pretty awesome.”