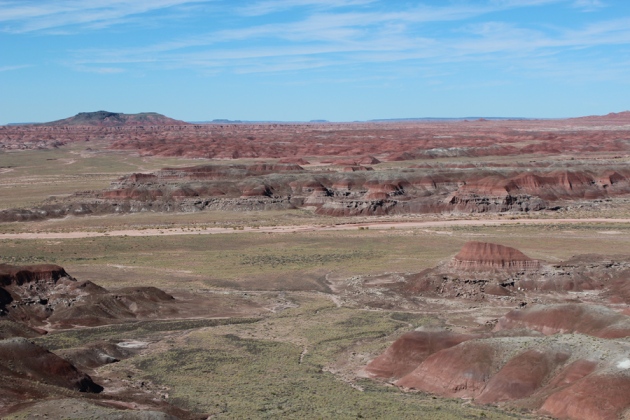 The red rocks of Chinde Point in the Petrified Forest National Park may soon provide fresh insight into events more than 200 million years ago.

Tourists flock to Petrified Forest National Park in Arizona to marvel at great glittering logs of petrified wood. But geologists hope to flock there this month in search of something less visible and more scientifically significant: a core obtained by drilling half a kilometre into rock more than 200 million years old.

Drillers will spend several weeks boring through layers of rock that house the fossils of tiny early dinosaurs and giant crocodile-like phytosaurs, as well as the leaves and pollen of an entire fossilized ecosystem. The goal of the US$970,000 drilling project is to stitch together a complete picture of most of the middle and late Triassic period, a turbulent interval that saw both a mass-extinction event and the emergence of dinosaurs. Geoscientists hope to use the decay of radioactive uranium in layers of volcanic ash in the core to precisely date events between about 205 million and 235 million years ago, just before the supercontinent Pangaea began to break apart.

“It’s a unique opportunity to put together a coherent time framework for a critical part of the Triassic,” says John Geissman, a geologist at the University of Texas at Dallas and one of the project’s leaders. “Sure, we have other continental Triassic records, but the Petrified Forest area is pretty darn good when it comes to details.”

The Petrified Forest effort has been years in the making. It is a follow-up to a project in which a Triassic core was drilled from New Jersey’s Newark sediment basin between 1990 and 1993 (ref. 1). That project aimed to tease out changes in the amount of sediment that was deposited as Earth went through cyclical shifts in the shape of its orbital path around the Sun. “If we can show that the Newark timescale is correct, we can empirically calibrate the Solar System’s behaviour,” says Paul Olsen, a geologist at the Lamont–Doherty Earth Observatory in Palisades, New York, and a member of the project team. “That’s probably the most exciting aspect for me.”

The effort, funded by the US National Science Foundation and the International Continental Scientific Drilling Program, might also help to resolve a simmering dispute. Comparisons of the Newark data with data from Triassic rocks in the Mediterranean have led some researchers to suggest radically revising the period’s history. This reworking would lead to one subdivision — the Norian stage — taking up nearly half of the entire Triassic period, drastically changing dates of key evolutionary events, including the emergence of certain dinosaurs. 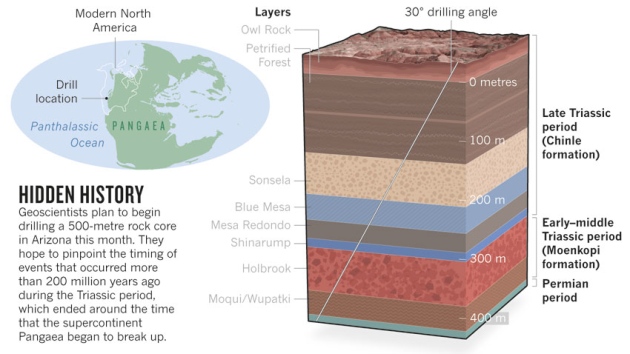 The idea of a ‘long Norian’ remains fiercely controversial2, and the Petrified Forest core would need to capture a sufficient record to settle the debate. But the rocks have plenty of chronological gaps, owing to weathering or abrupt geological events. Because of surface erosion, for example, the core will not capture the very end of the Triassic around 200 million years ago, when a mass extinction swept across the planet, killing many dinosaurian relatives. The core will instead start in rocks dating to around 205 million years ago, in layers known as the Chinle formation (see ‘Hidden history’). It will travel, with several breaks in time, through the Moenkopi formation and stop in rocks about 235 million years old. The record then skips tens of millions of years into rocks from the Permian period that preceded the Triassic.

“We know parts will be missing,” says Geissman. But getting a nearly complete record for much of the Triassic, in such well-studied rock layers, is bound to offer a trove of information.

Geologists have explored the Petrified Forest area since the 1850s, most recently for its rich array of Triassic fossils. Since 2004, for instance, several skeletons have been unearthed of an extinct crocodile-like animal called Revueltosaurus, previously known only from its teeth. Early dinosaurs such as the dog-sized Coelophysis also roamed there, and radiometric dating has shown how these dinosaurs were related to those in other parts of the Americas3.

Spectacular, fossil-bearing rocks sprawl almost everywhere in the park, says Bill Parker, Petrified Forest’s palaeontologist. The challenge is tying separate discoveries into a coherent, well-dated story. Many surface rocks are weathered so badly that they distort fossil relationships and make radiometric dating all but impossible. “It’s not like the Grand Canyon, where you can just hike down and see all the rocks in their proper order,” says Parker. “A core eliminates all of that problem, when you get one single section all the way down.” Drilling in US national parks is allowed at the discretion of the park superintendent. Petrified Forest is unusual in calling itself a science park and in having Parker on staff as a full-time palaeontologist.

The big question for researchers is when drilling can begin. The team had hoped to start on 8 October, but that plan is now in doubt. Petrified Forest National Park, along with the rest of the US government, shut down on 1 October. The park will not reopen until Congress agrees on a plan to keep the government funded. If delayed too long, drilling may have to be rescheduled for next spring.

Ultimately, if the project’s science findings are strong, it will pave the way for further studies of the Triassic’s buried history. The team already has its eye on other cores that it could drill.