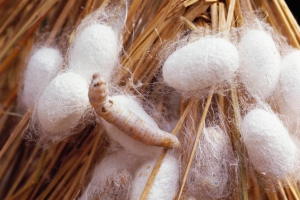 Male silkworms require less feed — and spin their cocoons with higher-quality silk — than female ones do, but until now separating the two sexes has been impractical.

The technology used to kill off the female mosquitoes that spread tropical diseases has been turned to a new species — silkworms.

It might seem counter-intuitive to destroy half the crop of such valuable creatures, which can yield a kilometre of silk thread from each cocoon. But male silkworms (Bombyx mori) are much more useful for farmers: they are more resistant to disease, eat less and produce better silk, says Luke Alphey, chief scientific officer at Oxitec, a biotechnology company based in Abingdon, UK. At present, separating males from females is impractical.

Oxitec has already developed male Aedes aegypti mosquitoes that have been genetically modified to pass on a 'lethal' gene to offspring that kills the young before they reach adulthood. The mosquitoes are now in field tests in Brazil and other countries, where it is hoped they will help to control dengue fever by ensuring wild female mosquitoes produce fewer viable offspring.

Now the company, working with researchers in China, is applying similar technology to an insect that people want to encourage rather than reduce.

In a paper in the Proceedings of the National Academy of Sciences1, the researchers describe how they genetically modify silkworms to produce a deadly build-up of a protein called tTAV. And by exploiting some of the genes that determine whether an animal is male or female, they ensure that this protein is expressed only in females. When silk farmers need the animals to breed normally, they can turn off the lethal switch simply by feeding the grubs an antibiotic called tetracycline.

Creating male-only silkworms is “something people have been looking at for really a very long time”, Alphey says. Previous attempts, such as by radiation-induced mutation, have had limited success.

Other aspects of silkworms could also be tweaked, says Fritz Vollrath, head of the Oxford Silk Group at the University of Oxford, UK. Vollrath's team has looked at the possibility of creating silkworms that can be immobilized on demand, which would make it possible to 'milk' the silk directly from the live worm, rather than laboriously pulling it from fully formed cocoons. The resultant silk could also be of better quality2.

Other researchers have tried to remove the gene for sericin, a compound that glues the threads together in the worms’ cocoons, although this has proven problematic, says Vollrath. Yet another team has created worms that produce a stronger type of silk that is normally made by spiders, rather than their traditional silk3.

Vollrath says that it will be important to show that the gene modification for male-only cocoons does not adversely affect the quality of the silk. “Silkworms have been bred over a couple of thousand years, and have been tweaked and tuned,” he says. “Playing directly with genes will potentially have an effect on silk production because it’s such a finely tuned protein-production machine.”

But, Vollrath says, you could then breed the modified animals again to get the desired traits. Vollrath comments that it should be possible to move the male-only production up to the commercial scale. And because B. mori is a domesticated animal that cannot fly, any genetic modifications are less likely to escape into the wild.