The Gemini Observatory’s star has been slow to rise. The publicly funded observatory boasts two of the world’s largest telescopes, and offers a rare opportunity to watch both the northern and southern skies from sites in Hawaii and in Chile. Yet it has lagged in terms of scientific productivity since it opened in 2000, and millions of dollars have been spent on overambitious, highly specialized instruments that were ultimately cancelled. “It felt like a child who had gone astray,” says Frederic Chaffee, who witnessed Gemini’s struggles while director of the rival Keck Observatory on Hawaii’s Mauna Kea. “It was frustrating to watch.”

But less than a year after Chaffee was drafted out of retirement to become Gemini’s interim director when his predecessor stepped down, the once faltering facility may finally be living up to its promise. Last week, at a meeting of the American Astronomical Society in Austin, Texas, Chaffee showed off results from several new instruments. These should benefit a range of observers at the twin 8.1-metre telescopes. “In the last year, Gemini has made huge progress in turning around the observatory,” says David Silva, director of the US National Optical Astronomy Observatory in Tucson, Arizona.

The turnaround is good news for astronomers of Gemini’s seven member nations: the United States, the United Kingdom, Canada, Chile, Australia, Brazil and Argentina. Many are already planning to exploit the new Gemini multi-conjugate adaptive optics system (GeMS), an instrument that saw first light at Gemini South in December.

Adaptive optics are used at large ground-based telescopes to correct for image distortions caused by the motion of Earth’s atmosphere. They monitor a bright guide star or backscattering from a laser beam fired by the observatory to measure the disturbances, then rapidly alter the shape of a mirror to correct them. But they sharpen only a small portion of the telescope’s field of view. Astronomers have known for more than a decade how to make corrections over a larger area — by performing three-dimensional tomography of the sky with multiple lasers (R. Ragazzoni et al.Nature 403, 54–56; 2000). But achieving this feat has been another matter.

With its 50-watt laser split into five beams, Gemini has managed it first. The area over which it has achieved sharpness is more than 10 times that of other systems. “This is a big step,” says Olivier Guyon, an adaptive optics expert at Japan’s 8.2-metre Subaru Telescope in Hawaii. “It’s going to be followed by everyone.” Guyon adds that the system will help astronomers to study the skies more efficiently, by bringing large objects, such as nearby galaxies, into focus all at once, and by allowing more distant objects to be studied in a single snapshot.

Gemini South also unveiled a long-awaited spectrograph in December. This should allow users to calculate distances to some of the Universe’s most remote objects, such as quasars, the luminous cores of distant galaxies containing giant black holes. Yet another instrument, an imager that could spot planets orbiting distant stars, is due by the end of the year. Gemini’s notoriously clunky software interface for scheduling observations has also been overhauled. 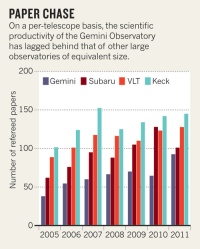 Finding ways to connect with — or at least not alienate — Gemini’s far-flung users is important, says Chaffee, because astronomers rarely fly out to the telescopes to conduct their observations. He is establishing a users committee that he hopes will represent observers’ concerns, and a science and technology committee, which met last November,that will aim to help Gemini avoid repeating the costly and impractical instrument choices made in the past.

But Chaffee believes that instruments such as GeMS are already starting to remedy years of poor scientific performance. Virginia Trimble, an astronomer at the University of California, Irvine, says that, on a per-telescope basis, both publication and citation counts for Gemini have fallen behind those of its rivals (see ‘Paper chase’), and the demand for telescope time has fallen. However, Gemini deputy director Nancy Levenson says that some of this decline in demand reflects waning interest by astronomers in the United Kingdom, which will end its membership of Gemini at the end of 2013.

Gemini’s international agreement will be revisited in 2015. By then, Chaffee will have long since returned to retirement. His one-year contract is up in May, and the Association of Universities for Research in Astronomy, which manages Gemini, is due to name a new director within weeks. “I’m trying to leave the place in as good a shape as I possibly can,” says Chaffee.