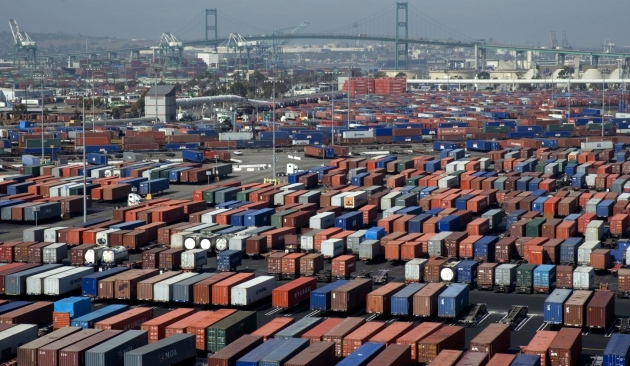 US Customs and Border Patrol

Physicists are researching a method that would use γ-rays to detect nuclear materials in shipping containers.

It is a border-control agent’s nightmare: a terrorist sneaks uranium or plutonium through a seaport and into an urban centre, and uses it to set off a dirty bomb or a nuclear weapon.

On 13 April at the American Physical Society meeting in Baltimore, Maryland, physicists will present research on a cargo-screening technology that could foil such a plot. The researchers say that a device involving the approach, which would scan shipping containers with beams of precisely tuned γ-rays, would be safer and more effective than current technology. The device could be several metres tall and stationary, or a smaller, portable unit.

Although the nuclear reaction that produces these γ-rays was demonstrated as early as the 1950s, for decades, no one had tested it for use in nuclear inspection, says Richard Sheffield, a physicist at the Los Alamos National Laboratory in New Mexico who was not involved in the latest work. Sheffield calculates that the method could decrease the radiation needed to detect nuclear materials by more than ten times, and calls the work “a significant advance”.

An anvil in a haystack

Interest from governments in screening cargo for nuclear material increased dramatically after the 11 September 2001 terrorist attacks. At present, the US Department of Homeland Security (DHS) uses passive-radiation detectors to scan all cargo containers entering the country by land and sea; similar systems are used in the United Kingdom and elsewhere. But passive detectors are prone to producing false positives caused by benign, but slightly radioactive materials such as cat litter and stoneware. More problematically, a terrorist can shield material such as uranium so that a passive system cannot detect it.

In the past few decades, active-screening technologies have become available. These devices produce images of cargo containers using high-energy γ-radiation, similar to medical X-rays. Technology currently used in the United States and United Kingdom generates this radiation through a process known as 'bremsstrahlung', in which decelerating charged particles emit γ-rays at a range of energies. The γ-rays travel through cargo and strike a detector on the other side, creating an image.

These images can alert inspectors to dense material hidden inside lighter cargo — a chunk of uranium inside a shipment of wheat, for example. But they cannot distinguish metals and other dense materials from one another, so shielding nuclear material is not that difficult. “If you take a nuclear weapon and you throw it into scrap metal or into some random cargo, it won’t look like anything,” says physicist Areg Danagoulian of the Massachusetts Institute of Technology (MIT) in Cambridge, who led the latest research.

At higher intensities, bremsstrahlung-based devices could provide information on the atomic number of material inside cargo, potentially differentiating between uranium and other metals such as iron. But achieving this level of precision requires more-powerful radiation than imaging does, and risks delivering dangerous doses of radiation to stowaways in cargo containers or to port workers.

To reduce radiation without sacrificing the ability to identify specific elements, Danagoulian and his colleagues used a particle accelerator at MIT’s Bates Linear Accelerator Center in Middleton, Massachusetts, to study a nuclear reaction between deuterium (an isotope of hydrogen) and boron. The reaction reduces radiation by releasing γ-radiation at two specific energies, 4.4 and 15.1 Megaelectronvolts, or MeV. Bremsstrahlung, in contrast, releases radiation at a broad range of energies.

Elements with higher atomic numbers absorb substantially more 15.1-MeV photons than do those with lower numbers. By comparing the counts of 15.1-MeV photons to those of 4.4-MeV photons striking a detector, Danagoulian and his colleagues can so far differentiate iron, tin, tungsten and lead. Though they have not tested uranium specifically, Danagoulian says that the element should be even easier to detect because it has a higher atomic number than those metals. The researchers plan to test their device on depleted uranium later this year.

The technique could also provide another way to detect nuclear material, Danagoulian adds. When 15.1-MeV photons strike uranium, they can trigger a controlled nuclear-fission reaction and release neutrons, which inspectors could then detect. Danagoulian stresses that the process carries no risk of initiating a chain reaction.

But he adds that more-advanced particle accelerators and detectors are needed before his team’s technique can be deployed. The accelerators need to produce beams that contain more photons at 4.4 MeV and 15.1 MeV than at present, and the detectors would need to process these photons more quickly.

Although still in its early stages, Danagoulian’s work seems promising, said an official from the DHS Domestic Nuclear Detection Office. “We think the technology has the potential to provide superior performance compared to current systems, while using substantially less radiation.”

However, the official, who asked not to be named, noted that a practical system would require smaller accelerators than the researchers currently use. It would also need to be tested on cargo containers, and meet various criteria related to the cost and complexity of operation. The Department of Homeland Security or other sources might support such development, he said; a practical device could still be a decade away.