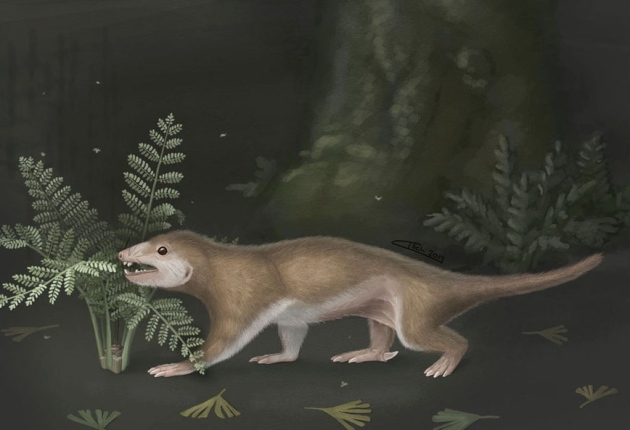 A fossil of the forest-floor-dwelling animal Megaconus suggests that its group predated mammals — whereas a fossil of its tree-dwelling cousin Arboroharamiya (see picture below) seems to show that the group belonged in the mammalian family tree.

Two fossils have got palaeontologists scratching their heads about where to place an enigmatic group of animals in the mammalian family tree. A team analysing one fossil suggests that the group belongs in mammals, but researchers looking at the other propose that its evolutionary clan actually predates true mammals. The situation begs for more analysis, more fossils, or both, experts say.

The fossils represent previously unknown species, described today in Nature1, 2. Both are members of the haramiyids, a group of animals that first appeared around 212 million years ago and that researchers first recognized in the late 1840s. Until now, the creatures have been known only from isolated examples of their distinctive teeth — which have some rodent-like features — and a single fragmentary jawbone. But both fossils described today include not only the distinctive teeth, but also vertebrae and bones from the limbs, feet and tails.

“It’s remarkable, for such an incredibly obscure group, to have two fairly complete skeletons pop up at the same time,” says Richard Cifelli, a vertebrate palaeontologist at the Oklahoma Museum of Natural History in Norman, who co-authored a related News & Views3. “These new fossils change everything.”

One of the haramiyids1 lived about 160 million years ago in what is now northeastern China and was well-adapted for life in the trees (see reconstruction below). It had relatively small hands and feet but exceptionally long digits, says co-author Jin Meng, who studies ancient mammals at the American Museum of Natural History in New York. Proportionally, the creature’s digits were even longer than those of many modern tree-dwelling mammals, and features on some of its tail bones hint that it may have had a prehensile tail. Meng and his colleagues placed the creature in a new genus, Arboroharamiya. 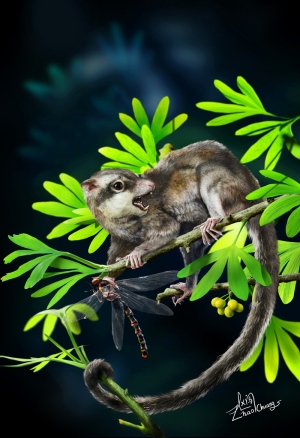 Based on the structure of Arboroharamiya's lower jaw, palaeontologists believe that the animal had a mammalian-like ear.

The shape of the creature's teeth and the way they meshed while chewing suggest that Arboroharamiya either fed on seeds or was omnivorous, says Meng. And each side of its lower jaw comprised only one bone, making it more like the jaw of modern mammals than of reptile jaws, which have three further bones that in mammals have evolved into the bones of the middle ears. This suggests that Arboroharamiya probably had a mammal-like ear structure. (No ear bones were found in the specimen, but these tiny bones are rarely preserved in mammalian fossils.)

To investigate the animal's evolutionary relationships, the team analysed more than 400 anatomical features from more than 50 different species of ancient mammals, most of which lived between 250 million and 100 million years ago. Their calculations put Arboroharamiya well within the mammal family tree, and suggested that mammals, as a group, first appeared somewhere between 228 million and 201 million years ago.

The haramiyid species described in the second Nature paper2 was unearthed from rocks in Inner Mongolia, China, that dated to between 165 million and 164 million years ago. The animal had a particularly large cusp on the first premolar tooth in its lower jaw, so the researchers put it in a novel genus, Megaconus.

Unlike Arboroharamiya, this creature probably lived on the forest floor: in each of its rear legs, the two lower bones were fused together at the top and bottom, similar to the leg bones of ground-dwelling armadillos (see reconstruction at the top). The creature weighed about 250 grams — about the size of a chipmunk — and probably had a shambling gait, says Thomas Martin, a palaeontologist at the University of Bonn in Germany.

He and his colleagues drew up a family tree for Megaconus on the basis of comparisons with animals from more than 100 other groups. The results suggest that the common ancestor of all extant mammals lived about 180 million years ago — and that the haramiyids, including Megaconus, branched away from the family tree some 40 million years before true mammals evolved.

Unfortunately, neither family tree is entirely consistent with all the data. Cifelli says that the confusion can be cleared up only with more fossils — preferably ones that include all or a significant part of a skull, whose anatomical features are particularly instructive in working out evolutionary relationships. “To break this tie, we really need more information,” he says.

But there’s another possibility, says Guillermo Rougier, a vertebrate palaeontologist at the University of Louisville in Kentucky. Megaconus and Arboroharamiya “have been assigned to the same group, but they’re very different creatures,” he says. Indeed, he adds, Arboroharamiya, the more advanced of the two species in terms of its jawbone and other features, may actually belong in a long-successful but now-extinct group of mammals called multituberculates — a realignment that would explain the disparity between family trees drawn up by these individual studies.

One thing to do now, he suggests, is conduct a single analysis that includes both of the new species, and then see what the mammalian family tree looks like.