Birds can master new skills without the gradual improvements that normally occur with training. The improvement is all down to an ancient part of the brain that is present in all vertebrate species.

Learning complex motor skills such as speech or dance movements involves imitation and trial and error. Young songbirds, for example, learn to sing by copying an adult tutor, and practising the song thousands of times until they have perfected every syllable. 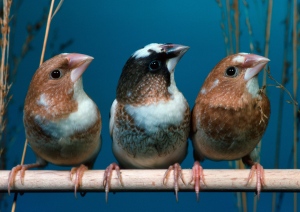 Bengalese finches learned to sing a new song perfectly, even when their practice showed no improvement.

The underlying brain mechanisms are unknown, but one influential model1 states that structures called the basal ganglia generate a variety of movement patterns that are tried out by the motor cortex, which executes the movements. The basal ganglia then reinforce the best pattern by transmitting a rewarding dopamine signal after receiving feedback on the result of the movement from the motor cortex.

But research published today in Nature2 challenges this view.

Jonathan Charlesworth, a neuroscientist at the University of California, San Francisco, and his colleagues trained Bengalese finches (Lonchura striata domestica) to modify the pitch of one song syllable in response to white noise.

During the training, the researchers used a drug to block the output of the bird's anterior forebrain pathway (AFP), a bundle of nerve fibres that forms a loop circuit between the basal ganglia and motor cortex. The blocking prevented the gradual improvement that would normally occur as the birds practised, so despite trying, the finches did not manage to modify their song. Instead, they continued to produce it at the original pitch.

But when the researchers unblocked the AFP output after training, the birds immediately produced an expert performance at the modified pitch.

All in the mind

Inactivating the AFP completely during the training prevented any learning from taking place at all. This indicates that activity in the AFP is essential for learning motor skills, and that the pathway can covertly learn to execute a new skill without contributing to the practice and without feedback from the motor cortex.

The findings suggest that basal ganglia circuits monitor the variations in behaviour and then direct the motor cortex to execute the most successful ones.

“Our earlier work indicated that the nervous system keeps track of fine-grained fluctuations in behavioural variation and uses them for trial-and-error learning,” says Charlesworth. “These new results suggest that the basal ganglia learn rapidly and train the motor cortex, which appears to be a repository where the learning is consolidated.”

The basal ganglia probably receive detailed information about behavioural variations from the premotor cortex, which plans the movements. Because the birds' performance improved immediately when the AFP output was unblocked, the researchers deduce that activity in the basal ganglia is precisely synchronized with that in the motor system.

"This study represents an important step in identifying brain mechanisms that mediate trial-and-error behavioural learning,” says Richard Mooney, a neurobiologist at Duke University in Durham, North Carolina. “It suggests that the basal ganglia can learn how to improve behaviour even when they are prevented from changing it. This stands in contrast to the popular idea that the basal ganglia must actively drive variability for trial-and-error learning to occur."

The basal ganglia have been highly conserved by evolution, and serve similar functions in every vertebrate species. In humans, problems with basal ganglia function are characteristic of movement disorders such as Parkinson’s disease and Huntington’s disease.

“We hope that our findings will help clinicians to interpret the symptoms of these disorders and help scientists to develop more effective treatments,” says Charlesworth.

Charlesworth adds that he will soon begin developing an ultrasound neuromodulation technique. This could potentially be used to alter the activity of deep brain structures such as the basal ganglia, facilitating non-invasive treatments for neurological disease and improving cognitive function.