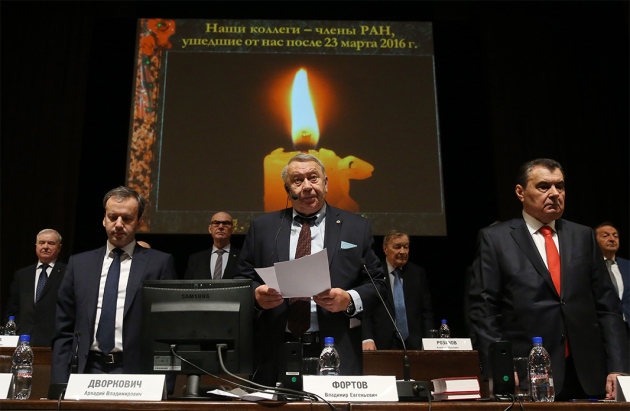 A meeting at the Russian Academy of Sciences left scientists reeling after all three candidates for its presidential election, including the incumbent president Vladimir Fortov (centre), pulled out.

Academics at Russia’s premier science body have been left shocked and confused after an election that was supposed to determine the new president of the Russian Academy of Sciences (RAS) was cancelled at the last minute.

The three candidates — including incumbent president Vladimir Fortov — pulled out on 20 March, just two days before the election was scheduled to happen. Three days later, the Russian government appointed academy vice-president Valery Kozlov, who had not planned to stand in the election, as acting leader.

The reasons for the candidates’ withdrawal remain mysterious. But the events are just the latest upheaval at an organization still grappling to come to terms with reforms that began four years ago.

“No one asking to postpone the election actually said anything specific,” says Askold Ivantchik, a historian at the RAS Institute of World History in Moscow and the New York University Institute for the Study of the Ancient World. “Fortov mentioned some procedural complaints — of which we know nothing. His opponents said nothing at all. Their withdrawals were, frankly, unseemly as they gave no arguments.”

The RAS, established in 1724, is the umbrella body for Russia’s largest network of research institutions. It manages basic research and acts as an authority on science policy. But its past few years have been tumultuous — with a surprise reform announced by the government in 2013.

The reform — aimed at modernizing the academy — began months after Fortov had been elected for his first term. It caused outrage among some scientists because it transferred budget and administrative controls to a new government agency, largely stripping the RAS of its powers.

Fortov’s term as president was due to end on 27 March, and last week’s cancelled election would have been the first since the reforms. The RAS has been electing its presidents since 1917.

On the first morning of a pre-election conference, the two challengers, biologist Alexander Makarov and physicist Vladislav Panchenko, announced to a room of shocked scientists and journalists that they were dropping out of the race. They gave no reason why.

Fortov, the election favourite endorsed by the academy’s governing council, withdrew immediately afterwards, saying that he could not run unopposed.

Some clues to what happened emerged from interviews that Makarov and Panchenko gave to the government-run newspaper Rossiyskaya Gazeta the day before they withdrew. Makarov called election procedures at the academy "archaic" and "nonsensical". Panchenko mentioned that he and several unnamed RAS members had sent a letter to the governing council asking it to make the election procedure — which "leaves room for manipulation" — more transparent.

The letter was not made public, and neither Makarov nor Panchenko responded to Nature’s requests for comment.

Rumours are rife in Russia’s scientific community. Valery Rubakov, a theoretical physicist at the RAS Institute for Nuclear Research in Moscow, called the developments “extraordinary”. He told Nature that “without pressure ‘from above’, this turn of events would not have been possible”.

Rubakov and at least two other members of the academy, physicists Vladimir Zakharov and Gennady Mesyats, suggested that Fortov had had a meeting at the Kremlin on Friday 17 March. When asked about this allegation at the meeting, Fortov neither confirmed nor denied it. Mesyats, speaking at the election conference, called the events culminating in the election’s cancellation a "special operation" against RAS.

Kozlov, a prominent mathematician, oversaw a mid-2000s internal push to reform the RAS that had limited results. He is expected to serve as acting president until a presidential election takes place — which, under the academy’s charter, should be no later than 28 September.

Experts agree that turmoil in the academy, which is revered as a historic institution but has held little sway since the reforms, seems unlikely to affect scientists on the ground beyond sending a symbolic message. “This was yet another demonstration of a profound level of disrespect for the scientific community,” says Mikhail Gelfand, deputy director of the RAS Institute for Information Transmission Problems in Moscow. “The people doing science in Russia were told, once again, that no one asked for their opinion."