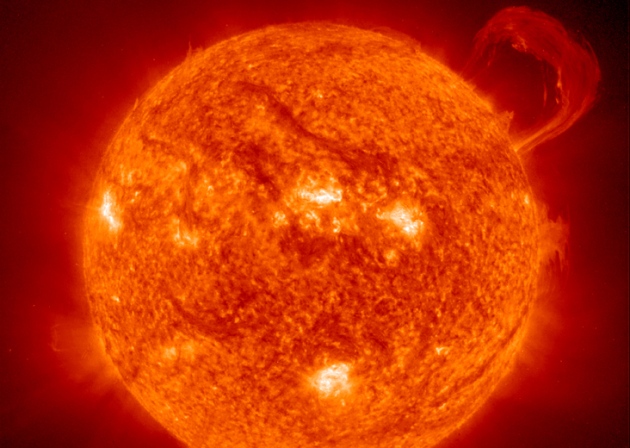 The Sun did not wipe out all of the water contained in the interstellar cloud from which it formed, scientists say.

As much as half of the water in Earth’s oceans could be older than the Sun, a study has found.

By reconstructing conditions in the disk of gas and dust in which the Solar System formed, scientists have concluded that the Earth and other planets must have inherited much of their water from the cloud of gas from which the Sun was born 4.6 billion years ago, instead of forming later. The authors say that such interstellar water would also be included in the formation of most other stellar systems, and perhaps of other Earth-like planets.

The dense interstellar clouds of gas and dust where stars form contain abundant water, in the form of ice. When a star first lights up, it heats up the cloud around it and floods it with radiation, vaporizing the ice and breaking up some of the water molecules into oxygen and hydrogen.

Until now, researchers were unsure how much of the 'old' water would be spared in this process. If most of the original water molecules were broken up, water would have had to reform in the early Solar System. But the conditions that made this possible could be specific to the Solar System, in which case many stellar systems could be left dry, says Ilsedore Cleeves, an astrochemist at the University of Michigan in Ann Arbor, who led the new study.

But if some of the water could survive the star-forming process, and if the Solar System’s case is typical, it means that water “is available as a universal ingredient during planet formation”, she says.

To find out, Cleeves and her colleagues modelled the conditions soon after the Sun lit up. They calculated the amount of radiation that would have hit the Solar System, both from the young star and from outer space, and how far that radiation would have travelled through the cloud.

Those conditions determine how new water molecules form from hydrogen and oxygen, and in particular the odds that the molecules include deuterium, an isotope of hydrogen whose nucleus contains a neutron, in addition to the usual single proton. The model predicted an abundance of deuterium-containing water, also known as heavy water, that was lower than that in the Solar System’s water today.

But the interstellar clouds where Sun-like stars are currently forming — and thus, presumably, the material from which the Sun formed — have a higher proportion of heavy water compared to the current Solar System. This is because these clouds are subject to the continuous bombardment of cosmic rays, which tend to favour the inclusion of deuterium. Therefore, the authors concluded, the young Sun’s radiation was insufficient to account for the amount of heavy water seen in the Solar System today, and some must have existed before. They estimate that somewhere between 30% and 50% of the water in Earth’s oceans must be older than the Sun.

“If the disk can’t do it, that means we must have inherited some level of these very deuterium-enriched interstellar ices from the birth environment of the Sun,” says Cleeves. The study was published in Science on 25 September1.

Ewine van Dishoeck, an astrochemist at the Leiden Observatory in the Netherlands, says that the study’s conclusions are based on good arguments but are still only theoretical. But confirmation could come next year, she adds, when the Atacama Large Millimeter Array, a radio telescope in Chile’s Atacama Desert, begins to study the chemical processes underlying the proportion of heavy water in protoplanetary disks.

Even if the formation of typical stellar systems does not destroy all of the pre-existing water, it does not mean that water-drenched planets need to be the norm throughout the Universe. Venus and Mercury have no water, and Mars seems to have lost most of the water it once had — and it is still unclear what determines whether a planet gets to become wet and to stay that way, says Cecilia Ceccarelli, an astronomer at the Institute of Planetology and Astrophysics in Grenoble, France.