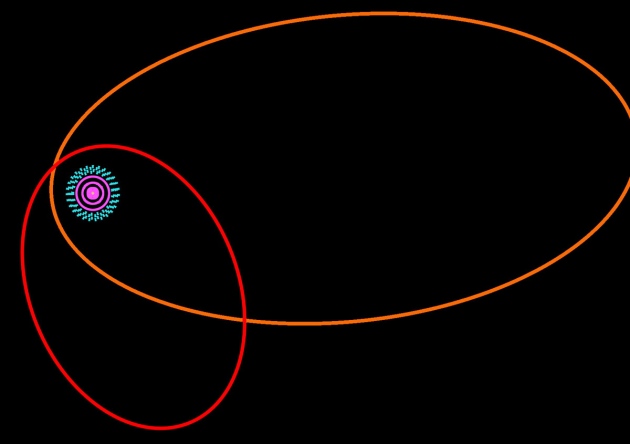 This orbit diagram shows the paths of Oort cloud objects 2012 VP113 (red) and Sedna (orange), which circle the Kuiper belt (blue) at the Solar System's edge.

The Solar System just got a lot more far-flung. Astronomers have discovered1 a probable dwarf planet that orbits the Sun far beyond Pluto, in the most distant trajectory known.

Together with Sedna, a similar extreme object discovered a decade ago2, the find is reshaping ideas about how the Solar System came to be. “It goes to show that there’s something we don’t know about our Solar System, and it’s something important,” says co-discoverer Chad Trujillo, an astronomer at Gemini Observatory in Hilo, Hawaii. “We’re starting to get a taste of what’s out beyond what we consider the edge.”

Trujillo and Scott Sheppard, an astronomer at the Carnegie Institution for Science in Washington DC, report the finding today in Nature.

“This is a great discovery,” says Michael Brown, a planetary astronomer at the California Institute of Technology in Pasadena. “We’ve been searching for more objects like Sedna for more than 10 years now.” Finding another one like it reduces the chances that Sedna is a fluke, he says. But astronomers now have to come up with ideas to explain how these objects remain tightly gravitationally bound to the Sun when they orbit so far away.

The newfound object's official name is 2012 VP113, but the discovery team calls it VP for short, or just 'Biden' — after US Vice-President Joe Biden. In several years time, after observations have pinned down its orbit, the scientists will submit a name for consideration by the International Astronomical Union (IAU), the organization in charge of celestial nomenclature.

The classical planetary portion of the Solar System ends at Neptune, which orbits the Sun at about 30 times the Earth–Sun distance, a cosmic yardstick known as an astronomical unit (AU). One AU is approximately 150 million kilometres. Beyond Neptune is a realm of icy bodies, known as the Kuiper belt, that includes Pluto. This region stretches from roughly 30 to 50 AU. And beyond that lies the Oort cloud, with Sedna at its inner edge and comets farther out. 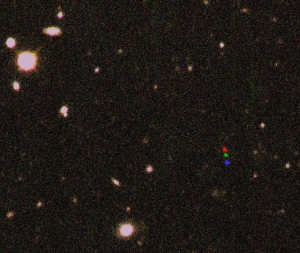 The body is so distant that when Sheppard first spotted it, it was the slowest-moving astronomical object he had ever seen. The farther away something is, the slower it seems to move across the sky. Trujillo and Sheppard have been hunting for distant objects with the Dark Energy Camera, a 520-megapixel camera on the 4-metre Blanco telescope at the Cerro Tololo Inter-American Observatory in Chile. They captured 2012 VP113 during their first observing run, in November 2012, on the fifth image of the hundreds they would eventually snap. “We got lucky right away,” says Sheppard.

For months they tracked the object, until its full orbit became more apparent. But whereas Sedna can stray as far as 1,000 AU from the Sun, 2012 VP113 gets no further than about 452 AU. It seems to be more closely bound by the Sun’s gravity, which is something of a mystery, says Sheppard.

At 450 kilometres across, 2012 VP113 is about half the size of Sedna. If, as scientists expect, it is made mostly of ice, then its gravity probably pulls it into a spherical shape. This would qualify it as a dwarf planet under the revised rules of planethood drawn up by the IAU in 2006.

There are several competing ideas for how objects such as Sedna and 2012 VP113 got to where they are today. One leading hypothesis proposes that in the Solar System’s infancy, a nearby star gravitationally perturbed the coalescing system and dragged some fragments out towards the edge. Another possibility is that a massive rogue planet passed through at some point, kicking objects from the Kuiper belt outwards into the inner Oort cloud.

Either way, Sedna and 2012 VP113 may be just the tip of the iceberg, says Megan Schwamb, an astronomer at the Academia Sinica in Taipei, Taiwan. She has looked for Sedna-like objects before3, and has modelled how much material could be out there. The inner Oort cloud could contain some 10–100 times the mass of the Kuiper belt, she says.

Trujillo and Sheppard estimate that there are hundreds more inner Oort objects waiting to be found. They are currently tracking six more candidates that could belong to extreme parts of the Solar System.