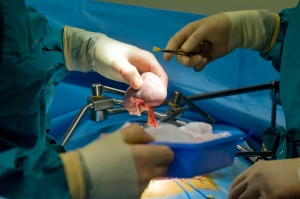 Kidney transplant-recipients have to take immunosuppressant drugs for the rest of their lives to prevent rejection.

Graft-versus-host disease (GvHD) is a common and often deadly complication of bone-marrow transplantation that occurs when immune cells from an unrelated donor attack the transplant recipient’s tissue. Now, researchers have for the first time managed to completely replace people’s bone-marrow-derived stem cells with those from unrelated donors without causing GvHD1. And because of this, the recipients could also accept kidneys from the same donors without the need for drugs that suppress the immune system.

“The outcome has been amazing,” says Lindsay Porter, a 47-year-old Chicago resident with polycystic kidney disease who was one of the study subjects. She has been off immunosuppressive drugs for seven months. “I feel so normal, it feels like it’s not a big deal.”

But according to experts in the field, the findings, published today in Science Translational Medicine1, are a huge deal. “It’s kind of difficult to believe,” says Tatsuo Kawai, a transplant surgeon at Massachusetts General Hospital in Boston, who wrote a commentary to accompany the paper. “It’s almost common sense to have GvHD in mismatched individuals.”

The latest study builds off of work Kawai and his colleagues began fourteen years ago, when they launched the first clinical trial that attempted to use bone marrow to induce immune tolerance for kidney recipients, to avoid the sometimes dangerous side effects of life-long immosuppressive therapy.

Working first in people with perfectly immune-matched siblings2 and then with partially mismatched donor-recipient pairs3, the researchers showed that the majority of individuals could achieve stable kidney function and successfully wean off of their immunosuppressants with few problems — in one case for up to nine years. But the study subjects only maintained noticeable levels of the foreign bone marrow for a few weeks, and the protocol didn’t work for everybody. Some researchers speculated that maintaining higher levels of donor immune cells for longer could help to improve the success rate.

For the latest study, a team led by Suzanne Ildstad, director of the University of Louisville’s Institute for Cellular Therapeutics in Kentucky, found a way to avoid GvHD by using a regimen involving chemotherapy, radiation and blood stem cells manipulated to eliminate those that cause GvHD while retaining specialized bone-marrow-derived cells they called ‘facilitating cells’.

Ildstad and her colleagues report that five of eight people who underwent the treatment were able to stop all immunosuppressive therapy within a year after their kidney and stem-cell transplants, four of which came from unrelated donors. Notably, all of these patients maintained entirely donor-derived immune systems with no signs of GvHD. Ildstad and her team have since treated seven more people. “We continue to see good results,” she says.

It might be premature, however, to say for certain that the trial participants are in the clear. “The question is: will these patients remain free of GvHD?” says David Sachs, director of the Transplantation Biology Research Center at Massachusetts General Hospital. “You would hope that it’s true, but it’s a little early to claim that.”

Beyond organ transplants, many experts think that the protocol could be used to treat other diseases that require bone marrow transplants but for which there are severe shortages of matched donors. “This opens up bone-marrow transplants to virtually any patient out there with a haematological condition” such as leukaemia or sickle-cell anaemia, says John Tisdale, a haematologist at the US National Heart, Lung and Blood Institute in Bethesda, Maryland.

It remains unclear whether the secret to Ildstad’s recipe is the facilitating cells or the timing of a certain chemotherapy drug, called cyclophosphamide, that is used to prevent graft rejection and GvHD. “The facilitating cell adds an extra level of complexity that might not be necessary,” Tisdale says. The question is difficult to answer — all of the study subjects received the facilitating cells.

Moreover, much about the cells themselves and the method used to isolate them remain shrouded in a veil of secrecy — Ildstad is seeking a way to commercialize the approach through a company she founded called Regenerex, based in Louisville. “It’s difficult to assess something that doesn’t provide the key methodology,” says Megan Sykes, director of the Columbia Center for Translational Immunology at Columbia University in New York. “Nobody is quite sure what these cells are.”