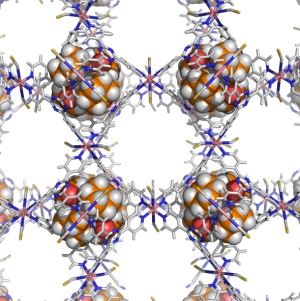 Embedding molecules into a sponge-like cage to probe their structure is not the blockbuster technique it was once expected to be.

Nearly two years after his technique for determining molecular structures promised to revolutionize chemistry — and then failed to deliver — Makoto Fujita is touring the world armed with fresh data.

On 3 June at Harvard University in Cambridge, Massachusetts, the University of Tokyo chemist detailed work that his team has done since doubts about the method first arose in 2013. Although Fujita's most recent data could bolster the community’s faith in the validity of the technique, it is unlikely to foster the revolution that many had anticipated, says George Sheldrick, a structural chemist at the University of Göttingen in Germany. “It can give useful results in special cases,” says Sheldrick, who received a visit from Fujita recently. “But it’s not a general method.”

The best molecular-structure data — such as those that revealed the architecture of DNA — are often obtained by analysing how molecules diffract X-rays. But to obtain them, the molecules must first be crystallized in a tidy, repeating lattice.

Coaxing a molecule to crystallize can be a time-consuming and frustrating process of trial and error. Fujita’s method introduced a shortcut by creating what he calls a crystalline sponge, made from metal–organic molecules. When dropped into a tube containing the sample of interest, the sponge will absorb some of these target molecules, which occupy cavities in its lattice. The result: a stable, repeating array of molecules that are suitable for X-ray diffraction.

In early 2013, a paper that described the method was published in Nature1 and received with great enthusiasm. Six months later, the authors followed with a correction2 to the paper’s key finding — the previously unknown structure of a molecule called miyakosyne A. “The original paper was a small disaster,” says Sheldrick. “It had some extremely sloppy crystallography in it.”

Fujita, who is described by colleagues as a careful and creative chemist, agrees that the data were of lower quality than researchers are accustomed to seeing. “If this were photography, we would say the picture of our molecule was unfocused,” he says. But he adds that the initial paper was meant to showcase an initial proof-of-concept.

Fujita gathered his lab together and ordered that henceforth, the team would focus on improving the quality of the technique until colleagues were satisfied that it is sound.

Finally, Fujita is ready to unveil the results. “It is no longer a prototype,” he announced at the Harvard seminar. “Now it is a product.”

The team has made substantial improvements, says Sheldrick, but its efforts also highlight the method’s limitations. At the Harvard seminar, Fujita outlined a list of characteristics for molecules to be suitable for the method. They should not dissolve readily or be too reactive or flexible, he said. They must also be no larger than the cavities in which they bind to the sponge. That rules out many molecules, says Sheldrick.

And Fujita says that his lab tried to develop a protocol that would apply to most molecules, only to discover that one does not exist. “There is no standard protocol,” he says. “For every substrate, we had to optimize the reaction conditions.”

For chemist Derek Lowe, author of the popular blog In the Pipeline, these limitations came as little surprise. Lowe says that the first thing he did after reading Fujita’s 2013 paper was order reagents to create his own crystalline sponges. He was able to reproduce Fujita’s findings, but learned first-hand how fickle the method could be. “It does work,” he says. “But it’s not very robust.”

One problem is that sample molecules sometimes bind to the same sponge in different orientations, throwing off the regular array needed for high-quality data. It is also difficult to coax sample molecules to fully occupy the cavities in the sponge. At the Harvard seminar, Fujita provided data indicating that the more saturated the sponge, the better the data. He also showed ways his lab had found to improve this parameter, but even so, the data he presented rarely acheived the level of occupancy needed to compete with classical crystals.

The relatively poor quality of the data might tempt researchers to 'clean up' their diffraction patterns in inappropriate ways, says Peter Müller, a crystallographer at the Massachusetts Institute of Technology in Cambridge. “There is a lot of room for fudging things,” he says. “If one is not ethical or very careful, there is the danger that one would get the wrong results.”

But used correctly, the method could find a niche in the evaluation of compounds that cannot be crystallized alone, or that are available in quantities too minute for crystallization, says Lowe. Fujita says that a company has agreed to commercialize the crystalline sponge, and his lab and others are working to develop other sponges that could bind to different types of molecules.

“It’s not witchcraft,” says Müller. “It’s a perfectly valid method, but you have to be an experienced crystallographer to work with it.”