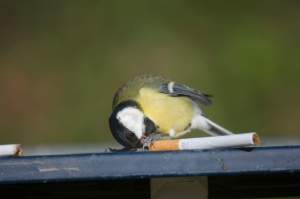 City birds may use cigarettes as substitutes for fresh vegetation that drives away parasites.

Stuffing cigarette butts into the lining of nests may seem unwholesome. But a team of ecologists says that far from being unnatural, the use of smoked cigarettes by city birds may be an urban variation of an ancient adaptation.

Birds have long been known to line their nests with vegetation rich in compounds that drive away parasites. Chemicals in tobacco leaves are known to repel arthropods such as parasitic mites, so Monserrat Suárez-Rodríguez, an ecologist at the National Autonomous University of Mexico in Mexico City, and her colleagues wondered whether city birds were using cigarette butts in the same way.

In a study published today in Biology Letters1, the researchers examined the nests of two bird species common on the North American continent. They measured the amount of cellulose acetate (a component of cigarette butts) in the nests, and found that the more there was, the fewer parasitic mites the nest contained.

The team also used heat traps to test whether the repellent effect of the cigarette butts was related to their nicotine content, rather than to their structure or other features. Suárez-Rodríguez and her colleagues placed traps in the nests of 27 house sparrows (Passer domesticus) and 28 house finches (Carpodacus mexicanus) on their university campus. The traps, which use warmth to lure parasites close, were fitted with cellulose fibres and filters from either smoked or unsmoked cigarettes, as well as adhesive tape to catch the arthropods.

“Might these birds show a preference for cigarette brands high in nicotine?”

“It really makes me wonder: might these birds show a preference for cigarette brands high in nicotine? If they did, that might suggest this behaviour has truly evolved as an adaptive response to challenges from parasites,” says Timothy Mousseau, an ecologist at the University of South Carolina in Columbia.

As well as having anti-parasite effects, Suárez-Rodríguez cautions there may be as-yet unknown negative effects for the birds, because many compounds in cigarette butts are known carcinogens, and some are pesticides.