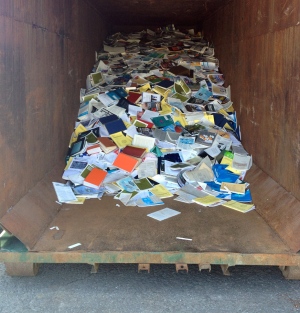 This anonymous photograph, which circulated in the Canadian media, was said to show books discarded by a Fisheries and Oceans Canada library in Mont-Joli, Quebec.

Scientists in Canada are up in arms over the recent closure of more than a dozen federal science libraries run by Fisheries and Oceans Canada (DFO) and Environment Canada.

The closures were mostly completed by last autumn, but hit the headlines last week when pictures of dumpsters full of scientific journals and books began circulating online (see picture). Some of facilities that have been closed include the library at the century-old St. Andrews Biological Station in New Brunswick, which had just completed a multi-million-dollar refurbishment a year earlier, and the library at the Freshwater Institute in Winnipeg, Manitoba. The libraries housed hundred of thousands of documents on fisheries and aquatic science, such as historical fish counts and water-quality analyses.

Scientists fear that valuable archival information is being lost, and that the government, which is seen as hostile to environmental science, has little interest in preserving it.

“One way to avoid using evidence in policymaking is not to collect it, or to get rid of historical evidence,” says Scott Findlay, a biologist at the University of Ottawa and co-founder of the campaign-group Evidence for Democracy.

Over the past two years, the DFO has closed 7 of its 11 aquatic-science reference libraries. The closures will save Can$443,000 (US$405,000) a year, according to the department. Environment Canada has also closed or merged 12 of its libraries and reading rooms as part of its 'modernization' initiative.

In a statement, fisheries minister Gail Shea said that very few people from outside the department made use of the libraries, and that the majority of users preferred to access the collections electronically. All of the information is supposedly due to be digitized and become available for free online. She added that only duplicate or irrelevant materials had been discarded, and only after they had first been offered to other libraries, department staff and the general public.

But Findlay says that it is not clear that all of the records will remain accessible, or that the department has the resources to digitize its entire collection. “We don’t know what has been discarded, what criteria was used or how the digitization will happen,” he says. “The rationale was cost-cutting, so where is the money for digitization going to come from?”

Findlay is also concerned that the loss of historical environmental information will hurt policy-making. “If we no longer have historical records, we don’t know the baseline measurements,” he says. “So we’ll be unable to make decisions based on historical conditions.”

Of most concern is the so-called grey literature — information such as conference proceedings and internal departmental reports that were not formally published in books or peer-reviewed journals. Findlay and others are worried that those documents could sit in warehouses for years waiting to be digitized, or even be thrown away.

When the department offered surplus and duplicate material to the public, many groups across the country stepped in to preserve useful information. The Union of British Columbia Indian Chiefs (UBCIC) received 32 boxes of material in December, and is expecting more from the DFO's Institute of Ocean Sciences in Sidney, British Columbia, which is receiving material from libraries that are closing. “I offered to take anything and everything they are willing to give us,” says Alissa Cherry, director of the UBCIC's resource centre. The group will make most of the data available in their own resource centre, and “find a good home” for the rest, says Cherry.

Kennedy Stewart, the science spokesperson for the opposition New Democratic Party, says that he is glad people are stepping up to save the information, but he is concerned that some of it is going to private companies. “It would be much better if it was in regular libraries,” he says. Stewart and his colleague, fisheries critic Robert Chisholm, have written to Shea, asking for more information and requesting that the closures be stopped. Stewart has also introduced a private member’s bill in the House of Commons that would create a Parliamentary Science Officer position to provide independent scientific advice to parliament.

Findlay says that the controversy over library closures is the latest in a string of incidents that shows the government’s lack of respect for scientific information in decision making. A June 2013 survey of federal scientists by the Professional Institute of the Public Service of Canada, a union, found that 90% felt that they were unable to speak freely to the public about their work. Canada’s information commissioner is investigating complaints over this alleged “muzzling” of scientists.