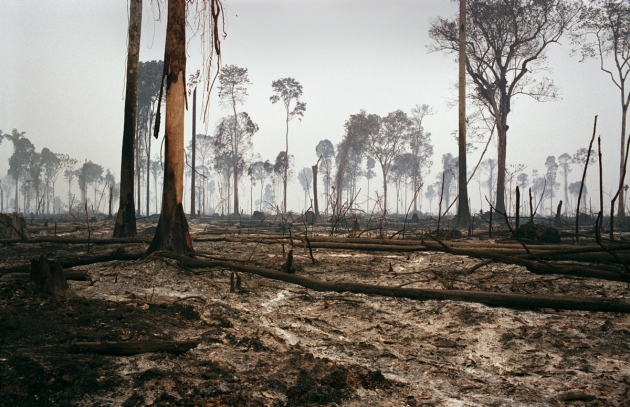 Rural pressure has produced a bill that could see increased deforestation in favour of agriculture in Brazil.

The sound of chainsaws in the Amazon rainforest has faded in recent years as deforestation has slowed, last year dropping to less than one-third of its long-term average. But last week, the lower house of Brazil’s National Congress passed a bill that observers say could drastically reduce forest protection.

An organized coalition of rural agricultural interests prevailed in vote after vote during debates, approving amendments that would, for example, scale back forest protections along rivers and hills, give state and local governments more authority over forests, and relieve landholders of the responsibility of reforesting illegally cleared land. The bill would also eliminate a requirement that landowners seeking agricultural loans from the government register their land, document any illegal clearance and submit a plan to come into compliance if they have cleared forests illegally.

Environmentalists hope that pressure from conservation groups and media attention on next month’s United Nations Conference on Sustainable Development (Rio+20) in Rio de Janeiro will influence Brazil’s President Dilma Rousseff to veto the most radical elements of the legislation.

Passed by a 274–184 vote on 25 April, the bill is a revision of the country’s ‘forest code’, which includes a requirement that landowners in Brazil maintain a minimum proportion of native forest on their land, ranging from 20% in the Atlantic forest along the coast to 80% in the Amazon basin.

Although the code has been on the books since 1965, enforcement increased in the past decade under Rousseff’s predecessor, Luiz Inácio Lula da Silva. That enforcement, combined with broader agricultural trends and mounting public pressure, has helped Brazil to reduce deforestation to its lowest level in more than 20 years (see ‘Turning the tide’). 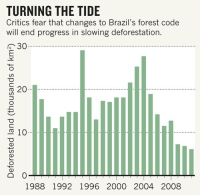 “Brazil has justifiably held up its record on deforestation in the Amazon in recent years,” says Steve Schwartzman, director of tropical forest policy at the Environmental Defense Fund in Washington DC. “But the changes proposed in what passed the House are fully capable of reversing that trend.”

The legislation has been working its way through the National Congress since 2010, motivated by a rural backlash against the crackdown on deforestation. The Brazilian Confederation for Agriculture and Livestock, one of the main business groups supporting the bill, argues that the forest code has become too burdensome. Pointing out that around 28% of the country’s 851 million hectares is dedicated to agriculture whereas 61% is forest, the organization says that by approving the law, Brazil’s Congress has chosen “the path of sustainable agricultural production”.

The bill’s fate now rests with Rousseff, whom environmentalists have never fully trusted despite her pledges to maintain the policies of her predecessor, including a commitment to an 80% reduction in the average deforestation rate by 2020. Although Rousseff is predicted to sign the bill, many expect her to use her veto powers to remove its most radical provisions, including one that would grant amnesty to people who violated the forest code before July 2008. Rousseff will have 15 days to make her decision once the legislation reaches her desk.

Last December, Brazil’s Senate passed a more moderate version of the bill, also opposed by environmentalists, and some senators are now making moves to try to vote again on a fall-back version that Rousseff could accept while rejecting the House bill in its entirety. Some speculate that the administration tacitly allowed the ruralistasto advance their agenda in the lower house while planning to veto extreme provisions that were not included in the Senate version, says Paulo Moutinho, an ecologist who heads the Amazon Environmental Research Institute in Brasilia. “The bill is so bad now that the president can use her veto and say, ‘Look, I’m doing the right thing’,” he adds.

That would help Rousseff burnish her green credentials just in time for Rio+20, the twentieth anniversary of the Earth Summit. She has seen her effigy paraded through the streets of Brasilia in recent months, as protesters skewered her record on other environmental issues.

That record includes pushing forward with the controversial Belo Monte dam on the Xingu River in the eastern Amazon, set to be the world’s third largest when complete. Opponents of the project accuse the Rousseff administration of disregarding the rights of indigenous peoples and scaling back protected areas. In March, a dozen social and environmental groups warned that Brazil is in danger of being “both host and villain” at Rio+20.