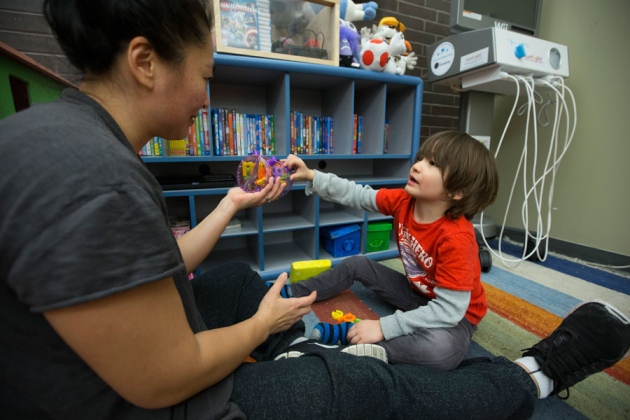 Teaching parents of children with autism how to interact more effectively with their offspring brings the children benefits that linger for years, according to the largest and longest-running study of autism interventions.

The training targeted parents with 2–4-year-old children with autism. Six years after the adults completed the year-long course, their children showed better social communication and reduced repetitive behaviours, and fewer were considered to have “severe” autism as compared to a control group, according to results published on 25 October in The Lancet1.

“This is not a cure,” says child psychiatrist Jonathan Green of the University of Manchester, and an investigator on the study. “But it does have a sustained and substantial reduction in severity and that’s important in families.”

John Constantino, a child psychiatrist at Washington University in St. Louis, Missouri, says that the results are “monumentally important”, because there has been little evidence showing that interventions for autism at an early stage are effective — even though researchers already broadly endorse the idea. "It is a rare long-term randomized controlled trial in a field in which there exists almost no data of this kind," he says.

But he adds that the magnitude of the improvement was a disappointment, and that there were signs that the effects of treatment were diminishing over time.

And although the therapy benefited communication skills and decreased repetitive behaviours, it did not lessen childrens' anxiety — another key symptom of autism. “Perhaps most of all, this underscores how desperately important it is that we develop higher-impact interventions,” he says.

More than 1% of US children are diagnosed with autism spectrum disorder, a condition in which their ability to communicate is impaired. There is no treatment that has been definitively shown to address the core symptoms of autism, says Green.

The idea behind early intervention therapies for autism is that they stand a greater chance of having an impact because symptoms are not as severe and the brain is at an earlier stage of development. Green and his colleagues launched the Preschool Autism Communication Trial (PACT) to test those assumptions. They enrolled 152 children with autism, many of them with severe symptoms of the disorder. About half of the children were randomly assigned to receive an intervention; the other half served as a control. The two groups began the study with similar scores on a measure of autism symptom severity.

The therapy, however, was aimed at their parents. Training was tailored to each family: twice a month for six months, parents watched videos of their interactions with their children. A therapist paused the video periodically to discuss methods that parents could use to better engage their children and bolster their communication skills. The parents received more support sessions for the next six months, and agreed to do about half an hour of planned activities with their children each day throughout the year. After that, the therapy sessions stopped.

At the end of that treatment, the children who received the treatment had less-severe symptoms of autism. And six years later, the follow-up with 121 of the original study participants showed that the effects of that therapy were still evident. On a scale that indicates autism severity, scores were lower in children whose families had received the training: 7.3 versus 7.8 in children who had not received the intervention. Among those in the intervention group, 46% were considered to have “severe” autism. That proportion was 63% in the untreated children.

The data are sufficient to support wider use of similar interventions, says Green. “We think this could be and should be part of an overall provision for children with autism.”