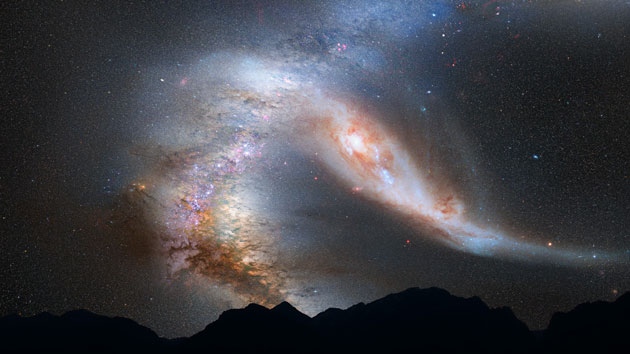 Four billion years from now, the Milky Way, as seen from Earth in this illustration, would be warped by a collision with the Andromeda galaxy.

It’s a definite hit. The Andromeda galaxy will collide with the Milky Way about 4 billion years from now, astronomers announced today. Although the Sun and other stars will remain intact, the titanic tumult is likely to shove the Solar System to the outskirts of the merged galaxies.

Researchers came to that conclusion after using the Hubble Space Telescope between 2002 and 2010 to painstakingly track the motion of Andromeda as it inched along the sky. Andromeda, roughly 770,000 parsecs (2.5 million light years) away, is the nearest large spiral galaxy to the Milky Way.

Roeland van der Marel and Sangmo Tony Sohn, astronomers at the Space Telescope Science Institute in Baltimore, Maryland, announced the findings today at a NASA press briefing in Washington DC. The results will be reported in an upcoming issue of Astrophysical Journal1–3.

“We’ve been able to extract dynamical information about Andromeda that has been hidden from astronomers for a century,” says van der Marel.

For decades, scientists have known that Andromeda is falling towards our home Galaxy at a rate of 110 kilometres per second and that the two might eventually collide as a result of their mutual gravity. But because astronomers could easily measure Andromeda’s velocity only along the line of sight to Earth, no one could be sure whether the future encounter would constitute a major merger, a near-miss or a glancing blow.

Hubble’s visual acuity in recording the transverse or sideways motion of 15,000 stars in different parts of Andromeda has now provided the missing components of the galaxy’s motion. In determining that the overall sideways velocity of Andromeda is much smaller than its line-of-sight speed, van der Marel and his colleagues have shown that a merger of Andromeda and the Milky Way is inevitable. Four billion years from now, the two galaxies will pass through each other and, 2 billion years after that, they will fall back in a permanent embrace to form a single galaxy, the team’s simulations show.

The detection is “impressive”, says Jeremy Darling, an astronomer at the University of Colorado in Boulder. “It is just at the limit of what can be done.”

The measurement is also key in understanding the evolution of a collection of nearby galaxies known as the Local Group, among which Andromeda and Milky Way are the most massive. Darling says that the new Hubble data allow simulations to “run time forward or backward” to learn about the future and the past of the Local Group.

The team’s simulations had to account for the Sun’s motion as well as the gravity of a satellite galaxy of Andromeda called M33, which the researchers say has a 9% chance of plowing into the Milky Way before Andromeda does.

The Milky Way–Andromeda collision will almost certainly move the Sun outwards from its current position 8,000 parsecs (26,000 light years) away from the Galactic centre. The simulations show a 10% chance that the Solar System will be exiled to a Galactic Siberia, more than 50,000 parsecs (160,000 light years) from the centre of the merged bodies.

Darling and his colleagues are now measuring Andromeda’s sideways motion in another way, tracking the position of a collection of water masers that he discovered in the galaxy4. These objects are regions of radio-bright emission associated with star formation. In about two years, he says, he and his team expect to obtain an even more precise value than Hubble's for the sideways motion.