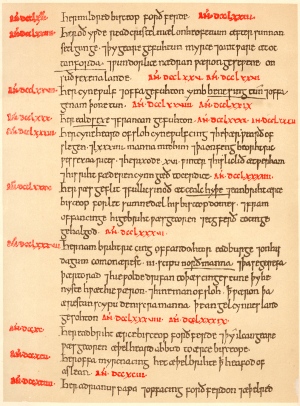 An eerie "red crucifix" seen in Britain's evening sky in ad 774 may be a previously unrecognized supernova explosion — and could explain a mysterious spike in carbon-14 levels in that year's growth rings in Japanese cedar trees. The link is suggested today in a Nature Correspondence by a US undergraduate student with a broad interdisciplinary background and a curious mind1.

A few weeks ago, Jonathon Allen, a biochemistry major at the University of California, Santa Cruz, was listening to the Nature podcast when he heard about a team of researchers in Japan who had found an odd spike in carbon-14 levels in tree rings. The spike probably came from a burst of high-energy radiation striking the upper atmosphere, increasing the rate at which carbon-14 is formed (see 'Mysterious radiation burst recorded in tree rings').

But there was a problem: the only known causes of such radiation are supernova explosions or gigantic solar flares, and the researchers knew of no such events in ad 774 or 775, the dates indicated by the tree rings.

Intrigued, Allen hit the Internet. "I just did a quick Google search," he says.

His long-standing interest in history was helpful, he notes. "I knew that going that far back, there's very limited written history," he says. "The only things I'd ever seen or heard of were religious texts and 'chronicles' that listed kings and queens, wars and things of that nature."

His search found the eighth-century entries in the Anglo-Saxon Chronicle at the Avalon Project, an online library of historical and legal documents hosted by Yale University in New Haven, Connecticut. Scrolling down to the year ad 774, Allen found a reference to a "red crucifix" that appeared in the heavens "after sunset".

Hidden in the heavens

"It made me think it's some sort of stellar event," Allen says. Furthermore, he notes, the redness might indicate that the source was hidden behind a dust cloud dense enough to scatter all but a small amount of red light. Such a cloud might also prevent any remnants of the proposed supernova being seen by modern astronomers.

Jonathon Allen discusses his discovery with the Nature podcast team.

Scientists in the field are impressed. Geza Gyuk, an astronomer at Chicago's Adler Planetarium in Illinois, who has used the Anglo-Saxon Chronicle to investigate past astronomical events, says that Allen might be on to something. "The wording suggests that the object was seen in the western skies shortly after sunset," he says. "That would mean that it would have moved behind the Sun [where it could not be seen] as Earth orbited the Sun. That, along with the dimness of the 'new star' due to dust would go a long way to explaining why no one else would have seen or recorded the event."

Nevertheless, says Donald Olson, a physicist with an interest in historical astronomy at Texas State University in San Marcos, "Early chronicles can be difficult to interpret in an unambiguous way."

As far back as 1870, he says, John Jeremiah published an article in Nature that referred to the same wording from the Anglo-Saxon Chronicle. Jeremiah proposed then that it might have been an early description of the Northern Lights2.

"Another possible explanation could be an ice-crystal display," adds Olson, noting that the red "crucifix" could have been formed by sunset light illuminating high-altitude ice particles in both vertical and horizontal bands of light.