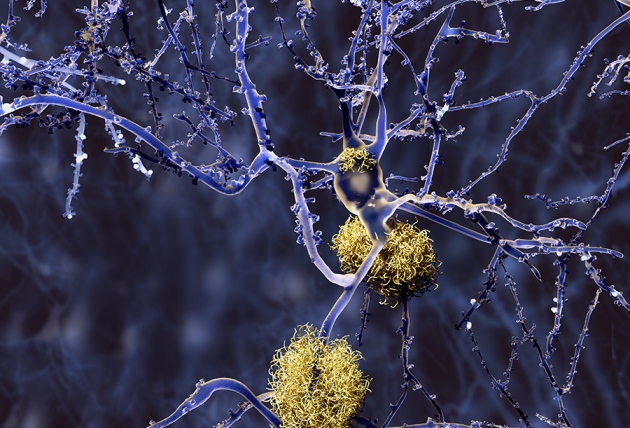 Amyloid plaque build-up (yellow) in the brain is a characteristic of Alzheimer's disease.

A drug called aducanumab might remove the toxic proteins thought to trigger Alzheimer’s disease from the brain, suggests findings from a small clinical trial.

The results, reported on 31 August in Nature1, showed that aducanumab broke up amyloid-β proteins in patients with early-stage Alzheimer’s disease. The trial mainly tested the safety of the drug in people, and so the final word on whether aducanumab works to ameliorate the memory and cognitive losses associated with Alzheimer’s will have to wait until the completion of two larger phase III trials.  They are now in progress, and planned to run until at least 2020.

The latest study involved 165 people split into different groups, some of which received the drug and one which received a placebo. In the group receiving infusions of aducanumab, 103 patients given the drug once a month for up to 54 weeks experienced a reduction in the amount of tangled amyloid-β in their brains. These results echoed the findings of a pretrial mouse study — reported in the same paper1 — in which the drug seemed to clear amyloid-β plaques from the animals’ brains.

“This drug had a more profound effect in reversing amyloid-plaque burden than we have seen to date,” says psychiatrist Eric Reiman, executive director of the Banner Alzheimer’s Institute in Phoenix, Arizona, who is testing other approaches for Alzheimer’s prevention and treatment. “That is a very striking and encouraging finding and a major advance.” Reiman wrote a commentary accompanying the article.

“This is the best news we’ve had in my 25 years of doing Alzheimer’s research, and it brings hope to patients and families affected by the disease,” says neurologist Stephen Salloway of Butler Hospital in Providence, Rhode Island, who was on the team that ran the trial.

Patients in the groups that got the drug were given one of four different doses of aducanumab. Individuals who received the highest doses also saw the highest reductions in plaques. And a group of 91 patients treated for 54 weeks saw slower cognitive declines than did those who received placebo infusions.

Scientists have debated for years whether the build-up of amyloid-β causes the memory loss and other symptoms of Alzheimer’s. This trial is a point in favour of the “amyloid hypothesis”, which suggests that elimination of the protein itself might alleviate the disease’s symptoms.

Still, Reiman cautions, the trial is too small to prove that the drug actually works. Numerous other Alzheimer’s drugs have looked promising in early-stage trials, yet ended in failure, and even in the deaths of patients.

Aducanumab led to abnormalities on brain-imaging scans in less than one-third of the patients. But researchers closely monitor such anomalies in Alzheimer’s trials, because some participants in previous Alzheimer’s antibody trials have died as a result of brain inflammation.

All of the reported imaging abnormalities eventually disappeared in about 4 to 12 weeks, and no patients were hospitalized. Some people with imaging anomalies continued to take the drug despite these side effects. Patients who received higher doses of the drug, or who had genetic risk factors for Alzheimer’s, were more likely to develop the brain anomalies.

Biogen — the company that makes aducanumab — has adjusted the drug’s dosage and the monitoring schedule for people with genetic risk for Alzheimer’s in its phase 3 trials. Reiman says that the drugmakers will need to determine whether there is a dosage that hits a “sweet spot” at which it is strong enough to work without causing potentially lethal brain inflammation.

Aducanumab is a bright spot in the field of Alzheimer’s therapeutics after years of failed antibody and other types of drug trials. The antibody drug solanezumab failed to slow cognitive decline in two large 2013 clinical trials, but is currently being tested in multiple other trials. One includes individuals with mild Alzheimer’s disease, and could report results as early as the end of this year.

Other therapeutic strategies undergoing clinical trials include targeting enzymes called β-secretase 1, involved in processing amyloid proteins; targeting antibodies to attack a form of amyloid protein — the “pyroglutamate” form — found in plaques; and targeting a protein called tau that also seems to be implicated in the disease.

“The fact that we now have an antibody that gets into the brain sufficiently enough to engage its target and remove plaques is an important development, and we look forward to seeing results from this and other phase 3 trials,” Reiman says.