As the number of biomedical research papers continues its relentless growth, the quality and credibility of science is buckling under the weight of all the data. That is the conclusion of an article in the journal eLife1 that triggered discussion online this week. The piece, which is based on interviews with 20 anonymous US senior scientists, suggests a radical rethinking of the peer-review system to deal with the ‘overflow’ of data. Erik Müllers, a cell biologist at the Karolinska Institute in Stockholm, summed up the issue on Twitter: 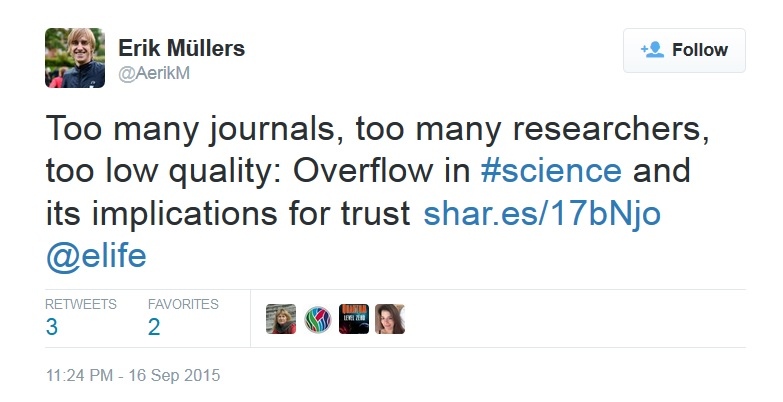 But not everyone was on board. Savraj Grewal, a cell biologist at the University of Calgary in Canada, tweeted: 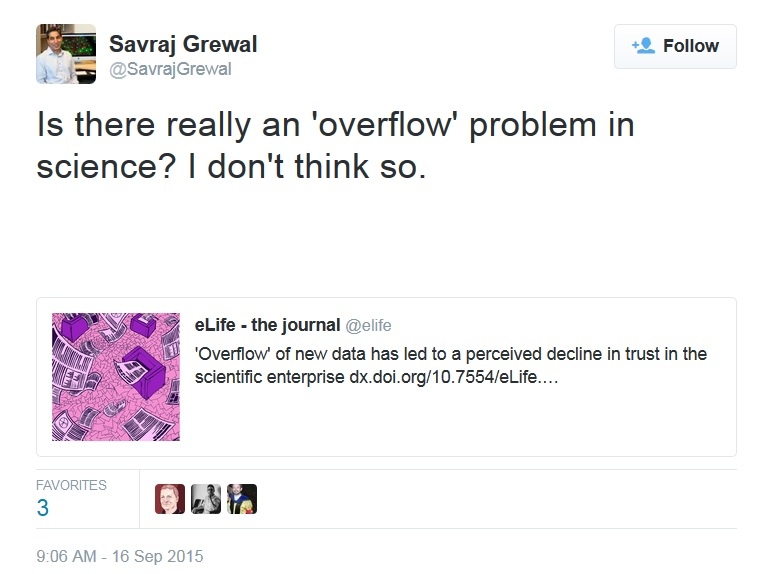 Robert Insall, a cell biologist at the University of Glasgow, UK, had been thinking about science’s image problems and his burgeoning workload. So he and his co-authors asked the 20 researchers — all principal investigators with 20–60 years of experience in basic biomedical research — whether they had noticed a decline in the ‘trustworthiness’ of science in their fields and, if so, what steps should be taken to regain that trust. Insall says that he expected to hear grumblings about dishonesty and fraud, but what he got instead were many complaints about the sheer volume of modern research.

For example, one respondent said: “There’s this proliferation of journals, a huge number of journals … and I tend not even to pay much attention to the work in some of these journals.” Another pointed to the expansion of data in individual articles, suggesting that a single figure from a current issue of Cell could have warranted an entire paper in the 1970s. The scientist said that modern articles contain “easily 5 times and probably 10 or 20 times more data than there was in the past”.

The result, according to the eLife article, is that the supply of qualified peer reviewers cannot possibly keep up with increasing demand, and that this is allowing low-quality or irreproducible science to slip into the literature. “With too many papers and not enough trustworthy reviewers, the peer-review system is getting stretched thinner and thinner, and we fear it will snap,” says Insall.

Grewal is sceptical that high volumes of data are threatening science’s credibility. “I don’t think science is any less trustworthy than it ever has been before,” he said in an interview. He also suspects that the small group of senior researchers interviewed may not represent scientists as a whole. “If you talked to junior scientists, overflow may not be their top concern,” he says.

Jim Woodgett, a stem-cell researcher at the Lunenfeld–Tanenbaum Research Institute in Toronto, Canada, tweeted that “there is an information deluge everywhere you look but I don’t think peer review is failing, it’s evolving”. Reached for comment, Woodgett says that “reviewer fatigue” is a real concern as research output grows, but he adds that the growth in research is not new, and it includes an increase in “fantastic research of high-quality”.

Insall and his co-authors propose a few solutions, including scaling back formal peer review for some papers so that reviewers can spend more time on papers with higher impact. Insall stresses that he is not calling for any sort of limit on scientific output. Science just needs a better system of quality control: “We want to save peer review, not get rid of it,” he says.