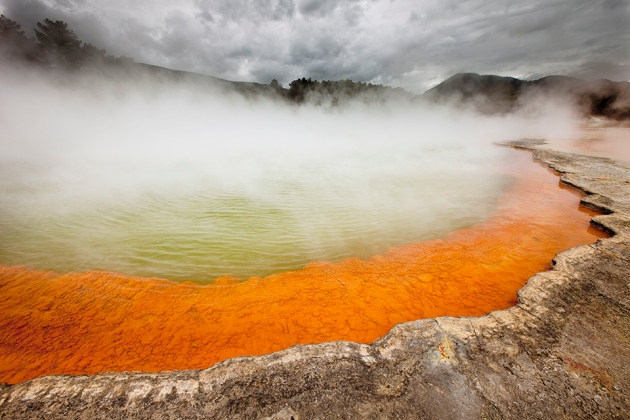 Champagne Pool is a lake in Rotorua, one of New Zealand’s most active volcanic regions.

Geologists in New Zealand have discovered a magma chamber being born in a surprising place — not under the country’s most active volcanoes, but off to one side.

The finding suggests that molten rock can accumulate underground in complex and unexpected patterns, but does not indicate that an eruption is imminent.

“There’s no need to panic, but chances are there are lots of bodies of magma dotted throughout the crust,” says Ian Hamling, a geophysicist at GNS Science in Lower Hutt, New Zealand. He and his colleagues describe the discovery on 3 June in Science Advances1.

The team used radar data from satellites, such as the European Space Agency’s now-defunct Envisat, to study ground motions in the Taupo Volcanic Zone. This region, which runs down the centre of New Zealand’s North Island, has seen 25 enormous eruptions in the past 1.6 million years. Today, it is home to some of the country’s most spectacular volcanic features, from the bubbling hot pots of Rotorua to frequent eruptions at Whakaari, or White Island, in the Bay of Plenty off of the North Island. The most recent eruption at Whakaari was in April.

A 2015 study2 found that much of the main Taupo Volcanic Zone was subsiding, or sinking, as is expected after magma erupts and drains from an underground chamber. But one area, to the north and west along the Bay of Plenty coast, seemed to be rising. “I just discounted it at the time, because we were so focused on looking at the more volcanic part,” says Hamling.

Later, the team took a closer look, taking in data from global-positioning stations as well as geodetic surveys dating back to the 1950s. They found that the ground had risen by 5 millimetres per year in the 1950s, but that rate had more than doubled to about 12 millimetres a year starting in the mid-2000s. It has since dropped back to the lower rate.

Calculations suggest that about 9 million cubic metres of magma — 3,600 Olympic swimming pools’ worth — pushed into the crust each year during peak growth. The molten rock would have gathered in a chamber about 10 kilometres below the surface. “When you compare it to other places, like Yellowstone, we’re smaller than that,” Hamling says. “But it’s still pretty significant.”

The city of Tauranga, with more than 100,000 residents, lies about 50 kilometres west of the uplift. Elaine Smid, a volcanologist at the University of Auckland, notes that people in the area are already at risk from volcanic hazards, especially ashfall from the Taupo volcanoes.

It’s unclear whether the oddball magma chamber will pose an extra risk. There has been no increase in volcanic activity in the northern Taupo region. And the uplift may not necessarily be related to magma at all, says Nico Fournier, a volcanologist with GNS Science, based out of the town of Taupo. Some other geologic process may be at work.

The study is not the first to suggest that magma is pushing into Earth’s crust somewhere other than under an active volcano. Examples have also been found in the central Andes, says Matthew Pritchard, a geophysicist at Cornell University in Ithaca, New York. He calls them “zombie volcanoes” — because they show signs of life when they should be dead.

“Not to be too glib, but we are not undergoing a zombie-volcano invasion,” he says. Rather, the magma chambers are being found now because the sharp vision of radar satellites has improved scientists’ view of ground movements.

Hamling’s team wants to do a more detailed study of the Bay of Plenty area, using a range of techniques to probe the size and shape of the magma chamber.