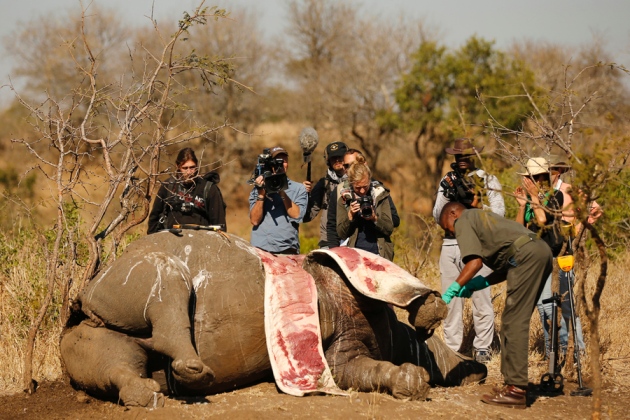 Photo-journalists watch as a ranger performs a post mortem on a rhino killed for its horn by poachers at the Kruger National Park in South Africa.

TREND WATCH: At least 1,312 rhinoceros were illegally killed in Africa in 2015 — a record high for the continent, according to figures from TRAFFIC, a wildlife-trade monitoring network based in Cambridge, UK.

South Africa, which has the largest share of this poaching, reported a small decrease on 21 January — from 1,215 rhinos in 2014 to 1,175 in 2015. But that was more than offset by rises in illegal killing in neighbouring countries (see ‘African rhino poaching on the rise’). 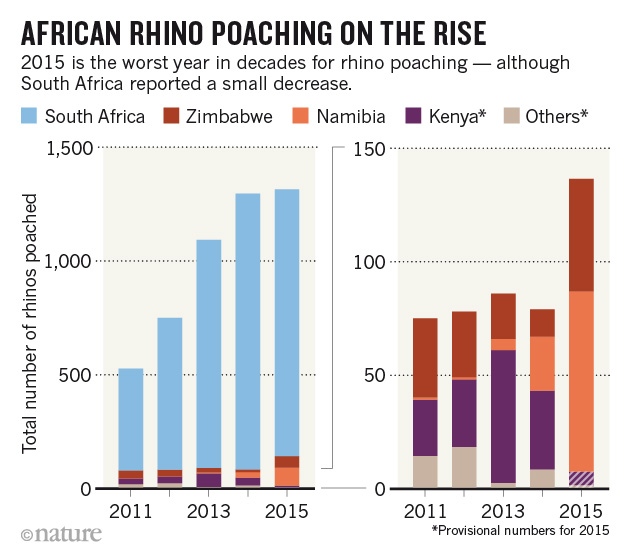 “For Africa as a whole, this is the worst year in decades for rhino poaching,” said Tom Milliken, a rhino expert with TRAFFIC, in a statement released to the media. “The poaching epicentre has spread to neighbouring Namibia and Zimbabwe, but is nowhere near being extinguished in South Africa: despite some commendable efforts being made, we’re still a very long way from seeing the light at the end of this very dark tunnel.”

Rhino conservation measures will be under discussion at the 17th meeting of CITES, the Convention on International Trade in Endangered Species of Wild Fauna and Flora, which will be held in September in Johannesburg, South Africa.