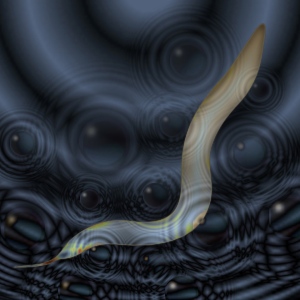 Neuroscientists have used ultrasound to stimulate individual brain cells in a worm, and hope that the technique — which they call ‘sonogenetics’ — might be adapted to switch on neurons in mice and larger animals.

The technique relies on touch-sensitive ‘channel’ proteins, which can be added to particular brain cells through genetic engineering. The channels open when hit by an ultrasonic pulse, which allows ions to flood into a neuron and so causes it to turn on.

Ultrasound could be a less-invasive way for researchers to stimulate specific cell types or individual neurons, rather than using implanted electrodes or fibre-optic cables, says neurobiologist Sreekanth Chalasani, at the Salk Institute for Biological Studies in La Jolla, California, who led the study reported today in Nature Communications1.

“Our hope is to create a toolbox of different channels that would each respond to different intensities of ultrasound,” he says.

"It's a cool new idea, and they show that this could really be feasible," says Jon Pierce-Shimomura, a neuroscientist who studies the nematode Caenorhabditis elegans at the University of Texas at Austin. “This could open a whole new way for manipulating the nervous system non-invasively through genetically encodable tools.”

Light up a cell

The research follows in the footsteps of optogenetics, a popular, decade-old technique in which neurons are genetically engineered so that they can be activated by light. Optogenetics relies on inserting light-sensitive channel proteins into neurons. When hit by the correct colour of light, often sent into the brain via a fibre-optic cable, the channels open, allowing ions to flood in.

Sonogenetics will not replace optogenetics, says William Tyler, a neuroengineer who specializes in ultrasonic brain stimulation at Arizona State University in Tempe. “But with this paper, there's one more tool on the block,” he says.

Ultrasound has long been used for medical applications. Low-intensity waves help doctors to monitor fetuses or heart function. And high-intensity ultrasonic pulses can be used to heat and destroy certain diseased tissues. In recent years, says Tyler, researchers have taken a growing interest in the use of ultrasound as a non-invasive way to stimulate brains and nerves, in both animals and humans. He and his team published one of the first reports of ultrasonic brain stimulation in humans2 in 2014.

But whereas previous work stimulated particular regions of the brain, sonogenetics shows that it is possible to target a specific cell type or an individual neuron, says Chalasani. His team found that the ion channel TRP-4 plays a key role in helping the worm sense ultrasonic vibrations, and could be manipulated to dramatic effect.

Since ultrasound does not travel well through air, the researchers first put worms on a petri dish partially submerged in a water bath. They sent a short burst of ultrasound into the dish, and amplified the low-pressure waves by adding microscopic lipid bubbles onto the petri dish's surface that resonated with the vibrations.

By adding the TRP-4 protein into neurons with different functions, the researchers were able to make free-crawling worms reverse direction, stop reversing, or make more frequent sharp turns in response to a brief pulse of low-pressure ultrasound.

Ultimately, Chalasani hopes that the technique can be used in other animals. The team is preparing to test its system in mice, though these do not naturally produce the TRP-4 channel, so it is not clear how the protein will behave, or whether other ion channels could work better.

In the worm, Chalasani's team saw hints that at least one other ion channel is tuned to ultrasound waves of a pressure slightly higher than that used for most of the study. This opens the possibility that different ion channels could be selected or even engineered for customized applications, he says.

Even if sonogenetics becomes widely used in basic research, translation into humans may still be limited by the challenges of genetically manipulating ion-channel expression in people, Chalasani notes. “That's a big question for both optogenetics and sonogenetics: 'How do you deliver this channel safely to the cell or cell type you're interested in?'”

But Tyler wonders whether invasive genetic manipulations might not be necessary to utilize the principles behind sonogenetics in humans. It could be that different neuron types — because of their differing channel proteins and physical structure — are intrinsically sensitive to, and thus controllable by, different ultrasound pulse sequences, regardless of whether they can be genetically engineered.

“That's a really fascinating possibility, and this paper opens that up,” he says.