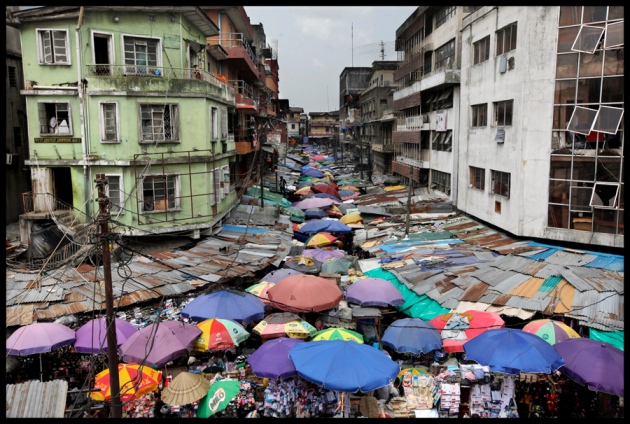 A street market in Lagos, Nigeria's and Africa's largest city. Global trends towards lower birthrates have not yet caught on in Nigeria, which could become the world's most populous country by century's end.

Many African countries are bucking a global trend of having fewer babies and will continue to grow throughout the twenty-first century, a study suggests. The authors say that world population could top 12 billion by 2100, contradicting earlier predictions that it would peak at no more than 10 billion by mid-century.

Although Africa now has a smaller population than India alone, by the end of the century it will almost have caught up with Asia as the most populated continent, researchers report on 18 September in Science1.

In most parts of Asia, Europe and the Americas fertility rates — the average number of children women give birth to throughout their lives — have dropped in the past few decades to 1.5–2. Ageing nations such as Germany and Japan are facing severe economic and social-welfare challenges, as expenses such as pensions and health care eat up an ever larger proportion of funds. Low birth rates are beginning to raise concerns even in countries that until not long ago had high fertility rates, such as Turkey and Iran.

Many demographers expected that similar trends would catch on in Africa, but the fertility rate in sub-Saharan Africa is still at 4.6, in part because of a lack of access to contraceptives.

Still, a 2001 study found an 85% probability that the world population would peak before the end of the century and then start a slow descent2.

More recently, projections of world population by the United Nations have spanned a wide range of scenarios. These include a 'medium' projection based on the current and expected global fertility rate, and higher and lower estimates that take into account the uncertainty in that fertility rate by adding or subtracting 'half a child' per woman.

The resulting projections had a huge range — from 7 billion people to more than 16 billion people by 2100, in the UN’s most recent World Population Prospects, released in 2012. Moreover, says Patrick Gerland, a demographer with the UN’s population division in New York and lead author of the new study, while that approach has been useful to ask 'what-if' questions, it did not enable researchers to quantify the probability of different outcomes.

The latest study employed a statistical approach. The authors started from UN data released this year that break down several decades' worth of fertility rates country by country — rather than giving a global average. They then extrapolated those local rates to the future.

“The UN’s traditional high and low scenarios no doubt overstated uncertainty about global population dynamics,” says Adrian Raftery, a statistician at the University of Washington in Seattle and a co-author of the study. “But quite some uncertainty does still remain with regards to future birth rates, in particular in high-fertility countries in the developing world.”

A. Raftery / Univ. of Washington

Taking into account the varying uncertainties makes a difference, the authors of the Science paper note. While in developed countries the fertility rate is unlikely to deviate much from the 1.5–2 range, in certain African countries it is much less predictable and could range anywhere from less than 3 to more than 6. Moreover, the current population in developing countries is much younger than that of many developed countries, and thus has many more people who are likely to be around — and have children — for a longer time. This adds to the uncertainty about the populations' future growth.

The method in the latest study “is an advance, no doubt”, says Wolfgang Lutz, who led the 2001 work that predicted a mid-century peak and is the director of the World Population Program at the International Institute for Applied Systems Analysis in Laxenburg, Austria. “It would be desirable that probabilistic approaches become the rule in population studies, as they long have in weather forecasting.”

Raftery and his colleagues project that Africa’s population will at least triple by 2100, reaching 3.1 billion and possibly as high as 5.7 billion (see chart below). The population of Nigeria, currently 160 million people, could rise to 1.5 billion and overtake China as the world’s most populous nation, says Raftery.

A. Raftery / Univ. of Washington

Asia's population will probably peak and then decline, while Africa's growth will continue unabated, the study predicts. (Click to enlarge.)

“Some environmentalists may dream of a world with no more than 8 billion — but this will not happen,” says Hans Rosling, a public-health expert at the Karolinska Institute in Stockholm. “We need to plan for at least 11 billion people, and we need take appropriate action: Fighting poverty and providing education and contraceptives to those who lack them are the most effective measures to control population growth.”

Ending extreme poverty will make family planning more acceptable in all cultures, says Rosling. “There’s no need to talk about a population bomb,” he says. “Give poor families a decent life, and fast population growth will soon be over.”