Scientists generally welcome scrutiny of their data, but question their approach to word processing and sparks fly. A study1 suggesting that Microsoft Word is superior to LaTeX (a typesetting system commonly used by researchers) when it comes to efficiently creating academic documents has generated uproar online. Ben Lillie, a particle physicist who now directs The Story Collider, a series of science-storytelling podcasts and live shows, tweeted: 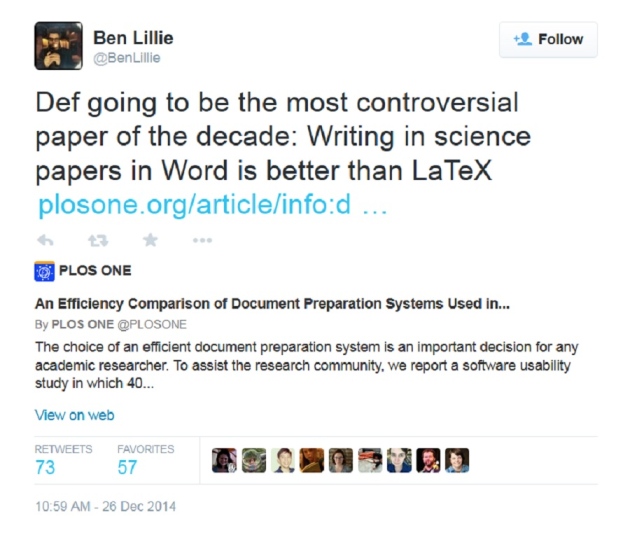 Indeed, many disagreed with the paper’s finding. Steven Gibbons, a geophysicist at NORSAR, a geosciences research foundation in Kjeller, Norway, tweeted: 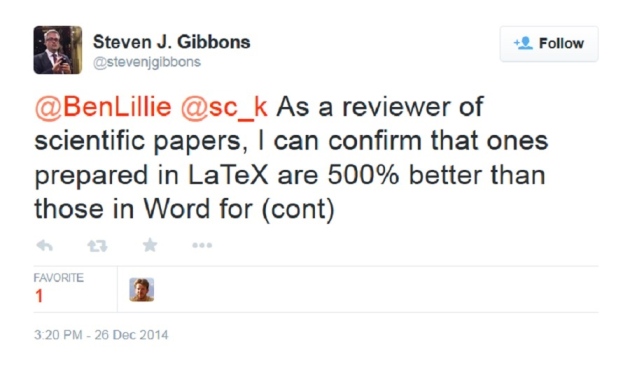 For the study, published in PLoS ONE, 40 German scientists with varying degrees of word-processing expertise were each given 30 minutes to replicate three pages of a journal article — a mixture of continuous text, equations and a table — using either Word or LaTeX. Word users reproduced more of the text and table with fewer errors than the LaTeX users. The groups were roughly equally successful at copying equations. The authors conclude that “on most measures, expert LaTeX users performed even worse than novice Word users.” 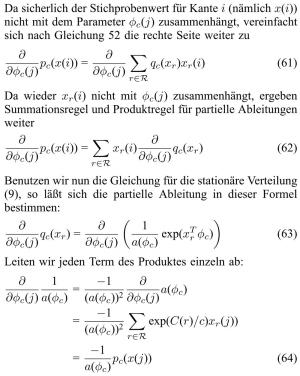 Volunteers in a PLoS ONE study were asked to reproduce these equations and other content using Microsoft Word and LaTeX.

Claus Wilke, a computational biologist at the University of Texas in Austin, took serious issue with the paper’s methodology as well as the conclusions. “In my mind, this paper makes extremely strong claims based on a rather flawed and thin analysis,” he wrote on his Serial Mentor blog. The method of comparison, he wrote, was “entirely artificial and rigged to favor MS Word”. For example, Word is designed to allow users to easily create and edit the visual layout of an article — something that is not a strength of LaTeX, he explained.

Speaking to Nature, lead author Markus Knauff, an experimental psychologist at the University of Giessen in Germany, acknowledges that copying three pages of a journal article doesn’t mimic the process of actually writing a scientific paper, but says that there was no other way to directly evaluate the two software systems. “The intention of our study was to compare the efficiency of LaTeX and Word as text-preparation tools,” he says. Having researchers create their own text would hopelessly muddle the analysis with extra variables, he explains. He adds that the sample text used for the study contained elements that are found in a wide range of scientific articles, making it a good representation of real-life writing.

In an interview, Gibbons said that he always uses LaTeX when he has the choice because it automatically numbers and sorts equations, figures and tables. It also creates a bibliography of all cited papers. He says that he recently reviewed a manuscript written in Word that listed papers in the bibliography that weren’t cited in the text and vice versa. “I spent a huge amount of time — unpaid — tracking down these errors,” he says. “With LaTeX, you need to reach a certain level of efficiency to do anything at all. But once you’re there, everything becomes far more efficient.”

Some, however, came down on the side of Word. Angie Pendergrass, an atmospheric scientist at the US National Center for Atmospheric Research in Boulder, Colorado, who tweeted a link to the PLoS ONE paper, says that it reinforced her own experiences with creating scientific documents. “I produce a lot of spelling and grammatical errors in LaTeX that would have been caught in Word,” she says. Also, she says, the code required to write in LaTeX can be especially cumbersome when multiple authors are working on the same paper. With the ‘track changes’ function on Word, she says, she has been able to collaborate on edits with “a reasonably small number of headaches”.

The Word versus LaTeX debate may become less heated — and less relevant — as other editing tools gain prominence. In his blog post, Wilke noted that he increasingly uses Markdown, a simplified formatting language that creates documents that can be easily converted to HTML or PDFs. “I bet that if the comparison in the PLOS ONE paper had been MS Word vs. LaTeX vs. Markdown, Markdown would have won hands down,” he wrote.