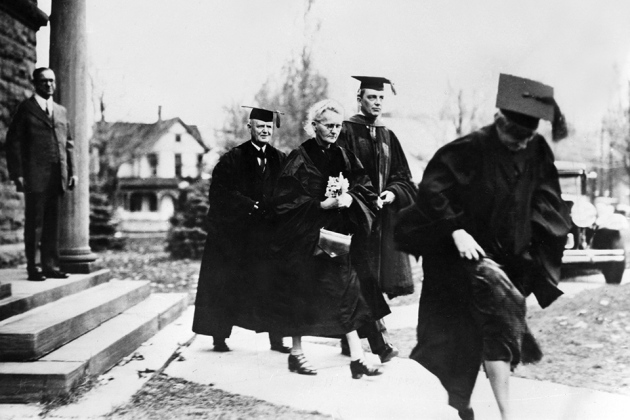 Physics still has a long way to go when it comes to the representation of women in their ranks.

There are more women in the sciences than ever before. They hold leading faculty and administrative positions while their representation in fields such as biology, sociology and psychology has increased. Yet the physical sciences are woefully behind when it comes to the number of women at all levels.

This persistent problem prompted a special issue of the journal Physical Review Physics Education Research, with 17 papers and an editorial on gender issues in physics, published on 1 August. Brewe was one of two guest editors for the issue.

Recent scandals involving sexual harassment in astrophysics departments at US universities and allegations of gender segregation in an undergraduate physics class in Ohio have underscored the issues that women continue to face in the physical sciences.

The special issue addresses the reasons why relatively few women enter the field of physics, as well as the factors that deter them from completing their degrees. They include a lack of role models, entrenched stereotypes and an undervaluing of their abilities. Many authors also highlighted the fact that women are — usually inadvertently — made to feel like they don’t fit in1.

Women comprise between 49% and 58% of undergraduates and graduates in the social and life sciences at US universities. By contrast, only about 20% of US undergraduate and graduate students in physics are women, according to the US National Science Foundation. That gap has persisted over the past decade.

“Women in physics don’t have a lot of role models,” says Paula Stephan, an economist at Georgia State University in Atlanta. About 8% of US universities with PhD-granting departments don’t have any women on their physics faculty. At the rest, only an average of 11% of the professors are women, according to the American Institute of Physics (AIP).

But departments with more women faculty members benefit both male and female students, Stephan says. More diverse departments tend to be more productive, as measured by the number of publications, she says. They also tend to have better policies that address work–life balance, according to the American Association of University Women. 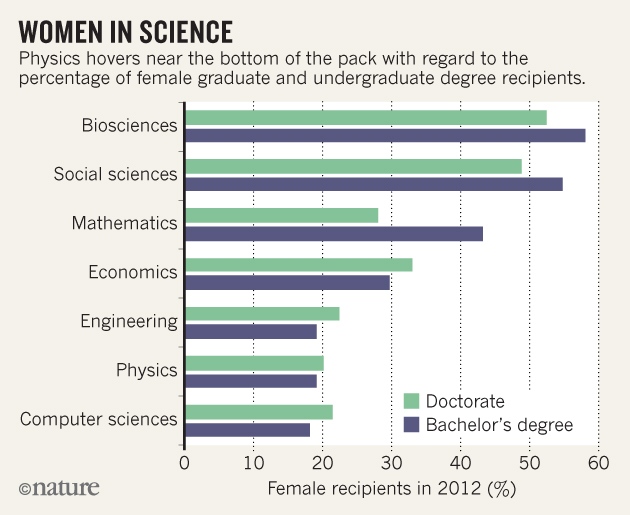 Stereotypes pose another obstacle, says Sarah Eddy, a biologist at the University of Texas at Austin, who co-authored a paper in the special issue2. Most of the scientists that people see on television or in films are men — although the Ghostbusters reboot is a notable exception. This contributes to the stereotypical association between science and maleness.

Eddy has found that male students underestimate their female peers’ knowledge3. When women feel like they’re being judged because of their gender, it affects their performance, their feeling of belonging and their interest in science. “We’ve got these unconscious biases from cultural influences since we were kids,” she says.

It’s not just their peers, however. Female undergraduates underrate their own abilities in mathematics, eroding their self-confidence and increasing their anxiety while studying physics, says Linda Sax, an education researcher at the University of California, Los Angeles.

Women also tend to want their studies to meet communal or “social activist” goals of working with people and making the world a better place, according to a paper that Sax co-authored4. However, undergraduates often view physics as an abstract field that has little direct application to the real world. Women at universities report stronger social activist goals than men do, but physics consistently attracts students who place less value on such goals. “We need to make the work more relevant to students’ lives,” Sax says.

These hurdles remain in graduate school, contributing to more women leaving physics at the PhD level. Other factors that discourage female doctoral students include their relationships with their advisers and the ‘two-body problem’ — the struggle for couples in academia to find positions in the same place5. The later often results in people limiting their careers or leaving physics, says Rachel Ivie, head of the Statistical Research Center at AIP in College Park, Maryland, a study co-author in the special issue. And women are more affected by this than men, she says.

Addressing these problems means significant changes at the university level, argues Ramón Barthelemy, AAAS Science Policy Fellow in Washington DC, who co-authored several studies in the special issue. Those changes could include an explicit code of conduct at conferences, striving for more diverse faculty and updating mentoring and teaching styles.

There is reason for hope, however. “More and more people are paying attention and getting passionate about these issues,” says Eddy.