A vast project to map neural connections in the mouse retina may have answered the long-standing question of how the eyes detect motion. With the help of volunteers who played an online brain-mapping game, researchers showed that pairs of neurons positioned along a given direction together cause a third neuron to fire in response to images moving in the same direction.

It is sometimes said that we see with the brain rather than the eyes, but this is not entirely true. People can only make sense of visual information once it has been interpreted by the brain, but some of this information is processed partly by neurons in the retina. In particular, 50 years ago researchers discovered that the mammalian retina is sensitive to the direction and speed of moving images1. This showed that motion perception begins in the retina, but researchers struggled to explain how.

When light enters the eye, it is captured by photoreceptor cells, which convert the information into electrical impulses and transmit them to deeper layers of the retina. Individual photoreceptors are not sensitive to the direction in which an object may be moving, so neuroscientist Jinseop Kim, of the Massachusetts Institute of Technology (MIT) in Cambridge, and his colleagues wanted to test whether the answer to the puzzle could lie in the way various types of cells in the retina are connected.

Photoreceptors relay their signals via ‘bipolar neurons’, named this way because they have two stems that jut out of the cell's body in opposite directions. The signal then transits through ‘starburst amacrine cells’ — which have filaments, or dendrites, that extend in all directions similarly to light rays out of a star — before reaching the cells that form the optic nerve, which relays them into the brain. 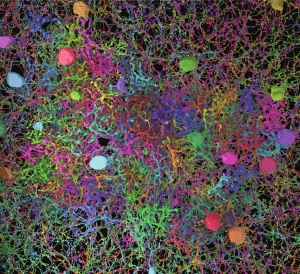 A three-dimensional reconstruction of several neuron types and their interconnections in the mouse retina.

To understand how bipolar and starburst cells are wired together, Kim and his colleagues analysed high-resolution electron microscope images of a mouse retina with the help of nearly 2,200 members of EyeWire, an online ‘citizen-science’ game set up to help with brain-mapping efforts (see 'Computer science: The learning machines'). Players traced the pathways through the layers of cells to create a high-resolution wiring diagram of part of the retina.

The reconstructed map, described today in Nature2, showed that while one type of bipolar cell connects to the amacrine cells' filaments close to the cell body, another does do so farther away along the length of the filaments. And crucially, the bipolar cells that connect closer to the starburst amacrine cell bodies are known to relay their messages with a time delay3, whereas the others transmit their immediately.

Because of the lag in the first type of connection, signals that hit two nearby locations on the retina at two slightly different times — as would happen when an object moves across the visual field — could reach the same amacrine-cell filament at the same time. This could explain how the retina detects motion, the authors suggest: The amacrine cell might fire only when it receives this combined information, signalling that something is moving in the direction of the filament. Stimuli not moving in the direction of the filament will produce impulses that reach the amacrine cell at different times, so that it will not fire.

Sebastian Seung, a computational neuroscientist now at Princeton University in New Jersey and a senior author of the study, says that the results should be interpreted cautiously. Although he and his colleagues have helped to shed light on the anatomy of the retina, only experiments can conclusively prove that the system works as their model suggests. “We’re throwing this over to the physiologists now. They can test the hypothesis easily.”

“This is a very nice paper that poses a very clear and testable prediction about direction-selective computation in the retina,” says Botond Roska, a neuroscientist at the Friedrich Miescher Institute for Biomedical Research in Basel, Switzerland. “It’s an exciting idea, and I bet it’ll be followed by research from many labs trying test this hypothesis.”

Seung adds that the wiring diagram represents only a tiny proportion of the total number of connections on the retina. “There are probably other neurons that are a part of this motion-detection circuit,” he says. “We need to map those out and eventually reconstruct the entire retinal connectome.”

An earlier version of this article referred to Seung as being at MIT. After submitting his Nature paper however he has moved to Princeton; the article has been changed to reflect is most current affiliation.