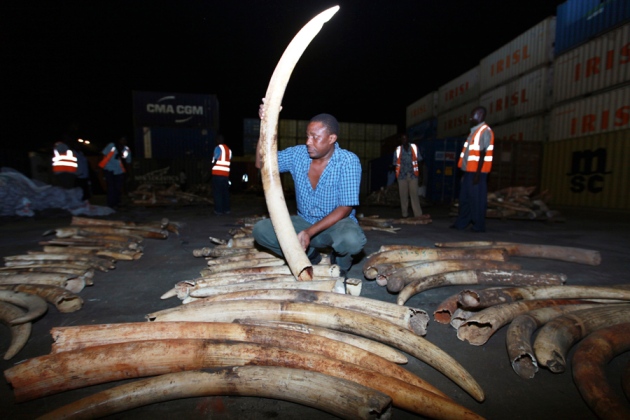 Seizures of ivory will now be forensically analyzed to track the trade in illegal ivory.

If you go into a bar in Bangkok tonight, don’t be surprised if you find it full of celebrating conservationists.

An international meeting that takes place every three years to regulate trade in endangered animals and plants has bolstered protection for a number of species. Besides agreeing to clamp down more strongly on the trade in ivory and rhino horn, the states party to the Convention on International Trade in Endangered Species of Wild Fauna and Flora (CITES) took the unprecedented step of granting protection to sharks and various species of tropical timber tree in their final vote today.

Before the conference, researchers across the world had warned of the dire state of African elephant populations, which are currently being decimated by rampant poaching. Many urged CITES to mandate forensic examination of large seizures of illegal ivory. Tusks' DNA can be used to trace their origins, so that law enforcement can be directed to poaching ‘hot spots’. The conference of the parties (COP) to the convention in Bangkok declared that such testing should be mandatory for large-scale seizures.

Tom Milliken, who works for the wildlife-trade monitoring group TRAFFIC, which is headquartered in Cambridge, UK and has been heavily involved in the debates about elephant poaching, said, “I think this is one of the best COPs I’ve been to, and I’ve been to 14 of them.”

“I was ecstatic because it was the first time that the entire COP acknowledged the value and need for DNA testing for the origin of poached ivory. All my hard work had finally paid off,” says Samuel Wasser, director of the Center for Conservation Biology at the University of Washington in Seattle and one of the driving forces behind the push for forensic examinations of elephant ivory.

The delegates also approved measures to curb demand for ivory, which could include public-awareness campaigns in countries driving the trade, such as China. Before the meeting, Tanzania removed one impediment to the discussion by withdrawing its proposal to sell stockpiled ivory, a move welcomed by Iain Douglas-Hamilton, a researcher at the University of Oxford, UK and the founder of the charity Save the Elephants, based in Nairobi.

“For the first time in 22 years there was no proposal to sell ivory. That meant we could start interacting constructively,” he says. Douglas-Hamilton adds that the demand-reduction move means that “we can now say with our hand on our heart that CITES supports campaigns to reduce the trade in ivory”.

Enforcement of rhino protection is also to be strengthened, with Mozambique and Vietnam now required to toughen up their controls on trade in horns.

Members of CITES also accepted that several species of shark — including the oceanic whitetip (Carcharhinus longimanus), scalloped hammerhead (Sphyrna lewini), great hammerhead (Sphyrna mokarran), smooth hammerhead (Sphyrna zygaena) and porbeagle (Lamna nasus) — should be added to ‘appendix II’ of the convention, which restricts trade in species not at immediate risk of extinction but in need of protection. Previously, CITES delegates have hesitated to interfere with trade in commercially valuable marine species, say many campaigners.

Conservationists see the move into timber as equally significant, with several tropical hardwoods, including ebonies and rosewoods, added to appendix II. “At the last CITES conference in Qatar I felt we didn’t get anything we wanted. This conference was entirely different,” says Leigh Henry, a senior policy adviser at the conservation organization WWF in Washington, DC. “The parties to CITES are really stepping up,” she says. “We got almost everything we wanted. The parties followed the science and did what was best for conservation.”