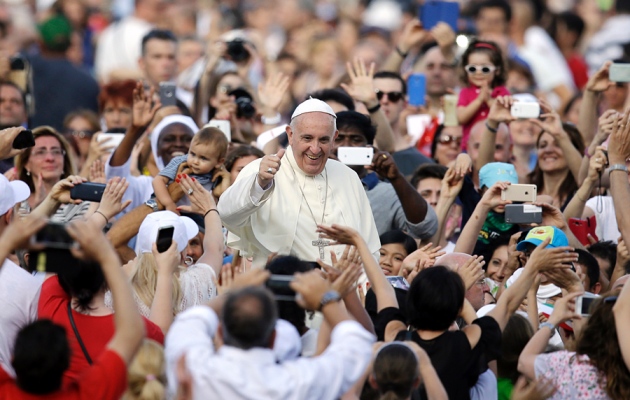 Pope Francis has come out more strongly against climate change than his predecessors did.

Pope Francis’s long-anticipated encyclical letter on climate change and the environment, officially released on 18 June, has generated huge media interest since it was leaked to the press three days ago. Never before has a Roman pontiff warned so starkly of existential threats to Earth’s environment — our “common home”, in the Pope's words — and human civilization. And never before has a pope drawn so resolutely from science, a sphere that has long been considered irreconcilable with essential Catholic religious beliefs.

To be sure, Laudato si' (Praise Be) is a faith-based document that views Earth as God's creation, something for humans to “fill and subdue”. But science is remarkably prominent in the letter. The Pope proclaims in no uncertain terms that the climate change now underway is caused by human activity and that the burning of fossil fuels must stop.

Here is Nature's selection of the most intriguing passages — and what they reveal.

Pope Francis agrees with the IPCC

On the science of climate change:

A very solid scientific consensus indicates that we are presently witnessing a disturbing warming of the climatic system.… It is true that there are other factors (such as volcanic activity, variations in the earth’s orbit and axis, the solar cycle), yet a number of scientific studies indicate that most global warming in recent decades is due to the great concentration of greenhouse gases (carbon dioxide, methane, nitrogen oxides and others) released mainly as a result of human activity.

This statement mirrors faithfully the basic conclusion at which the Intergovernmental Panel on Climate Change (IPCC) has arrived time and again. Cardinals who were involved in drafting the encyclical consulted leading scientists about the physical causes of climate change, so it is not surprising that science surfaces in the letter. But the Pope’s recognition of human-induced global warming is an unflinching rebuke to climate-change doubters who might have hoped to find an ally in the Catholic Church.

No wonder many scientists have greeted the encyclical with unusual enthusiasm. “It is unique in that it brings together faith and moral with the world of reason and ingenuity,” said climate scientist Hans Joachim Schellnhuber, director of the Potsdam Institute for Climate Impact Research (PIK) in Germany, at a Vatican press conference today in Rome. “I can testify that everything in the encyclical is in line with science.”

He has got his eye on politicians

On fossil fuels and renewable energy:

We know that technology based on the use of highly polluting fossil fuels — especially coal, but also oil and, to a lesser degree, gas — needs to be progressively replaced without delay. Until greater progress is made in developing widely accessible sources of renewable energy, it is legitimate to choose the lesser of two evils or to find short-term solutions. But the international community has still not reached adequate agreements about the responsibility for paying the costs of this energy transition.

The Pope’s climate call to arms comes just two weeks after leaders of the G7 leading industrialized nations pledged to end the fossil-fuel era. The Pope’s assertion that it is technically and economically feasible to replace carbon-rich coal and oil with cleaner sources of energy is in line with what many scientists think.

But the idea that the transition to clean energy is a moral imperative might be a more convincing argument to the more than one billion Catholics worldwide — and to the many non-Catholics with whom Pope Francis is popular — than any made by scientists and politicians.

A recent poll by the Pew Research Center in Washington DC shows that 71% of Catholic adults in the United States believe in global warming. Nearly half (47%) of Catholics attribute global warming to human activity, and 48% view it as a “very serious problem”.

“That message from a Pope who listens to the science comes exactly at the right time,” says Johan Rockström, a sustainability researcher at Stockholm University. “My bet is that it will have a positive impact on upcoming climate negotiations.”

Nations are set to meet in Paris in December for climate-change talks organized by the United Nations. The parties hope to reach an agreement to reduce greenhouse-gas emissions. The Pope could make a major statement on climate change at least one more time before that meeting: he is scheduled to address the UN General Assembly in September, and he is expected to urge political leaders to strike a new emissions deal.

He is sceptical of cap-and-trade schemes

The strategy of buying and selling ‘carbon credits’ can lead to a new form of speculation which would not help reduce the emission of polluting gases worldwide. This system seems to provide a quick and easy solution under the guise of a certain commitment to the environment, but in no way does it allow for the radical change which present circumstances require. Rather, it may simply become a ploy which permits maintaining the excessive consumption of some countries and sectors.

Scientists do argue over whether cap-and-trade systems are preferable to carbon taxes — but most would agree that carbon must have a price.

“If we want to avoid dangerous climate change, we have to restrict the use of the atmosphere by putting a price on CO2 emissions, says Ottmar Edenhofer, co-chair of the IPCC working group on climate-change mitigation and chief economist at PIK. “This would generate revenue, which could be used to improve access to clean water or education, especially for the poor.”

Rockström says that the Pope is ahead of the curve in questioning mainstream economic logic, but he worries that this could turn some people off. “It might lend the encyclical to be received as a leftist position not to be taken seriously,” he adds.

Climate science has a moral appeal

On biodiversity and governance of the ocean:

The earth’s resources are also being plundered because of short-sighted approaches to the economy, commerce and production. The loss of forests and woodlands entails the loss of species which may constitute extremely important resources in the future, not only for food but also for curing disease and other uses. Different species contain genes which could be key resources in years ahead for meeting human needs and regulating environmental problems.… International and regional conventions do exist, but fragmentation and the lack of strict mechanisms of regulation, control and penalization end up undermining these efforts. The growing problem of marine waste and the protection of the open seas represent particular challenges.

Such views echo concerns that have been frequently voiced by scientists and environmentalists.

“I find nothing remarkable in the Pope accepting mainstream science — things have moved on from the days of Galileo!” says Gavin Schmidt, a climate researcher with the NASA Goddard Institute for Space Studies in New York City.

What is important, he says, is that the Pope has grasped that climate and environmental science suggest that humanity should re-examine its values. “I might not agree with all of the reasoning here, but I strongly agree with him on that fundamental point.”