Amid a wave of recent journal article retractions, researchers are taking to social media to discuss a perennial favourite: a three-year-old paper looking at the relationship between a journal’s impact factor and its retraction frequency. Researchers also commented on an unexpected invasion of female Viking warriors into Facebook posts and Twitter feeds.

The 2011 report proposed a “retraction index”, a measure of the likelihood that a paper in a given journal will eventually be pulled from the literature1. The authors looked at articles published from 2001 to 2010 in 17 journals and plotted the journals’ retraction indexes against their impact factor. The result was clear: the higher the impact factor, the higher the retraction index. “You know ‘high impact’ journals? All that means is that work is more likely to be retracted,” tweeted Jon Tennant, who studies palaeontology at Imperial College London, earlier this month. David Basanta, a cancer researcher at the Moffitt Cancer Center in Tampa, Florida, responded on Twitter: “A case could be made that more people try to replicate the results.”

The index for a journal is the number of retractions in a given time period relative to the number of published articles with abstracts during the same period. Each of the 17 journals included in the analysis fitted the general trend, as shown in this figure from the paper, which was reproduced by some on Twitter. 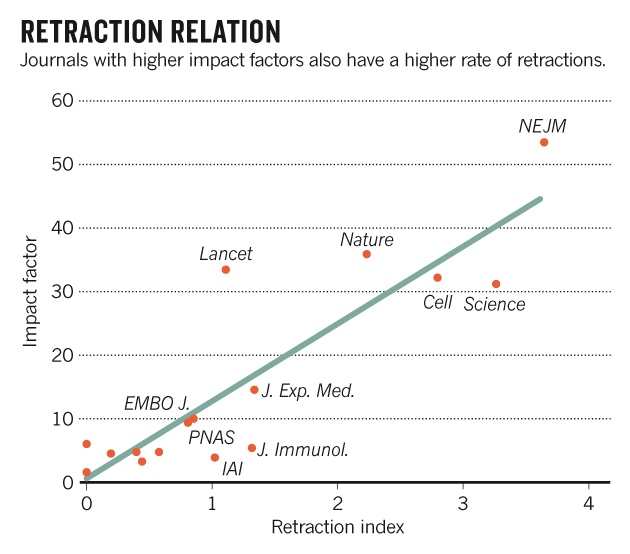 The paper’s two authors, each an editor-in-chief of a journal, saw no obvious explanations for the correlation. One possibility, they write, is that researchers might be more willing to cut corners or even commit scientific misconduct to get into a prestigious journal. They also note that papers in high-impact journals probably receive more scrutiny, making problematic articles harder to hide. Observers on Twitter had other ideas. Graham Davey, a psychologist at the University of Sussex, UK, tweeted:

Whatever the reason, it’s clear that the number of retractions across the board is on the rise, and perhaps because of this, the retraction-index paper has regularly popped up in the Twittersphere since its publication. Reached for further comment, Tennant said: “The paper is still relevant, especially given several recent horror stories regarding retractions and falsification of results.”

The retraction-index idea also fed into a recent blog post that took Nature to task on its retractions in 2013 and 2014 so far. Paul Knoepfler, a stem-cell scientist at the University of California, Davis, who in a previous blog post called for Nature to retract the controversial ‘acid bath’ stem-cell papers more than a month before the journal did, wrote that the rush of retractions might suggest that there is “too little scrutiny” in the editorial process. But it could also be a positive sign, he says: perhaps leading journals are showing less tolerance for flawed research, even if it is in their pages. Nature declined to comment.

Facebook and Twitter have been abuzz with the news of Viking women warriors who supposedly wreaked havoc on northern Europe more than 1,000 years ago. The frenzy started with a blog post earlier this month on a science-fiction website (run by Macmillan, which also owns Nature Publishing Group). The post, written under the pseudonym ‘Stubby the Rocket’, talked about an archaeological study of Norse burial sites2 in England, in which the bones of nearly half of the 14 bodies examined showed signs of being female. “Half of the warriors were female” declared the blog post’s title. Researchers, however, noted that the post strayed far from the original 2011 source. Toby Martin, who studies medieval archaeology at the University of Oxford, UK, tweeted:

Although one of the six Norse women in the study was buried with a sword and shield, the paper’s author Shane McLeod, a historian at the University of Stirling, UK, said in an e-mail that there’s no proof that she or the other women ever wielded such weapons. “Women and children seem to have been present with the armies which invaded England in the second half of the ninth century, but this of course does not mean that they were fighting in battles,” he says. That sword and shield could have belonged to the juvenile (of undetermined sex) who was buried alongside that woman, McLeod wrote in his article.

Kate Wiles, a linguist and medievalist at the University of Leeds, UK, noted on Twitter that the study contained an important lesson: “A skeleton with a sword isn’t automatically male.”