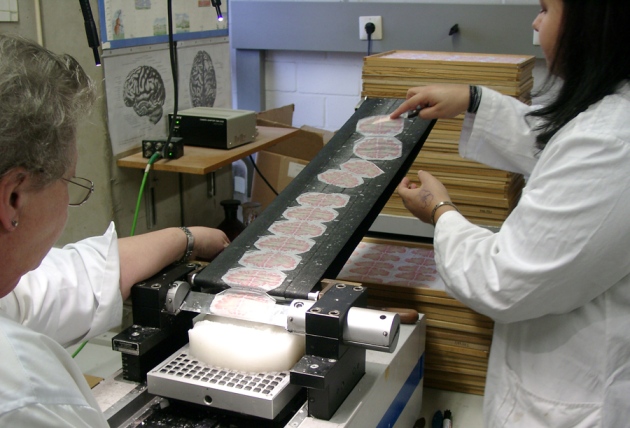 An international group of neuroscientists has sliced, imaged and analysed the brain of a 65-year-old woman to create the most detailed map yet of a human brain in its entirety (see video at bottom). The atlas, called ‘BigBrain’, shows the organization of neurons with microscopic precision, which could help to clarify or even redefine the structure of brain regions obtained from decades-old anatomical studies.

“The quality of those maps is analogous to what cartographers of the Earth offered as their best versions back in the seventeenth century,” says David Van Essen, a neurobiologist at Washington University in St Louis, Missouri, who was not involved in the study. He says that the new and improved set of anatomical guideposts could allow researchers to merge different types of data — such as gene expression, neuroanatomy and neural activity — more precisely onto specific regions of the brain.

The brain is comprised of a heterogeneous network of neurons of different sizes and with shapes that vary from triangular to round, packed more or less tightly in different areas. BigBrain reveals variations in neuronal distribution in the layers of the cerebral cortex and across brain regions — differences that are thought to relate to distinct functional units.

The atlas was compiled from 7,400 brain slices, each thinner than a human hair. Imaging the sections by microscope took a combined 1,000 hours and generated 1 trillion bytes of data. Supercomputers in Canada and Germany churned away for years reconstructing a three-dimensional volume from the images, and correcting for tears and wrinkles in individual sheets of tissue.

The researchers describe their results today in Science1, and will make the full data set publicly available online. It shows the brain at a resolution of 20 micrometres — 50 times higher than the typical 1 millimetre resolution of atlases based on whole-brain scans.

“This completely changes the game in terms of our ability to discriminate very fine structural and physiological properties of the human brain,” said study co-author Alan Evans, a neurologist at the Montreal Neurological Institute at McGill University in Canada, at a press conference on 19 June.

“Their quality really looks very high,” says Christof Koch, chief scientific officer at the Allen Institute for Brain Science in Seattle, Washington. The Allen Institute maintains its own human brain atlas, which provides structural data at slightly lower resolution than that of the latest study but includes extensive annotations and maps of gene expression2.

BigBrain is part of the Human Brain Project, a 10-year, €1-billion European initiative to create a supercomputer simulation of the human brain. Detailed knowledge of neuronal clustering could help to set realistic parameters for the simulation, says lead author Katrin Amunts, a neuroscientist at the Heinrich Heine University Dusseldorf in Germany.

Although the atlas shows data from only one person’s brain, it is an important starting point for interpreting data from other brains in the future, adds Van Essen, who compares BigBrain to the sequencing of the first human genome. “Getting a really accurate map in one individual is, I think, very valuable,” he says.

The atlas will serve as a reference with which other data sets can be aligned, and the BigBrain team plans to work with the Allen Brain Institute to link information from their two databases.

Since the BigBrain effort began in 2003, technology has advanced to enable researchers to scan human brain sections at a resolution of one micrometre. But completing another atlas at such a high resolution would create about 20,000 trillion bytes of data — more than the most advanced computers today could process efficiently, says Amunts.

“The technology is continuing to grow rapidly,” says Sean Hill, executive director of the International Neuroinformatics Coordinating Facility in Stockholm. But he notes that the problem of data management and processing will require more resources and attention as neuroscience shifts towards big data sets. “This is an example of something that is only going to increase in frequency,” says Hill.

Amunts says that the team is already working on mapping “brain number 2”.

The amount of data generated was 1 trillion bytes, not 10 trillion as originally stated.